Terrifying footage shows an injured hiker, 74, spinning rapidly in her stretcher below a helicopter during a mountain rescue in Phoenix

Horror footage shows an elderly hiker spinning around at a rapid speed in a hoist during a helicopter rescue in Arizona.

Video of the 74-year-old woman in an out-of-control spin as she is being flown for medication treatment on a stretcher went viral and was viewed millions of times after it was posted on ABC15’s Facebook page early on Tuesday.

Phoenix Fire Department responded to reports of the injured hiker Piestewa Peak, who had taken a ground level fall and sustained facial and head injuries.

She was put in a stretcher-like device that was lifted up from the ground to the helicopter. 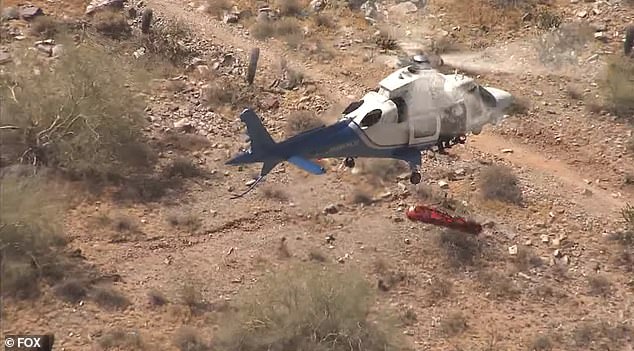 Horror footage shows an elderly hiker spinning around at a rapid speed in a red hoist, (pictured), during a helicopter rescue in Arizona

The video, which lasted 1 minute and 50 seconds,  shows the stretcher with the woman spinning rapidly as it is hoisted up.

The rate of rotation accelerated as the crew on the helicopter brought the basket closer to the rotors, ABC15 reported.

The crew’s efforts to stop the spin was hampered as a line intended to stop the basket from rotating broke at one point.

The department’s aviation unit held a press conference in response to the incident and claimed the woman had suffered no ill effects caused by the spin.

‘Sometimes when we bring the helicopter up from the ground, [the basket] will start to spin,’ said Paul Apolinar, chief pilot of the police department’s aviation unit.

‘We have a line attached to the basket that’s supposed to prevent that. Today it didn’t.’

Derek Geisel, who was piloting the helicopter during the rescue claimed that the line attached to the basket eventually broke and stopped working.

The spinning lasted for 40 seconds as the crew tried several times to raise and lower the basket.

‘When they start to lower the load, [the basket] does actually start to stop. And then we slowly brought it back up, it gets into the same downwash from the aircraft and it started to spin again.’ 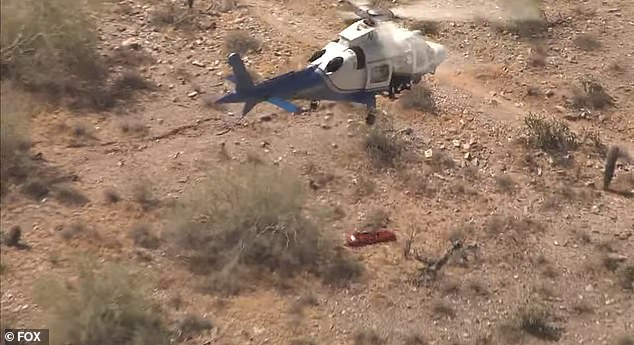 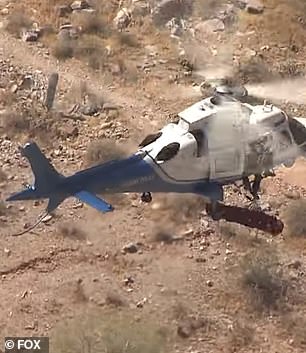 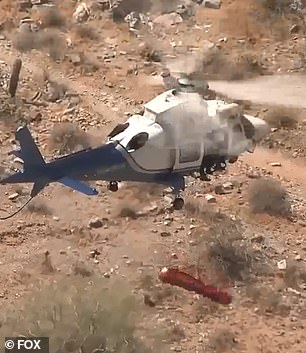 ‘Once we got the forward flight, the spin got to the point where they were safely able to bring the patient up to the aircraft,’ Geisel said.

The helicopter then landed at a parking lot at the base of Piestewa Peak. The woman was taken to a nearby hospital for evaluation.

Firefighters say the woman was nauseous and dizzy after the rescue, but is in stable condition.

She was not experiencing any other symptoms related to the spin, firefighters said during the press conference. 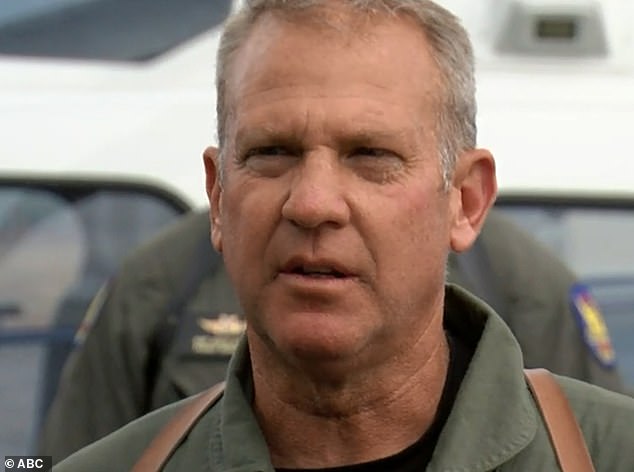 Derek Geisel, (pictured), who was piloting the helicopter during the rescue, claimed that the line attached to the basket eventually broke and stopped working

Members of the Phoenix Fire Department held a press conference to address concerns about the rescue operation on Tuesday after footage of the woman spinning went viral. Pictured in front is Assistant Fire Chief Shelly Jamison

He said: ‘She suffered no ill effect from that spin other than being a little bit dizzy, as soon as we landed with her at the base landing zone and got her to the definite treatment of the crews that were waiting.

‘They addressed the fact that she did spin, she had a little bit of dizziness and some nausea that they were able to give some medications for and reports are that she is stable and suffered no effects from the spin.

He said they responded to reports of a woman who had taken a ground level fall , had some facial and head injuries.

He claimed there were reports she had some ‘altered level of consciousnesses, feeling dizzy, and unable to assist in walking anymore.’

Apolinar, the chief pilot, said  the potential for the basket to spin] is something that’s a known phenomenon in the hoist rescue industry and it has been known to happen.

He added: ‘In the last six years, we’ve used a hoist 210 times on mountain rescues. In that time, we know of [a similar situation] happening twice.’