After more than a week of self-justifications and recriminations triggered by the leaking of the Do Better report into racism at Collingwood, Eddie McGuire stood before the media for the last time as president on Tuesday, and said goodbye.

He did it the only way he could: boasting of his achievements, of which there are many, admitting to his faults, his most recent dealing the final blow to his presidency, and putting on public display his deep emotional attachment to Australian rules football and his beloved club. A man who rarely took a backward step finally had to concede that to allow his club to move forward, it was time for him to bow out. It was painful for him, but was the right call. 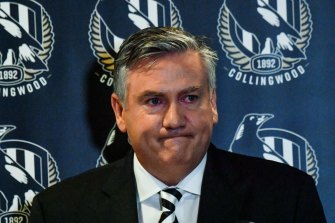 With McGuire joining the ranks of past presidents, it does offer the club for the first time in more than two decades the opportunity to reset and recalibrate. And the club’s response to the damning claims detailed in the Do Better report must sit atop the next president’s to-do list. With McGuire out of the public eye, it should give Collingwood the chance to do the hard work needed out of the spotlight that its president often attracted.

It’s not enough that McGuire has left the building – the problems were not confined to one man. Changing the culture and putting in place the necessary systems and structures, as the report called for, are essential if the club is to move on from its fraught history on racial issues.

The report makes clear that it takes more than right-minded people with good intentions. When players or staff at the club have a grievance related to discrimination there must be an external, independent review process that protects the whistleblower. When such claims are proven to be legitimate, there must be accountability and consequences for those who perpetrated the discrimination.

It must also face its past not through the lens of protecting the reputation of the club, but through the eyes of those who believe they were wronged. It has made progress, implementing programs that support and promote inclusion, but it still has work ahead of it.

These benchmarks should not just be for Collingwood, but for every sporting club in Australia.

Discrimination is not unique to any sporting code, or level of professionalism. It will infiltrate any club that is not vigilant. That is why the Do Better report should be must reading for each and every club that is committed to ensuring that on and off the field its players and staff are treated with respect.

Australia has always prided itself on the ideal that sport is a pastime where skill and courage take precedence over social hierarchy based on class, heritage or wealth. As Collingwood has shown, the truth of that ideal is sometimes far from reality.

The way forward is probably best said by the last line of the Do Better report: “Now is the time for the Collingwood Football Club to meet the moment.” That moment will no longer be one for McGuire to oversee. The Age wishes whoever fills his shoes well in ensuring that the club not only rights the wrongs of the past, but restores its pride in what it does on and off the field.

Note from the Editor

The Age’s editor, Gay Alcorn, writes an exclusive newsletter for subscribers on the week’s most important stories and issues. Sign up here to receive it every Friday.