Traditionally, Sarah Gardner’s festive calendar resembles that of many Australians: Christmas with the extended family, cricket and perhaps a spot of shopping on Boxing Day, then a run of family engagements culminating in a New Year’s Eve house party.

But this year, she says, “we’re just going to leave”.

“On Christmas night, once we’re done with family, we’ll drive to our beach shack down the coast. It’s not like us to do that, but we’re clocking out.” 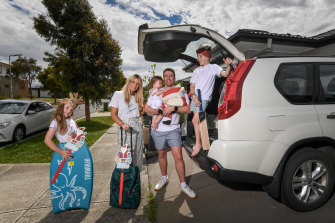 The Gardner family – (from left to right) Olivia, Sarah, Chloe, Tim and Luke – will celebrate the festive season differently this year, opting to hit the road and visit their Inverloch beach shack on Christmas night. Credit:Justin McManus

And Ms Gardner doesn’t want it to be a one-off. She expects this year to be the first of a new tradition with her husband Tim and their three children.

Despite Victoria now being free of its most onerous coronavirus restrictions, the 2021 festive celebrations promise to look different to most.

Tickets for the viewing areas to watch Melbourne’s New Year’s Eve fireworks are strictly limited and people still face the prospect of having their vaccination status checked regularly.

So, many families, including the Gardners, have decided to do things differently.

“We bought the shack in Inverloch in April this year and within weeks we were in lockdown. Time is so precious, that’s what came out of COVID for us,” she said.

“We want our kids to be running around again and meeting new friends after a year of playing Uno what felt like 57 times every week.”

What’s on this Christmas

Tens of thousands of revellers are still expected to descend upon Melbourne on New Year’s Eve.

The City of Melbourne will establish four celebration zones at Docklands, and the Flagstaff, Alexandra and Treasury gardens, each featuring DJs and bands.

Rather than city-wide rooftop fireworks when midnight strikes, each site will host its own display at 9.30pm and midnight.

Up to 42,000 visitors will be accommodated but walk-ups will be off the cards. Tickets must be acquired in advance through a ballot or, if any are leftover, via the council website.

Lord mayor Sally Capp is also spruiking Australia’s “largest-ever drone show”, where 350 drones, programmed to music and poetry, will fly above Docklands twice each night between January 3 and January 30, as well as on New Year’s Eve.

“We’ve decked the city with thousands of decorations, and we are rolling out a program of spectacular new attractions, including a maze, a festive night market (at Queen Victoria Market), a Christmas Carnival (at Birrarung Marr) and a giant floating art installation on the Yarra River – Birrarung,” she said.

What’s on this New Year’s Eve

For those seeking culinary stimulation on New Year’s Eve, the Street Feasts festival will invite 30 restaurants to serve their specialties on seven famed Melbourne laneways.

Before 2022 arrives, there’ll be an opportunity to enjoy some of the city’s enduring Christmas traditions.

The Myer Christmas window display, now in their 66th instalment, will stay open until 10pm on Christmas Eve, offering families a depiction of Beatrix Potter’s The Tale of Peter Rabbit.

The Sidney Myer Music Bowl will host Carols by Candlelight – now in its 84th year – in front of 10,000 fully-vaccinated attendees on Christmas Eve.

Families can have Santa photos taken at Federation Square and most major shopping centres. However, some, including at David Jones, will have a particular pandemic feel with family members able to gather but Father Christmas practising social distancing.

Council-supported Christmas light demonstrations were cancelled due to the pandemic but many homes on prominent streets have set up their own displays.