SO how much plastic will YOU eat today?

I imagine your answer will be none. After all, why would you eat plastic? Yuck, right? 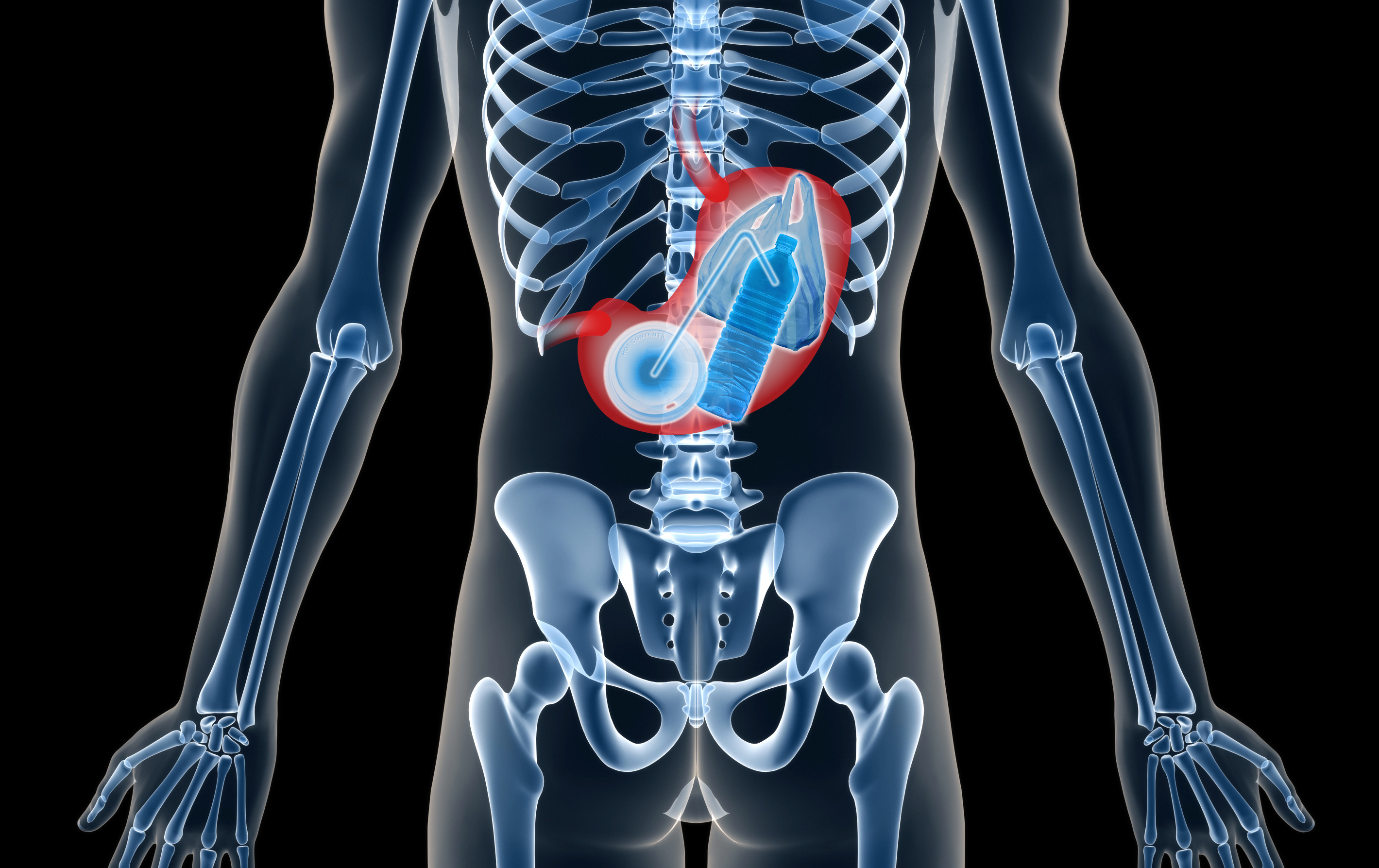 Well, yesterday we learned that we are all eating and drinking it, every single day.

The average person eats up to 120,000 tiny pieces of plastic each year. This plastic dust is released into the environment by products including bags and clothing.

The study, carried out by experts at the University of Victoria in Canada, is thought to be the first to estimate how much plastic humans consume — and it is truly shocking.

But recalling the sea of plastic laid out in front of me for a recent TV experiment, it is easy to understand why and how this can happen.

As part of the new three-part BBC documentary War On Plastic, I asked residents on a street in Bristol to bring out as much plastic as they could find in their homes — and revealed just how much can pile up in an average household.

And they are not alone. As part of the programme, I foolishly agreed to look at how much plastic is in my OWN home — and quickly realised it is everywhere.

Plastic is one of the biggest issues of our time. Like everyone else, I was affected by the shocking scenes in Blue Planet of a turtle caught in a plastic sack and dead birds with their legs entangled in plastic bags.

And after speaking to the residents on the street in Bristol, I quickly identified the biggest source of single-use plastics — the supermarkets. 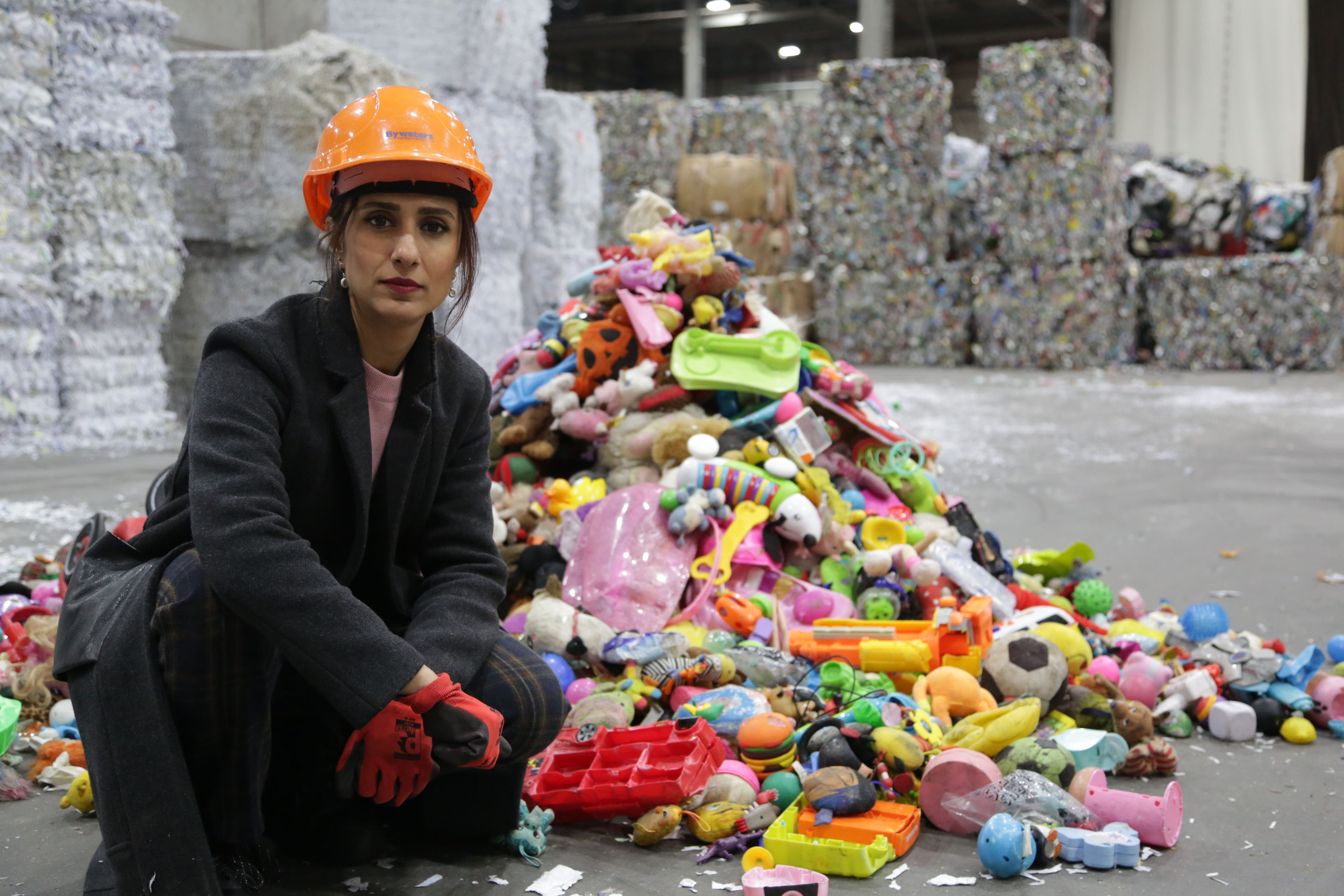 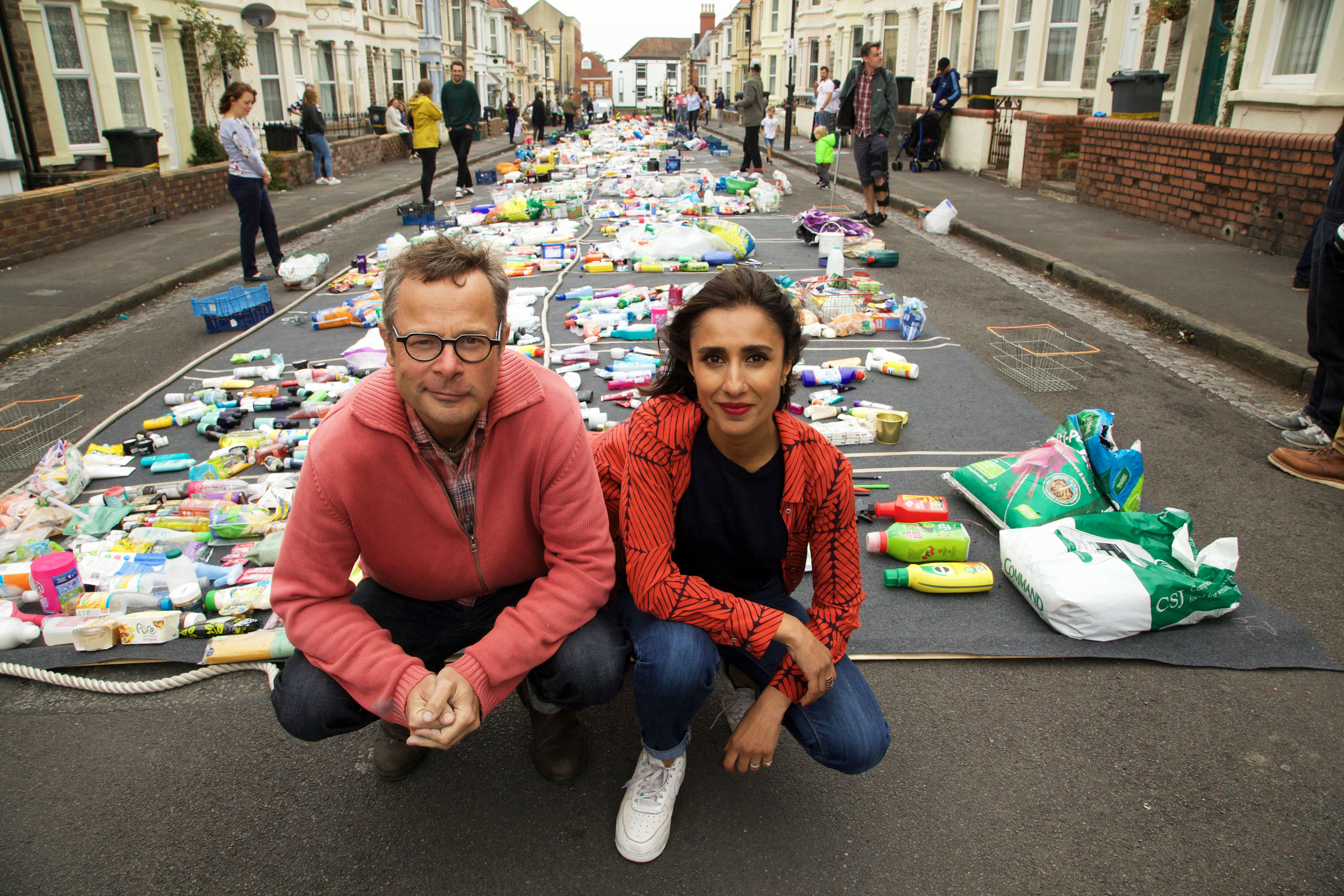 More than a third of our plastic packaging comes from the ten leading supermarket chains. That is roughly 800,000 tonnes every year.

There is definitely some produce that needs plastic to stay fresh. But it seems to me more about shifting their products than giving us real choice.

Even if you want to buy stuff loose, you often can’t. And that is infuriating.

When residents on our street tried to buy food without the unnecessary packaging, they were horrified to discover that some supermarkets actually charge LESS for fruit and veg wrapped in plastic. Where is the incentive?

I contacted big businesses like these to challenge them about what they are doing to reduce the plastic in their products.

Of all the supermarkets we contacted, only Tesco agreed to a meeting. At its HQ, we were told of its trial to remove a selection of plastic-wrapped fruit and vegetable where loose alternatives are available.

This trial was only happening in two of its stores, though. And as Britain’s biggest retailer, it is a small drop in a plastic-polluted ocean.

The only effective way to get plastic out of our system is to reduce it. Greengrocers have been using traditional brown paper bags for decades. 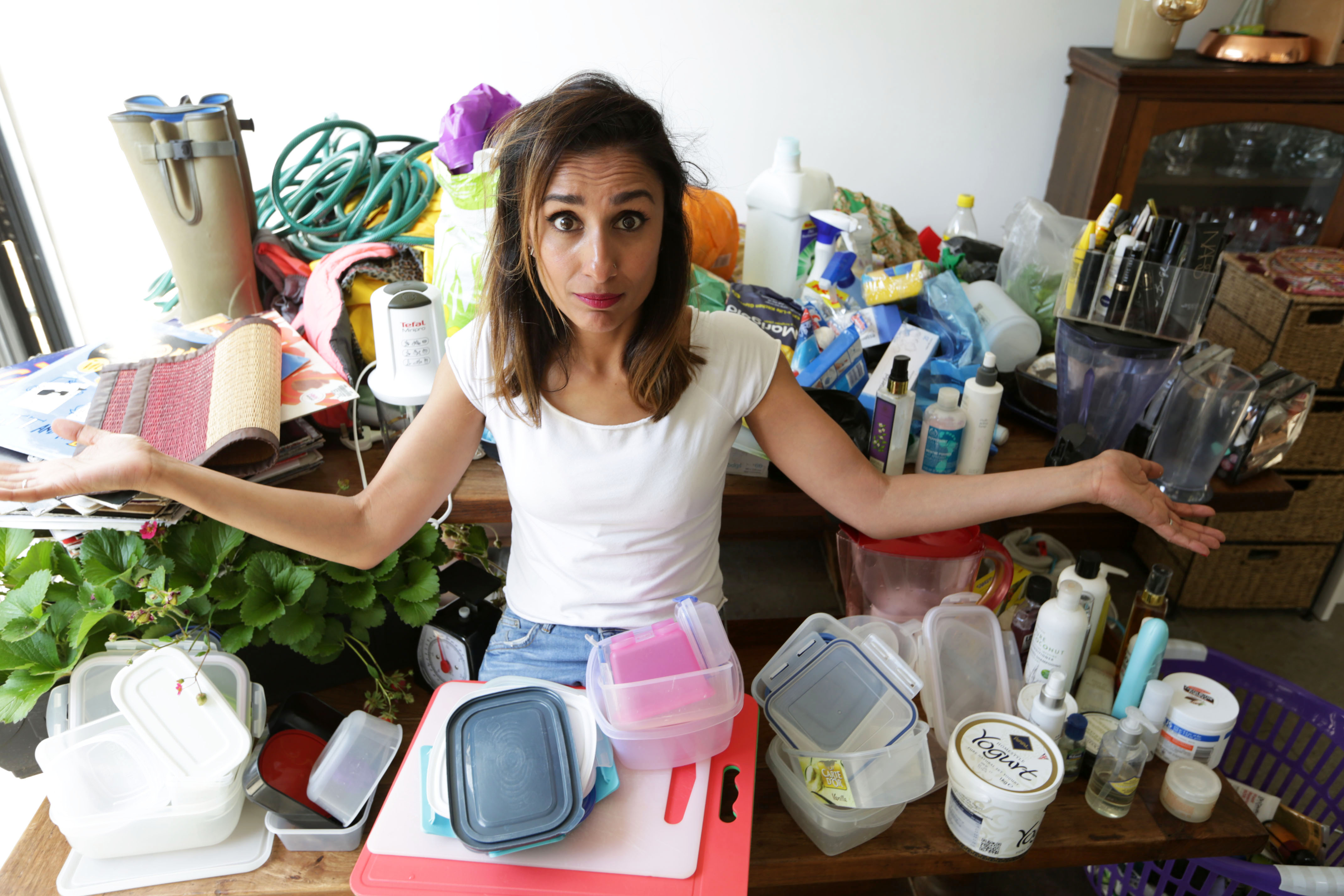 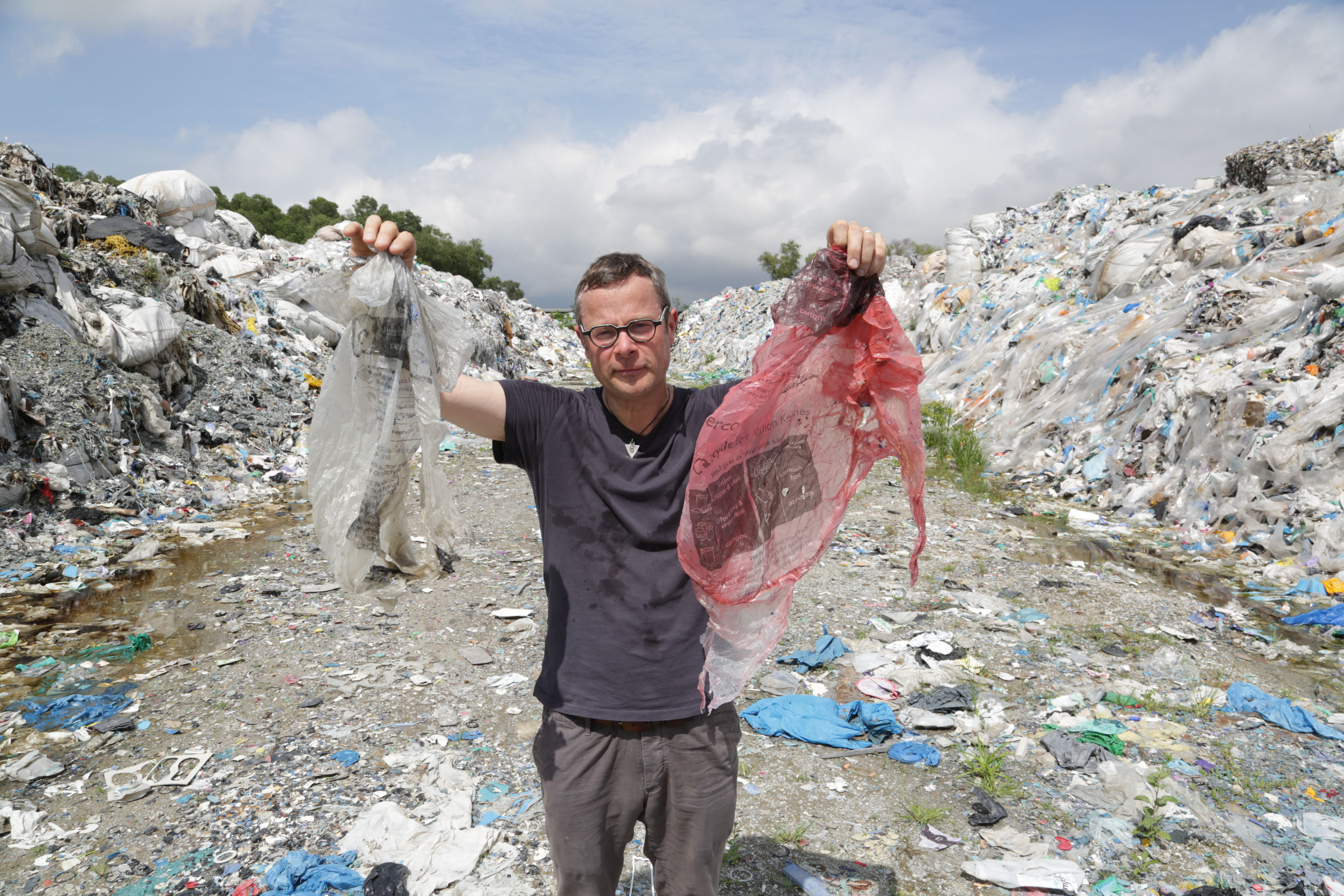 Waitrose has launched a packaging-free trial at its Oxford store, allowing shoppers to fill their own containers with a range of products, such as pasta and cereal.

This is a brilliant idea and shoppers are even being offered an incentive, with products in its unpacked refill stations being up to 15 per cent cheaper. It is something all supermarkets should be doing.

And as consumers, there is so much we can do too.

Tell supermarkets what you really think of the piles of plastic they use and even hand it back — yes, supermarkets say they are happy to dispose of unwanted plastic for us.

I am not saying all plastics are bad, including those that use “greener” materials such as bioplastics. But we should all try to reduce the amount of single-use plastic we get through — because once it has served its purpose, it is just thrown away.

We need to start by changing our shopping habits.

Each year Brits use 13 BILLIION plastic bottles, and with each taking 450 years to decompose, it is little wonder they are the most common item of litter to wash up on our beaches.

You could drink the water in your toilet — that is how wealthy our country is — yet we still choose to buy bottled water.

Scientists say it is no better for us than tap water. And during the programme, my co-presenter Hugh Fearnley-Whittingstall carries out a cheeky experiment which reveals unsuspecting members of the public couldn’t even tell the difference.

It is not just bottles, though. As the biggest toy distributor on the planet, McDonald’s is a major culprit. The toys you get in Happy Meals are the most disposable bits of tat.

Many parents will tell you children play with them for a few minutes then they are chucked away.

It’s often also hard to know what plastic can be recycled, with nearly half of people admitting to arguing about what is and isn’t recyclable.

Since China stopped accepting rubbish from around the world, Malaysia has become one of the biggest importers of British waste plastics.

Hugh travelled to Malaysia to investigate what happens to it. Instead of being recycled, he finds piles of our plastics rotting on illegal dumps.

It is a disturbing sight and among the 20ft-high mountain of plastic are local authority-branded recycling bags.

So we are doing our bit by putting it in the recycling bin, then it is being dumped in another country to become someone else’s problem.

But it is our problem.

The dump also contains millions of tiny, ground-up bits of plastic that will go into nearby rivers and affect marine life, spreading the pollution far and wide.

We can’t ignore the damage plastic is doing to our planet. We all need to do our bit to help turn the tide.