Victoria processed more than 17,000 tests on Tuesday, a similar figure to Monday.

Victoria's 19th 'double doughnut' day comes as the country waits for confirmation of any additional new cases in a cluster in Adelaide's northern suburbs which grew by five on Tuesday. There are now 34 active cases in South Australia.

Truck drivers travelling between Victoria and South Australia will begin being tested from Thursday on the Victorian side of the land border, Health Minister Martin Foley said on Wednesday morning.

"We'll also be asking the same principles that the South Australian Premier has asked his community to do, that if you are travelling from South Australia to Victoria, please don't come right now and only restrict it to essential travel," he told Nine's Today program.

"The exception to this of course is the border communities where we'll continue the bubble that is in place between the Victorian and South Australian small regional border towns." 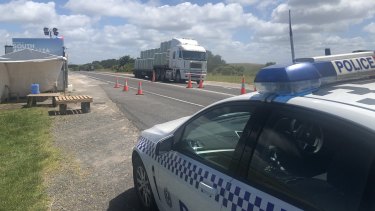 The SA outbreak has caused Western Australia, Queensland, Tasmania and the Northern Territory to close their borders to SA travellers – requiring any inbound passengers two quarantine for two weeks upon arrival.

Victoria, alongside NSW and the ACT, is keeping borders open and screening South Australian passengers at airports. From Thursday only truck drivers will be screen at the land border.

"No border restrictions have been imposed at this stage, but we are continuing to monitor the situation in South Australia," Victoria’s Deputy Chief Health Officer Professor Allen Cheng said on Tuesday.

"All cases in the outbreak in South Australia have known links and are currently within metropolitan Adelaide, so the risk to Victoria’s border communities is low."

Two flights carrying 122 passengers arrived at Tullamarine airport from Adelaide on Monday, with 81 tested for COVID-19. No flights arrived at Melbourne or Mildura on Tuesday, with two more flights expected on Wednesday afternoon.

Screening entails taking names and contact details of SA travellers, an interview about where they have been and temperature and symptom checks. Only certain passengers are being required to be tested and quarantine.

"People in South Australia who have been at a high-risk location are required to quarantine, and the South Australian border is closed to most travellers from Victoria," said Professor Cheng.

"We are also putting in place a range of other measures, including screening arrivals at Melbourne Airport, alerting aged care facilities and hospitals and continuing wastewater testing in western Victoria."

No flights are scheduled into Melbourne airport or Mildura airport today from Adelaide. The next flights expected from Adelaide are due to arrive tomorrow.

There still remains three active cases in Victoria, two of which were still in hospital as of Tuesday.

Public health officials have explained the long active period for the remaining three cases as being attributed to people who may be immuno compromised or still have symptoms beyond the 10 day isolation period.

People recover from COVID at different rates, according to the Department of Health.