CNN commentator Van Jones broke down in tears as he delivered a highly emotional live reaction to the network calling the presidential election for Joe Biden.

Jones was forced to compose himself as he claimed it’s ‘easier to be a parent this morning’ and said that the end of Trump’s presidency would make life ‘easier for a whole lot of people’.

The 52-year-old father of two added that Biden’s win shows that ‘being a good man matters’ and hopes he ‘sons look at this’.

The former Obama administration adviser spared a moment for Trump supporters stating that he was sorry that they lost but that ‘for a whole lot of people it’s a good day’. 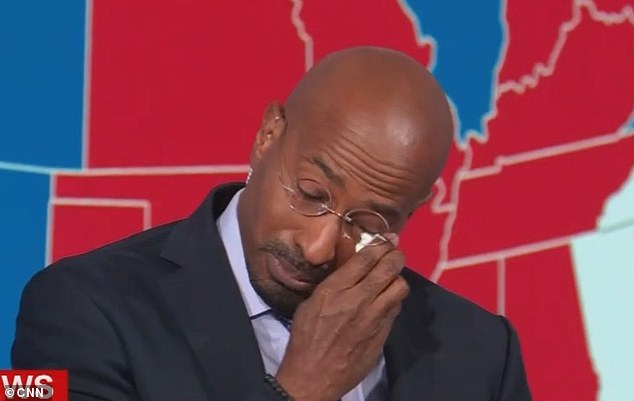 CNN commentator Van Jones, pictured, broke down in tears as he delivered a highly emotional live reaction to the network calling the presidential election for Joe Biden

Jones was asked for his thoughts seconds after CNN and multiple other TV networks called the race and protected that Biden is president elect.

He immediately had to compose himself as he began his impassioned take and stopped on several occasions through to wipe his tears.

‘It’s easier to be a parent this morning,’ he began.

‘It’s easier for a whole lot of people,’ he added, before listing different groups who had been affected by Trump’s presidency.

‘If you’re a Muslim in this country, you don’t have to worry if the president doesn’t have to want to here,’ he said. 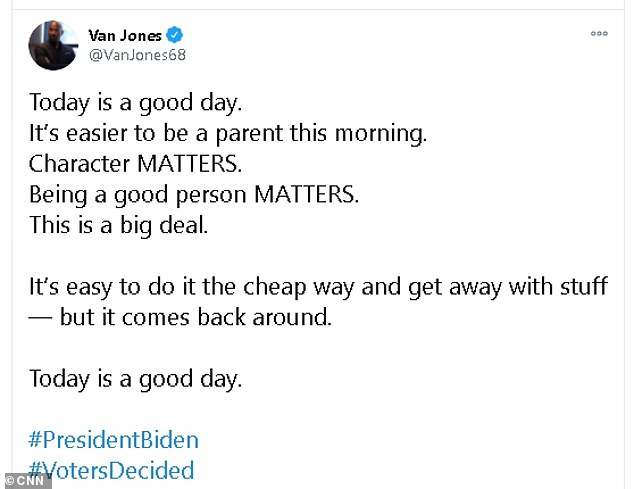 Jones also repeated his statement on Twitter as he said: ‘Today is a good day’

Your browser does not support iframes.

‘If you’re an immigrant, you don’t have to worry if the president is going to be happier to have babies snatched away, send dreamers back for no reason.

‘It’s vindication for a lot of people who have suffered,’ he continued before referencing Black Lives Matter.

‘I can’t breathe wasn’t just George Floyd, that was a lot of people who felt they couldn’t breath,’ he said.

‘Every day you’re getting these tweets and you just don’t know.

‘You go into the store and people who have been afraid to show their racism have been getting nastier and nastier to you and you’re worried about your kids.

‘Your sister, can she just go to Walmart and get back into her car without somebody saying something to her and you spent so much of your life energy just trying to hold it together.

‘This is a big deal. For us just to be able to get some peace and have a chance for a reset. The character of the country matters.

‘I’m sorry for the people who lost, for them it’s not a good day,’ he concluded, ‘but for a whole lot of people, it’s a good day.’ 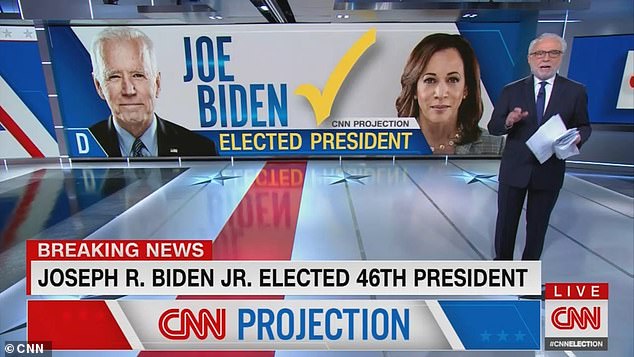 It’s over: CNN calls the election for Joe Biden and Kamala Harris on Saturday morning 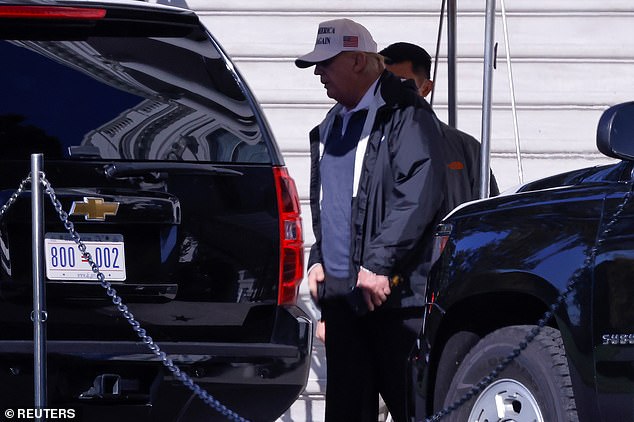 The President was dressed casually with a white MAGA hat and sweater as he went to play a round of golf Saturday, just before Biden was announced as the next president

Biden was named the next president of the United States at 11.25 a.m. Saturday morning by television networks and the Associated Press – as Trump played golf.

CNN, NBC, ABC, CBS, the AP and USA Today all made the call and Fox News followed suit 10 minutes later.

Biden will address the nation tonight.

Votes in Philadelphia pushed his margin in must-win Pennsylvania to 34,558, more than 0.5%, just after 11am – putting the result in the state beyond doubt.

That took him to 273 electoral votes – placing the 77-year-old on a clear path to the White House.

The states of Nevada, Arizona, Georgia and North Carolina were still to be called. Biden was ahead in all but North Carolina, and if he stays that way he will have 302 electoral college votes, the same as Trump in 2016.