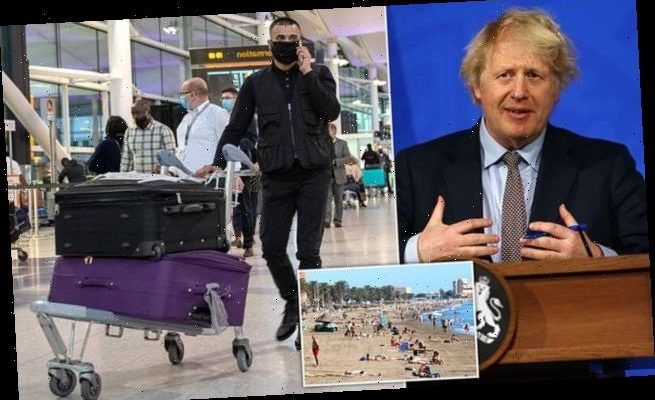 ‘Let’s get Britain flying now!’: Tourism bosses say vaccine rollout success means Brits should be allowed summer holidays in 130 countries around the world as Boris Johnson is warned more than a million jobs are at risk

The UK’s vaccines rollout means it is safe for Brits to take summer holidays in more than 130 countries, a new report claims today.

A study commissioned by Manchester Airports Group says that most of Europe, the Caribbean, north Africa and the United States should be on the destination list.

The report, submitted to the Government’s travel task force – which is due to outline its own plans next Monday – says it should be possible to allow people to visit countries with higher coronavirus rates that last summer without ‘increasing the risk of putting pressure on the NHS’.

Currently all leisure travel is banned until May 17 at the earliest, with fears that a spike in Covid cases in Europe and a death rate of more than 1,000 a day in the US will keep foreign flights off the menu for some time.

However, business leaders last night united with MPs to plead with the Prime Minister to be ambitious as they warned that more than a million jobs were at risk if Boris Johnson failed to get Britain flying again.

In letter to the PM, they said firms across the country faced devastation if planes were kept grounded. 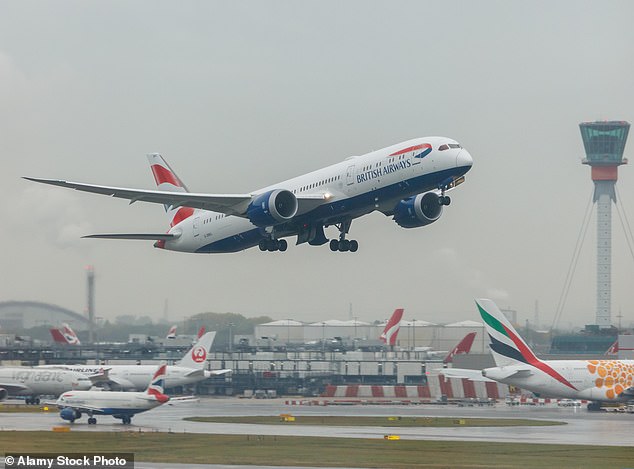 Business leaders have united with MPs warning the Prime Minister that millions of jobs are at risk if Britain does not get flying again. Pictured: Passengers arrive at Heathrow last summer

The PM has pencilled in May 17 as the earliest date when foreign travel could resume, but there are fears he will push this back as the continent is hit by a third coronavirus wave.

Mr Johnson will give an update on his plans on Monday, but sources say he is likely to declare it is still too early to set a firm date for when borders can reopen.

Following pleas from a group of 40 MPs earlier this week, industry leaders from the British Chambers of Commerce, Federation of Small Businesses and UK Hospitality said the economic recovery would be put at risk if overseas trips remained illegal.

‘If we cannot start flying again this summer, the further damage to UK businesses large and small would be severe,’ they wrote.

‘Aviation is vital to the UK’s economic recovery from the pandemic. Our air links are not a frivolous luxury.

‘They connect Britain with the world and link British products, experiences and expertise with billions of potential buyers overseas.’

The business groups said the success of the vaccine rollout ‘should allow us to push on with rebuilding the businesses, jobs and livelihoods that have been hit so hard by our forced isolation’. 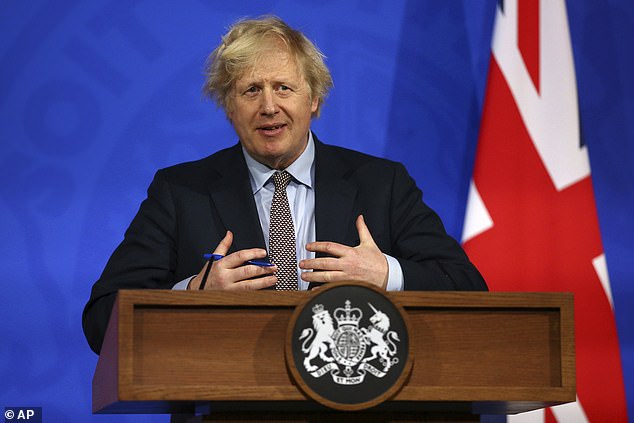 The PM has pencilled in May 17 as the earliest date when foreign travel could resume, but there are fears he will push this back as the continent is hit by a third coronavirus wave

Their warning was boosted by research showing the economy will take a £47.6 billion hit if Mr Johnson delays the resumption of foreign travel from May 17 until the end of the year – the equivalent of £200 million a day.

The study commissioned by Airlines UK, British Airways, Virgin Atlantic, Heathrow, Gatwick, and Manchester Airports Group warned this would put more than a million jobs at risk across the economy, including 125,000 in the international tourism sector.

Holidaymakers must wear face masks on Spanish beaches this summer – even while sunbathing, officials said yesterday.

Children over the age of six will be included in the rule, the country’s government announced.

Tourists breaking the law, which comes into force today, could be fined £85.

The rule applies across Spain, including the Costa del Sol and Canary Islands.

Masks will not be needed while swimming in the sea or exercising outdoors.

The report stated that ‘plotting a clear course out of lockdown for the aviation industry… is vital not only for the survival of the industry itself but also for the recovery of the wider UK economy’.

‘The UK is, fundamentally, a trading nation and has been for centuries. Its wealth and prosperity are inextricably linked to its ability to interact with global markets. Without air travel, this ability is severely limited.

‘It needs to be remembered that air travel is not just about holidays. A significant proportion of passengers travel for business and air transport also plays a central role in moving cargo around the world.

‘The UK’s ability to develop export markets, to source materials and expertise from overseas, to attract foreign direct investment, and to bring international visitors to the country is dependent on air travel.

‘The longer that the reopening of international travel is delayed, the greater the economic cost will be to the UK’s economy.’

Tim Alderslade, chief executive of Airlines UK, said: ‘There are tens of thousands of jobs dependent upon aviation and restarting travel, and the sector cannot survive another lost summer with little or no revenue.

‘We can do this proportionately and in a risk-based way – it’s not a question of opening up the border to every country out there.

‘Where it is safe to do so we need to start the process of opening up. We cannot with a straight face talk about Global Britain without aviation.’

Scotland First Minister Nicola Sturgeon fuelled suspicions Mr Johnson will delay plans to resume foreign holidays, saying: ‘The four-nations discussions we’ve had in recent weeks would make me sceptical about whether international travel would resume in England from May 17.’ 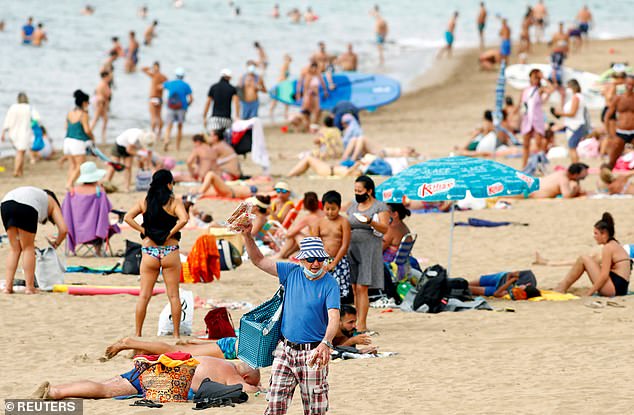 Following pleas from a group of 40 MPs on Monday, industry leaders from the British Chambers of Commerce, Federation of Small Businesses and UK Hospitality said the economic recovery would be put at risk if overseas trips remained illegal. Pictured: A beach in the Canary Islands

Malta has become the latest country to welcome British tourists as it says anyone who has had two Covid jabs will be able to enter from June 1.

The small island nation in the Mediterranean said UK travellers who have had both doses of a coronavirus vaccine will be allowed to enter from June 1.

Passengers will need to show their vaccination card before boarding flights, according to the Malta Tourism Authority (MTA).

But the UK is on Malta’s red list of countries, which means non-vaccinated travellers are banned from entering.

Meanwhile, Britons hoping for a staycation in the summer were today given fresh hope after a SAGE expert claimed today there has never been a Covid-19 outbreak linked to a beach.

Images of crowded beaches across the UK drew outrage last summer as people flocked to Britain’s coastlines amid uncertainty about foreign travel.

Police were forced to step in and asked people to stay away from some popular spots over concerns that social distancing was impossible on the crammed beaches.

But Professor Mark Woolhouse, an epidemiologist at the University of Edinburgh, told MPs on the House of Commons Science and Technology Committee today that no Covid outbreak anywhere in the world has been traced back to a beach.

He said: ‘Over the summer we were treated to all this on the television news and pictures of crowded beaches and there was an outcry about this.

‘There were no outbreaks linked to crowded beaches. There’s never been a Covid-19 outbreak linked to a beach ever anywhere in the world to the best of my knowledge.’

Experts believe that fresh, breezy air and warm temperatures cut the risk of the virus spreading.

His comments give further indication that staycations will be allowed this summer as stays in self-catered holiday lets, second homes or larger hotels would return in the first half of April, potentially just after Easter, under plans discussed with industry figures.

However, Professor Woolhouse warned that other outdoor mass gatherings – such as horse racing or football matches – were still risky because they have even less opportunity for social distancing and there are ‘pinch points’ at entrances, toilets and food stand.

The travel industry letter in full

Dear Prime Minister Aviation is vital to the UK’s economic recovery from the pandemic. Our air links are not a frivolous luxury.

They connect Britain with the world and link British products, experiences and expertise with billions of potential buyers overseas.

Pre-pandemic, some 49 per cent of the total value of UK exports outside of the EU travelled by air – a majority on board passenger aircraft.

If we cannot start flying again this summer, the further damage to UK businesses large and small would be severe – hundreds of thousands of jobs at risk, hospitality devastated, exporters unable to move their goods.

A safe, managed restart is the way forward, with restrictions remaining on high-risk countries, but air links re-established where the risks of variants is low and where the UK’s vaccination success should allow us to push on with rebuilding the businesses, jobs and livelihoods that have been hit so hard by our forced isolation.