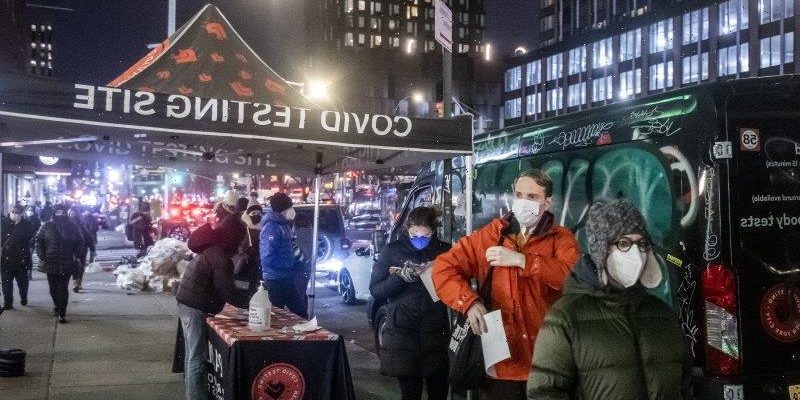 Washington: Health officials’ recommendation this week to shorten the isolation period for people with asymptomatic coronavirus infections to five days was driven largely by the concern that essential services might be hobbled amid one of the worst infection surges of the pandemic.

The administration’s top health officials met over Christmas weekend to discuss the trajectory of the US outbreak, with several expressing fear about how high case levels might climb in the coming weeks, according to four senior officials briefed on the discussion.

They worried the sheer volume of infections could mean that tens of thousands of police, firefighters, grocery workers and other essential employees would be out of work, making it challenging to keep society functioning, even though many of the infections would be mild or produce no symptoms. 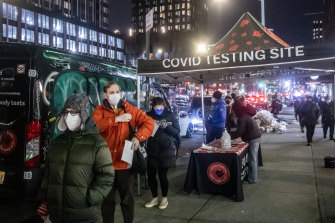 This week, the US recorded a record daily number of positive COVID diagnoses. Credit:AP

While Omicron is the most transmissible variant yet, it appears to have less severe effects than the Delta variant and, so far, a smaller percentage of those infected end up hospitalised, according to international studies and early data from US hospitals. Those who are vaccinated, and especially those who are boosted, are likely to have mild or asymptomatic infections, early research shows – a finding that also helped drive the recent change in guidance.

The decision to cut the recommended isolation time in half, which was hailed by business groups and slammed by some union leaders and health experts, reflects the increasingly tough decisions health officials navigate as they seek to strike the right balance between vigilance and normalcy as the nation heads into the pandemic’s third year.

Even with a surging variant, President Joe Biden has said he is not looking at lockdowns and stressed that people who are vaccinated and boosted do not need to fundamentally change their lives as they did at the start of the pandemic.

The guidance by the Centres for Disease Control and Prevention “was based on the anticipation of a large number of cases might impact societal function,” the agency’s director Rochelle Walensky said in an interview. “There were starting to be limitations in society, not just in our health-care workforce but in other parts of society. We were seeing infections in many places that we realised this could be a harbinger of many other essential workers we needed.”

The decision comes as the Omicron variant pushed the seven-day average of new daily cases in the United States to 266,889 on Tuesday (Wednesday AEDT), surpassing the previous high of 248,209 cases on January 12. Those numbers do not include the results of thousands of at-home tests since many people do not report those results to their doctors.

Biden was briefed on Monday by his COVID response team on the CDC’s decision to revise its guidance, according to a senior White House official. The White House stressed that the agency had reached its own conclusion. “We’re tracking it. We’re being kept abreast,” said Kevin Munoz, a White House spokesman. “We’re not making the decision.”

The guidance suggesting those with no symptoms or whose symptoms are resolving may cut their isolation time from 10 days to five and then mask for an additional five days has been criticised by some experts and union leaders, who say it is based more on economic, than health, considerations.

The president of the nation’s largest nursing union said that the recommendation would lead to increased viral spread because many will resume activities – or be pressured by their employers to resume them – while they are still infectious.

“It’s only going to lead to more illness, more cases,” Jean Ross, president of National Nurses United, said during an appearance on CNN.

Sara Nelson, president of the Association of Flight Attendants, said she is concerned the guidance is so closely aligned with the requests of business leaders.

“No worker should be forced to come to work when they’re still sick,” Nelson said on CNN. “We’re very concerned about that.”

The agency also cut the recommended quarantine time from 10 days to five days for those exposed to the virus who are not yet boosted and showing no symptoms, adding that they, too, should wear a mask for an additional five days.

Besides the concerns about keeping society functioning, the CDC’s decision was based on a growing body of scientific evidence, as well as internal agency modelling, showing that people are most infectious in the one to two days before they develop symptoms and the two to three days after, Walensky said. Most people will not get tested until they start developing symptoms, she added, meaning that by day five of isolation, they will be far less likely to transmit the virus.

After the agency updated its quarantine and isolation guidance for health-care workers last week to stave off staff shortages, officials realised numerous industries would face the same challenges, Walensky said. After conversation through the Christmas weekend, they realised they would also have to put out guidance for others, Walensky said.

“We have had to be . . . able to update our recommendations in real time for the moment,” Walensky said. “This guidance is only as good as society’s willingness to follow it.”

Experts criticising the guidance particularly faulted the agency’s failure to require people to have a negative test result before they complete their isolation or quarantine. The agency said best practice would be for people to get a test on day five of quarantine but did not strongly recommend that they do so.

“There are people who are infectious and can transmit after five days,” said Walid Gellad, professor of medicine at the University of Pittsburgh. “It’s probably not the majority, but there are people, so by doing this, you are in effect encouraging people to engage in activities that could increase transmission.”

Walensky said the agency decided not to require a negative test result after people had isolated for five days because the results are often inaccurate at that point in an infection. PCR tests – those typically performed in a lab which are around 98 per cent effective – can show positive results long after a person is no longer infectious because of the presence of viral remnants, she said. It remains unclear how well rapid, at-home tests determine someone’s ability to transmit the virus in the latter part of their infection, she added.

Instead, agency officials determined that wearing a mask after the isolation or quarantine period would help protect against lingering transmissibility, she said.