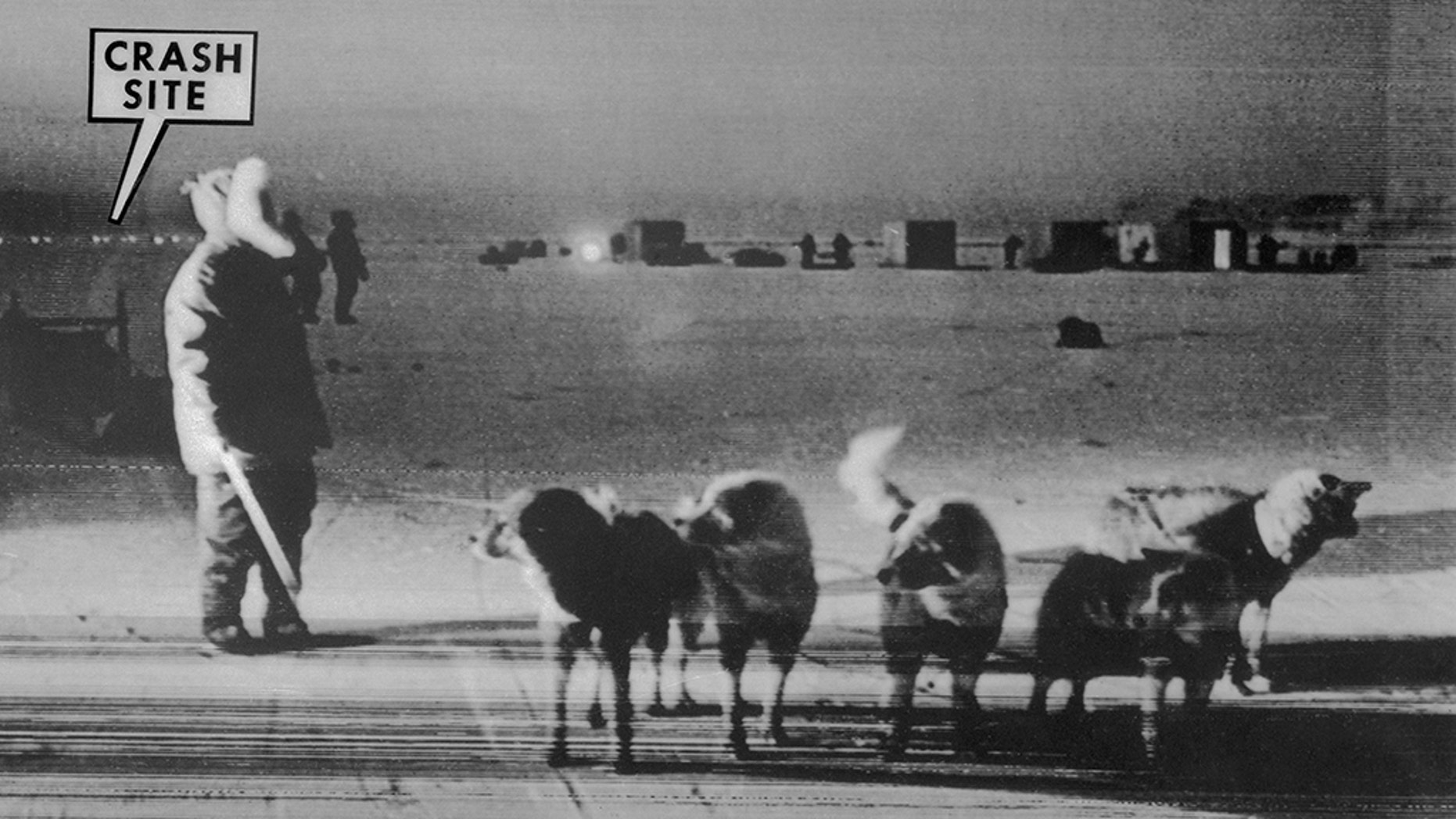 An Eskimo dog team stands on frozen Baffin Bay near the site of the crash of a U.S. B-52 nuclear bomber on January 21, 1968. Buildings on the right are recovery teams. A string of lights at left marks the crash site.
(Getty)

A U.S. military B-52 nuclear bomber crash in Greenland 51 years ago still resonates with three Danish citizens who were involved in the cleanup.

The Air Force B-52 Stratofortress with four hydrogen bombs on board crashed Jan. 21, 1968, 7 miles from Thule Air Base, where the Danes were working for a military contractor from Denmark. They each now have cancer and blame their illnesses on exposure to weapons-grade plutonium scattered by the crash.

Since 2010 the three men have been pursuing benefits through a U.S. government workers' compensation program that covers foreigners who worked at a military base and were injured or disabled on the job.

US B-52 BOMBERS LAND IN QATAR OVER UNSPECIFIED IRAN THREAT

“It is important to emphasize that the workers’ compensation that has been requested is entirely based on our belief that the particular health challenges many of us have been suffering is fair and reasonable because of what we did at the time,” Jeffrey Carswell, one of the Danes, told Fox News by email from his home in Denmark.

Now 76, Carswell has undergone numerous operations since being diagnosed with stomach cancer in 1984. Doctors have removed part of his stomach and esophagus. 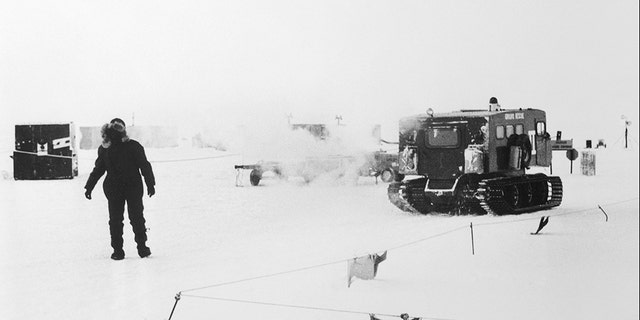 The U.S. Air Force begins cleanup operations at Camp Hunziker after the crash of a B-52 bomber near Thule, Greenland, late in January. The plane was carrying four unarmed hydrogen bombs when it crashed.
(Getty)

Their lawyer, Ian Anderson of New York, told Fox News his clients are entitled to the benefits they are seeking.

“These are not money-grubbers, these are ordinary people,” Anderson said. “Here you have workers who volunteered to work in a dangerous situation, helping to clean up radiation for the benefit of Greenlanders and for the benefit of the American and Danish governments.”

The B-52 disintegrated when it struck the sea ice and the bombs burned but never detonated. The B-52 was in the air when an electrical fire broke out and spread. 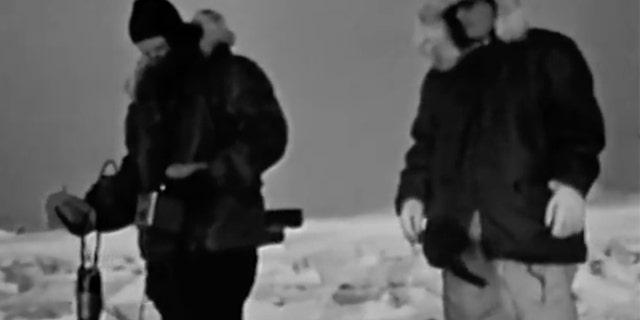 Cleanup crew searches for radioactive debris after the crash of a B-52 nuclear bomber near Thule Air Base in Greenland.
(U.S. Air Force)

The pilot and five crew members ejected and were rescued. Co-pilot Capt. Leonard Svitenko was killed, bailing out through a chute.

Carswell recalled he was in Thule's NCO Club when the plane crashed.

"The massive building shook as if an earthquake had hit," he said. His job the next day was to arrange for Svitenko's body to be repatriated to the U.S.

Hundreds of U.S. military personnel and Danish workers participated in the cleanup, working long shifts in the bitter cold and perpetual darkness to gather aircraft debris and remove contaminated ice and snow. Greenland was a Danish province in 1968. The cleanup lasted nine months.

Carswell said radiation detection devices and protective face masks and suits were never issued to them and their levels of radiation exposure were never known.

Carswell also claimed he was exposed to plutonium when he drank alcoholic beverages at the NCO Club. The ice cubes came from the fjord where the crash occurred.

“The employer kept no records of its workers' exposure and the Danish government refused to allow access to its records, which would have helped our doctors devise appropriate treatment protocols,” he said.

Carswell said it was only 11 years ago that he became aware that what they were exposed to at Thule was "extremely dangerous.” 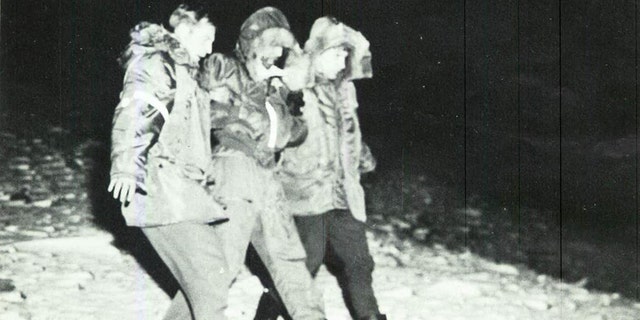 Carswell's fight for compensation for him and other Danish clean-up workers has been a decades-long effort.

In 1988, he joined the Association of Irradiated Thule Workers to lobby the Danish government for compensation, resulting in a $14 million payout to 1,500 people. He also petitioned the European Parliament for access to Denmark’s radiation records.

U.S. military veterans who worked at Thule have also sought compensation for their radiation-related illnesses in a lawsuit against the U.S. government that was thrown out of court after it was filed, Anderson said.

“The military veterans were blocked from suing the U.S. for illnesses by the ‘Freres’ doctrine, barring claims for injuries on ‘active service,’” he said. Court records show the case was dismissed in 1995.

After submitting their workers' compensation claims to the U.S. Labor Department, an administrative law judge was assigned the case. After holding hearings, she denied them benefits, saying they failed to prove their cancers was caused by their exposure to plutonium radiation. 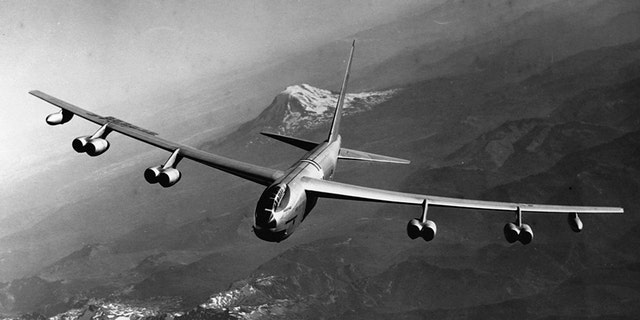 The B-52A Stratofortress was a long-range heavy bomber used extensively by the United States military for a period of a year.
(Getty)

“For me to conclude that the claimants’ health conditions were due to any plutonium radiation exposure at Thule, I would have to discount the opinions of highly-credentialed physicians and ignore a multitude of medical and epidemiological studies,” the judge, Adele Odegard, wrote in 2017 in a 164-page decision that was upheld by the Labor Department’s Benefits Review Board. The board ruled in December.

Anderson has now taken the case to the U.S. 2nd Circuit Court of Appeals.

The defendants in the case were E. Pihl & Sons in Denmark and, over Anderson's objections, the Labor Department's Office of Workers' Compensation Program.

The firm Carswell, Hansen and Eriksen worked for at Thule no longer exists. E. Pihl is a subsidiary that has declared bankruptcy. Those circumstances made the Labor Department liable for any benefits if the decision had gone the other way.

"I think that the medical and scientific evidence against the three claimants is absolutely overwhelming and I don't think the claimants have any path whatsoever to prevail on any issue," Biser said

Carswell said he was not ready to concede.

"Clearly we hope to finally receive the fair treatment that we, for many years, have been waiting for in recognition of having unknowingly put our lives at risk," he told Fox News. "We have been waiting far too long for this and accepting that we are all getting old."