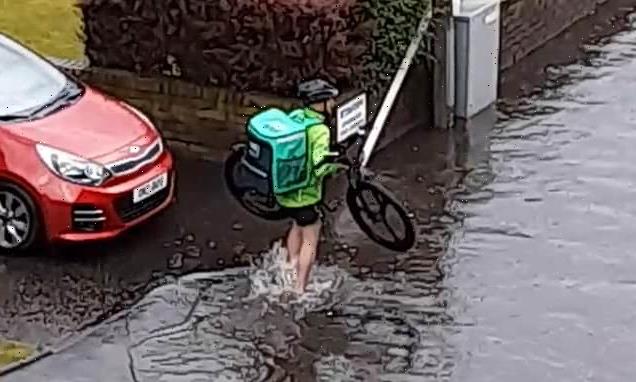 Give him a tip! Moment Uber Eats cyclist takes off his shoes and socks to wade through flooded street and deliver orders in Edinburgh

A dedicated Uber Eats courier has won praise after being filmed taking off his socks and shoes to battle through flash floods and deliver food to customers.

The cyclist was branded ‘brave’ for going to extreme lengths to complete his deliveries while in Gorgie Road, Edinburgh, on Sunday.

Residents said they wanted to bring him inside for a cup of tea and that they hoped he got a healthy tip.

Videos shared online show the determined food courier putting his bike on its stand before taking off his black trainers and white socks to battle the Scottish weather.

It came as multiple streets in Edinburgh, including the famous Princes Street, were flooded during stormy weather as Britons braced themselves for even more rain early this week.

The ballsy cyclist was then filmed eyeing up how to get through the flooded street.

The footage shows a white car driving through the huge puddle before the delivery man walks barefoot through the murky water while holding onto his bike.

The cyclist, wearing a reflective green jacket and black shorts, then picks up his bike and walks right through the water to a pavement. 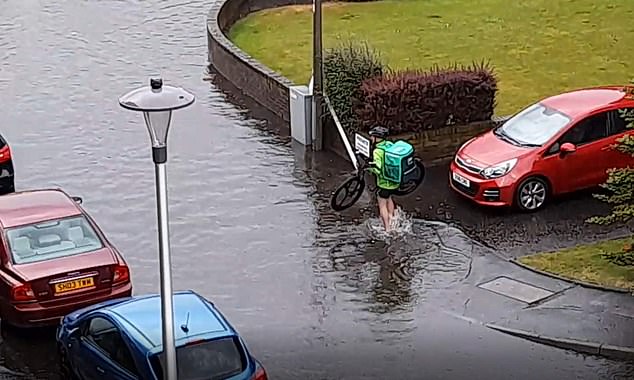 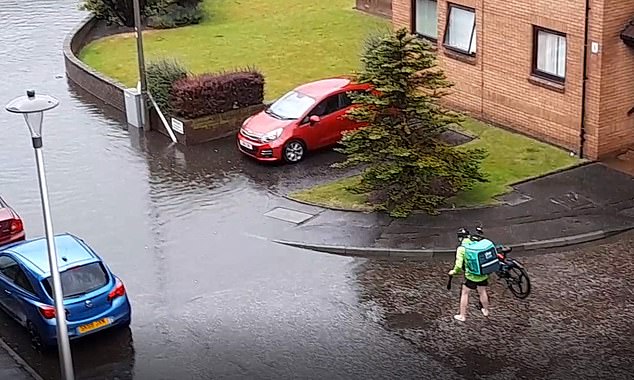 Socks in hand, the Uber Eats courier stares at the huge puddle as he ponders how to cross it

At one point the courier stumbles in the water, apparently tripping in a dip in the road.

He can then be seen looking around after getting to the other side of the huge puddle.

Laura Munro, 31, filmed the incident from her window, and posted it on Facebook on Sunday with the caption: ‘Poor wee guy earlier. Took off his socks and shoes so they didn’t get wet.’ 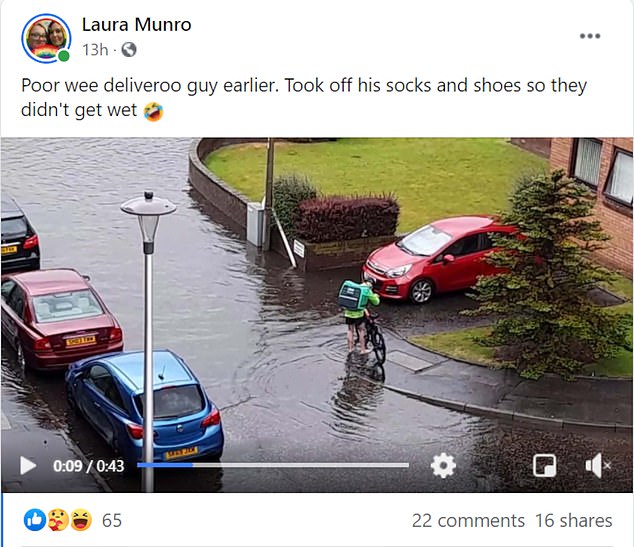 ‘Poor wee guy’: Laura Munro shared footage of the cyclist, who was met with sympathy and praise for his efforts

Several people praised the cyclist for his efforts to get through the giant puddle.

One said: ‘Oh poor guy. Well done for not giving up.’

Another said: ‘He was a brave guy out in that freak rain. P.S. Hope he got a good tip, he deserved one.’

One commented: ‘That was up to his knees! Poor wee lamb. Just want to pour him a hot bath and give him a cuppa.’

Another agreed: ‘I want to bring him in and give him a cup of tea’, while another simply said: ‘Aww bless your cotton socks lad!’ 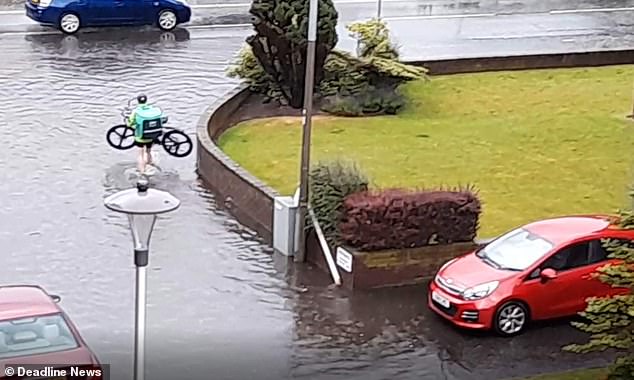 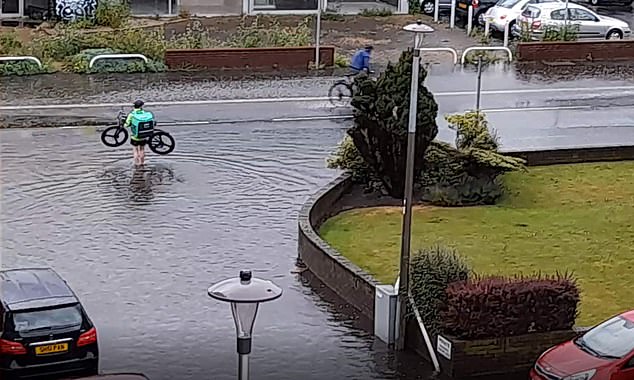 Sunjiv Shah, general manager for Uber Eats UK, said that the company is seeking out the courier to reward him

Speaking today, Laura added: ‘I was looking out the window at the rain and saw a poor guy trying to weigh up how he was going to get out of the street.

‘There were a few times he walked out to look to see a way out that wouldn’t get him too wet.

‘It was hilarious, a very Scottish thing to do. It was too funny not to watch.’

Sunjiv Shah, General Manager for Uber Eats UK, said that the company is seeking out the courier to reward him.

He said: ‘Couriers who use the Uber Eats app are everyday heroes, from being front-line workers throughout the pandemic to braving every type of weather Britain can muster.

‘We’re working hard to identify this courier so we can reward their determination during this action packed delivery.’