The two companies operating Melbourne’s train and tram services pocketed $16 million in taxpayer-funded bonuses for exceeding their performance targets during the pandemic – despite there being almost no passengers.

Between April and December last year, when commuters had largely deserted the train and tram networks, Metro Trains and Yarra Trams received the money on top of the payments the two overseas-owned firms receive to operate the network. 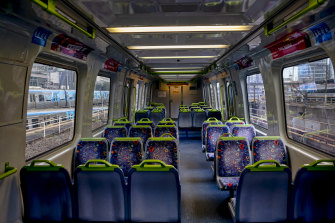 A train last April during what would normally have been the morning peak.Credit:Luis Ascui

The bonuses also came on top of special COVID-relief payments the operators were granted by the Andrews government.

Metro pocketed $12 million in bonuses — more than 80 per cent of all the incentives it earned since the start of 2019, an internal Transport Department breakdown reveals.

The state government paid the operator, based in Hong Kong, $4 million a quarter in bonuses during the pandemic. It is double the $2 million it earned in bonuses for good performance over a 16-month period starting in January 2019.

Yarra Trams received more than $4 million during the period when COVID-19 was causing many commuters to abandon the network. This compared with $821,000 in bonus payments it had earned since the start of 2019. 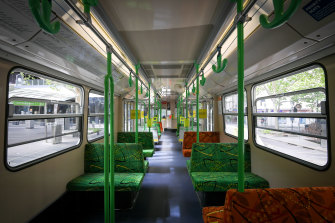 An empty tram travels through the CBD in October.Credit:Eddie Jim

A 91 per cent drop in patronage and 70 per cent slide in road traffic during the extended lockdown last year meant trains and trams ran more smoothly than they had in recent decades.

For the first time since signing lucrative contracts with the government in 2017, Metro and Yarra Trams consistently met or exceeded their monthly punctuality and reliability targets, while commuters faced protracted lockdowns in Melbourne.

Under the terms of their state government contracts, which did not go out to tender, this qualified the operators for bonus payments.

“When the contracts were written at the direction of [Premier] Daniel Andrews in 2017, he clearly never envisaged giving bonuses to firms when there was no one on the trains,” opposition public transport spokesman David Davis said.

A government spokeswoman said transport operators had worked around the clock to deliver essential services to Victorians during the pandemic. And along with bonuses, the operators were charged penalties for failures in passenger experience. Metro paid $414,000 in penalties and Yarra Trams paid $270,000 because of failures to meet standards set out in their contracts.

The spokeswoman said the government had provided Metro Trains and Yarra Trams with support packages last June “to ensure they could remain viable and deliver journeys for essential workers while Victorians stayed at home to slow the spread of coronavirus”.

She said the COVID-19 relief payments took into account bonuses that were due to be paid to the operators.

Melbourne University urban planning professor Crystal Legacy said the bonuses highlighted the risks of privatising public infrastructure: the deals “don’t always reflect what is in the best interests of users and the state generally. The incentives put in place are perverse, because doing their job well under the agreement is to do so under conditions where people are actually taking public transport.”

The Age can confirm Metro was paid $65 million in relief money between April and December last year, while Yarra Trams was paid $36 million, according to Transport Department figures.

The COVID-19 relief package agreements — drawn up by law firm Allens and kept secret when the deals were struck in the middle of last year, but partially released under freedom-of-information laws — reveal Metro signed up to strict conditions in return for government relief money.

No employee at the operator was allowed to have their working hours altered and Metro was required to keep the deal confidential unless otherwise directed by the government.

Both operators are required to repay a portion of the support package to the government over the remaining years of the franchise term, with repayments to be funded by future net profits.

A Metro spokesman said the operator’s revenue had dropped as a large number of passengers stayed home to slow the spread of the coronavirus. The fall had been far greater than the total of all performance bonuses earned in 2020.

A Yarra Trams spokeswoman said the operator received COVID-19 relief payments in the wake of significant loss in ticket revenue.

Public Transport Users Association spokesman Tony Morton said it was reasonable for the government to compensate operators for retaining workers’ jobs and for running a full service during the pandemic despite the drop in patronage.

But paying the private companies bonuses for performance only made possible by lockdown conditions amounted to “windfall benefits” and was “a bit rich”.

Rail, Tram and Bus Union Victorian secretary Luba Grigorovitch said the bonuses were particularly insulting when there were vacancies at key railway stations across the city that Metro was not filling.

Melbourne’s train and tram operators have operated in Victoria under a performance scheme that links incentive and penalty payments to performance since the network was privatised in 1999.