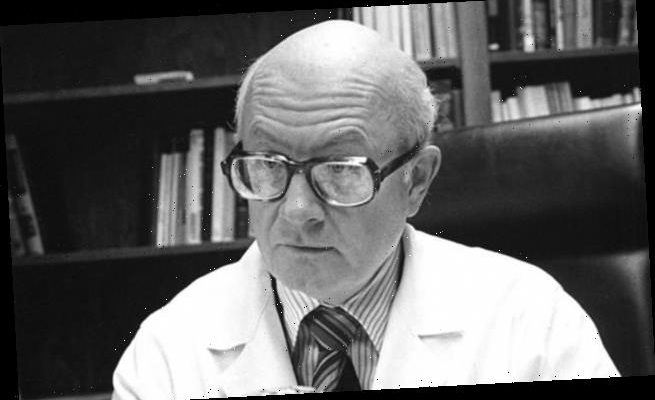 Can doctors transplant a human soul? That was the question that led the ‘real-life Dr Frankenstein’ to perform barbaric experiments by swapping animals’ heads, writes TOM LEONARD

After 18 hours of surgery, there was silence in the blood-drenched theatre as two exhausted medical teams waited for the patient, a male macaque monkey, to wake up. Finally, first one eye and then the other fluttered open.

Surgeon Robert White gently tapped the animal’s nose with some forceps and it tried to bite him. The room erupted in cheers and some even danced for joy.

As the macaque’s vocal box nerves were severed and it was paralysed from the neck down, it couldn’t do much more than chew a pencil and bare its teeth at them in terror and agony.

This was understandable: hours earlier it had been perfectly healthy and mobile — but now it had only eight days to live before its new body’s immune system rejected its head. 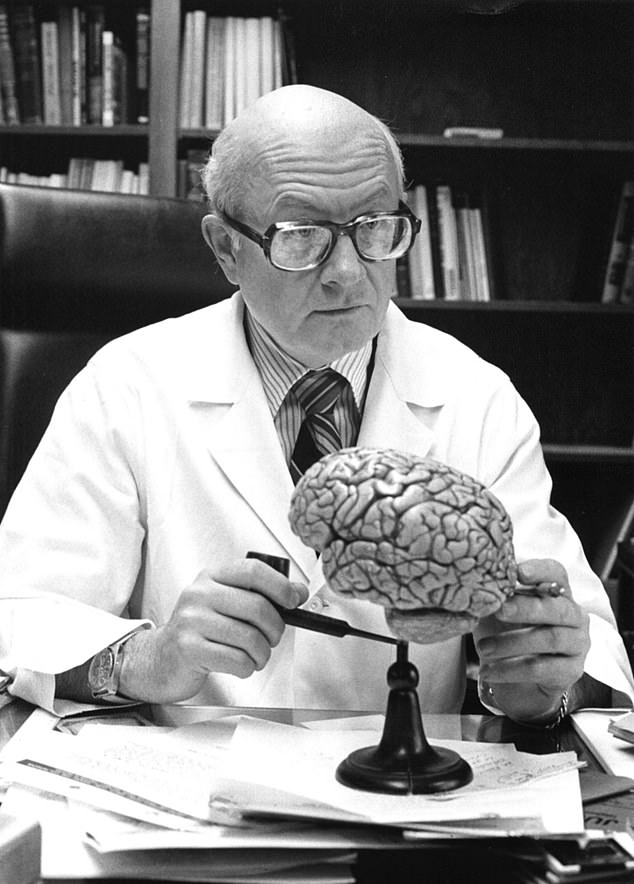 After 18 hours of surgery, there was silence in the blood-drenched theatre as two exhausted medical teams waited for the patient, a male macaque monkey, to wake up. Finally, first one eye and then the other fluttered open. Surgeon Robert White (pictured) gently tapped the animal’s nose with some forceps and it tried to bite him

But on that day in March 1970, White, an Ohio brain surgeon, and his team had achieved their aim: to perform the world’s first successful primate head transplant, removing the head of a living macaque and attaching it to the neck of the decapitated but still living body of another.

Furious animal rights activists called him ‘Dr Butcher’, claiming his experiments ‘epitomised the crude, cruel vivisection industry’. Yet White insisted his grisly laboratory work might offer hope to people whose bodies were completely failing but who retained their mental faculties.

The question of whether his head-swap surgery on monkeys could — and should — ever be done on human beings absorbed Dr White, a devout Catholic and friend of two Popes, for much of his life.

Now the story of the man dubbed ‘the real Dr Frankenstein’ has been told in a new book, Mr Humble And Dr Butcher, by Brandy Schillace.

It explores not only White’s gruesome experiments but the conundrum of how a man nominated for a Nobel Prize for developing lifesaving surgical procedures also appalled bioethicists and animal-lovers, who accused him of causing unnecessary suffering to countless animals, including hundreds of monkeys, in a perverse attempt to ‘play God’.

White, a brilliant scientist who was talent-spotted by Harvard Medical School, liked to call himself ‘Humble Bob’. But there was nothing modest in his ambitions, or his cold insistence that his research justified the painful deaths of thousands of animals during decades of bloody ‘experiments’.

Although he would be acclaimed for inventing brain-cooling procedures that are still used today to save heart-attack patients, he was far more fixated on eccentric quasi-religious theories about where people’s ‘souls’ resided.

‘The brain has become the centre of the human anatomical universe,’ said White, who died aged 84 in 2010. ‘When it’s with us, you’re alive and when it’s not, you’re not.’

Consequently, he preferred to call his procedures not ‘head transplants’ but ‘full body transplants’. The head — that is, the brain — was what mattered; the donor body was just a receptacle.

A body transplant, therefore, was not merely a scientific milestone but a spiritual one because the soul, too, was being moved to a new body.

After watching his mentor Joseph Murray perform the first successful kidney transplant in 1954, White questioned the point of transplanting organs such as kidneys and hearts piecemeal when you could do all internal organs at once by transplanting the head.

However, the Soviets — and in particular another brilliant scientist, Vladimir Demikhov, who appallingly transplanted two heads onto a dog — had the same idea and another Cold War race developed as the two scientists tried to beat each other. During the 1950s and 1960s, White did brain-removal surgery on mice, rabbits and dogs before moving on to monkeys in the 1970s. 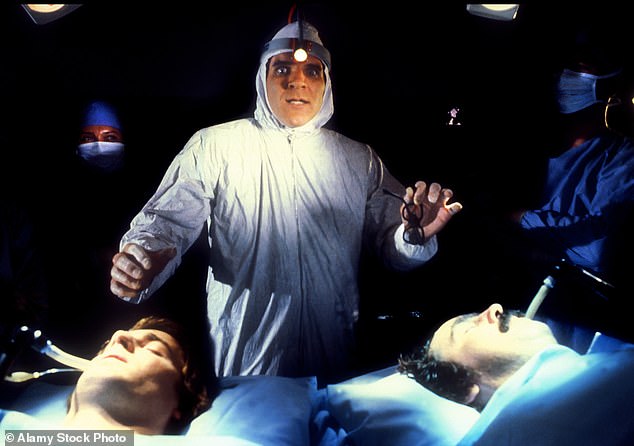 Pictured: A still from The Man with Two Brains

He saw nothing unethical about his research. He attended Mass every day and advised his friends Pope Paul VI and Pope John Paul II on bioethics. ‘The guidance behind my hand when I operate is God’s,’ he modestly claimed.

White — who met his wife Patricia, a nurse, during surgery and fathered ten children with her — believed that a head transplant could literally save a human soul.

Holding a brain in his hand, he once said: ‘It was perfume but now it’s an empty bottle. But the fragrance is still there.’

Once, when a priest visited White’s Cleveland operating room in the 1960s, he found the brain surgeon eating a sandwich over a dog whose blood he had drained and whose brain he had cooled to 10c. White asked the priest if he thought the dog was dead; the priest replied that it clearly was.

White then recirculated blood through the dog’s brain, warming it, whereupon the animal groggily recovered and began lurching about. ‘Maybe like Christ,’ said White, winking. ‘Dead and revived.’

He had a tendency to flippancy — striding around at Halloween, for instance, with a doctor’s bag inscribed ‘Dr Frankenstein’ — that only further infuriated his critics.

In Mary Shelley’s book, Dr Frankenstein makes his monster from the bodies of the dead. White, instead, worked on the living. He performed five ‘successful’ head transplants on monkeys and in each case the revived creatures showed an instant dislike for him — confirming, he believed, that they remembered him.

White envisaged that the operation he did on monkeys would also work with humans. The donor and recipient, lying next to each other, would be anaesthetised and incisions made around their necks.

Two medical teams would carefully separate tissue and muscle to reach the carotid arteries, jugular veins and spine. Bones would be removed so the spines could be severed and both heads removed. The recipient’s brain would be kept functioning by pumping blood through it.

The body donor’s head would be disposed of, as would the recipient’s body. On the ‘new’ body, the arteries and veins would be sewn up and the skin stitched together.

Pumps would lower the body temperature to slow metabolic rate, and drugs that suppress the immune response could prevent the body rejecting its new head (a problem which had ensured none of the animals he experimented on survived for long).

One major drawback was that to remove a head, the spinal cord needed to be severed. Reconnecting it to the body of another animal proved impossible without paralysing the ‘new’ animal.

White was undaunted, arguing that, performed on humans, it would offer an alternative to death for people with multiple organ failure. If only the public could get over their disgust at the idea of removing heads, he complained.

There was another question his experiments never resolved. While transplanted monkey and dog brains could still respond to stimuli, that didn’t necessarily mean a human’s consciousness would be preserved.

White, who also considered removing brains and keeping them alive in jars, provoked shock and revulsion in equal measure, inspiring a character in the sci-fi TV series The X Files and identifying at least two quadriplegic celebrities — physicist Stephen Hawking and Superman actor Christopher Reeve — as possible candidates.Instead, by the late 1990s he had found only two potential patients — an Ohio man in his 40s with quadriplegia and whose organs were failing, and a brain-dead man to serve as his ‘body donor’.

No hospital gave its approval and White’s fantasy operation never took place. However, his work survives him. In 2019, U.S. scientists discovered how to revivify dead pig brains in the lab. Italian and Chinese scientists continue to research head transplants.

Jerry Silver, a colleague of White’s, recalled White’s first successful monkey head transplant as ‘barbaric’. He said: ‘I remember that when the head would wake up, the facial expressions looked like terrible pain and confusion and anxiety.’