US President Joe Biden has launched an ambitious bid to reform voting rights in America, calling for a controversial shift to Senate rules in the hope of safeguarding future elections.

But in a damning blow for the Democratic leader, some advocates boycotted the President’s speech out of frustration over his slow progress so far. And the party’s most high-profile voting rights activist, Georgia governor candidate Stacey Abrams, did not attend the event either, citing a scheduling clash.

Days after accusing his predecessor Donald Trump of inciting the 2021 Capitol attack through a “web of lies”, Biden warned that the nation faces its biggest test of democracy since the Civil War and urged Congress to finally act. 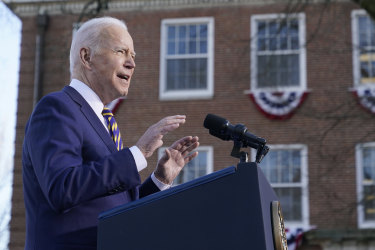 “The next few days, when these bills come to a vote, will mark a turning point in this nation,” he said.

“Will we choose democracy over autocracy, light over shadow, justice over injustice? I know where I stand… The question is where will the institution of United States Senate stand?”

Biden’s speech was designed to reignite a Democrat-led effort to pass new protections at a time when several state-based legislatures are enacting laws that critics fear will disenfranchise millions of Americans at the polls – a claim Republicans deny.

The reforms centre around two bills that have stalled in Congress: the John Lewis Voting Rights (Advancement) Act, which would restore and update the full protections of the landmark Voting Rights Act of 1965; and the Freedom to Vote Act, which, among other things, would expand opportunities to vote through early or mail-in ballots, allow voters to sue over attempts to set aside valid election outcomes, and make election day a public holiday. 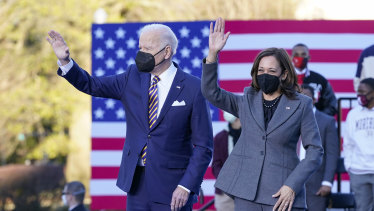 However, in a worrying sign for Democrats ahead of this year’s midterm elections, a coalition of voting rights activists snubbed today’s presidential visit, with some saying that Biden and vice-president Kamala Harris should not to bother coming to Georgia unless they had a clear plan to advance the issue.

“We need action, and that action is in the form of the John Lewis Voting Rights (Advancement) Act as well as the Freedom to Vote Act, and we need that immediately.” 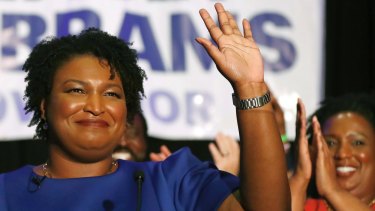 Stacey Abrams has devoted years of work to enfranchising black voters and is widely credited for helping Biden secure victory in Georgia in 2020.Credit:AP

Trump also used Abrams noticeable absence to hit out at the President, releasing a statement claiming she “helped Biden steal the 2020 Election in Georgia but now she won’t even share a stage with Joe.”

The difficulty Biden faces in passing voting reform is that current Senate rules requires a “super majority” of 60 votes to advance most legislation — a threshold that Democrats can’t meet because they only have 50 votes in the chamber, the same as Republicans.

That means in order to get its voting reforms through Congress, the Democrats would need to change the Senate’s so-called “filibuster” rule or Republicans could delay the bill for weeks on end.

But changing the filibuster would in itself require the support of all 50 Democrats, which appears unlikely given at least two centrists Democrats, Joe Manchin and Kyrsten Sinema, have already indicated they would be unlikely to endorse it.

Biden nonetheless made an impassioned plea on Tuesday, throwing his weight behind a limited “carve out” of the Senate rules, rather than a permanent change, to advance voting rights.

“I’ve been having these quiet conversations with members of Congress for the last two months. I’m tired of being quiet,” he said in his speech.

“Today I’m making it clear that to protect our democracy, I support changing the Senate rules, whichever way they ought to be changed… Let’s go get this done.”

Figures from the progressive think tank the Brennan Centre show that 19 Republican-led states have passed 34 laws restricting access to voting. In Georgia, for example, new laws introduced last year curtail ballot access for voters in urban and suburban counties, which is home to a growing number of Democrats and people of colour. Another provision makes it a crime to offer water to voters waiting in lines.

Biden lay much of the blame on Trump, saying in his speech: “The goal of the former president and his allies is to disenfranchise anyone who votes against them. Simple as that.”

“That’s the kind of power you see in totalitarian states – not in democracies. We must be vigilant. The world is watching.”

Meanwhile, back in Washington, Republicans held a news conference on Capitol Hill, hitting out at the Democrats’ attempts to change the filibuster rules.

“I think turning the Senate into a place where the majority can trample on the minority is a terrible outcome,” said Texas senator Ted Cruz, an aspiring GOP leader.

“The Republicans had the White House, the Senate, the House – we had every ability to do exactly what (Democrat Senate Leader) Chuck Schumer wants to do right now, and the Republican Party didn’t. This is a power grab to enable a power grab… It’s a takeover of elections.”

Biden’s plan also found an unexpected critic in Georgia’s Republican state secretary Brad Raffensperger, who has been repeatedly praised by Democrats for withstanding Trump’s pressure to “find” the former president enough votes to win the state at the last election.

Speaking at a separate press conference on Tuesday, Raffensperger accused the Democrats of attempting “to weaken election security under the guise of voting rights” and laid out a plan he argued would be more effective at securing elections at the federal level.

This would include national voter identification laws, a “nationwide ban on ballot harvesting” and reforms to election auditing.