Britain’s warm spell has been brought to an end with temperatures set to fall this weekend amid rain and ‘the odd thunderstorm’.

Scotland has seen sunshine and toasty highs of 77F this week – and the country enjoyed temperatures hotter than Hollywood as revellers flocked to beaches in the lead-up to summer.

Today the UK will see warm sunshine in the north and west of the country, with England and Wales cooler, cloudier and subject to spells of patchy rain.

Western Scotland and the north of England could see temperatures hit a peak of 72F, and it will be closer to 63F in the southern parts of the country.

But the Met Office’s Richard Miles told MailOnline the weather will be dropping in the northern half of the UK from tonight onwards – with scattered showers and the possibility of thunderstorms.

He said: ‘It’s going to be cooler, especially in Scotland, everywhere else will be cloudier and a bit more unsettled – less sun is the main story but there will still be some sunny spells in the south getting warm.

‘You might see a scattered shower anywhere – but it won’t be widespread.

‘In the north of the UK rain will be coming in tonight and moving westwards.’ 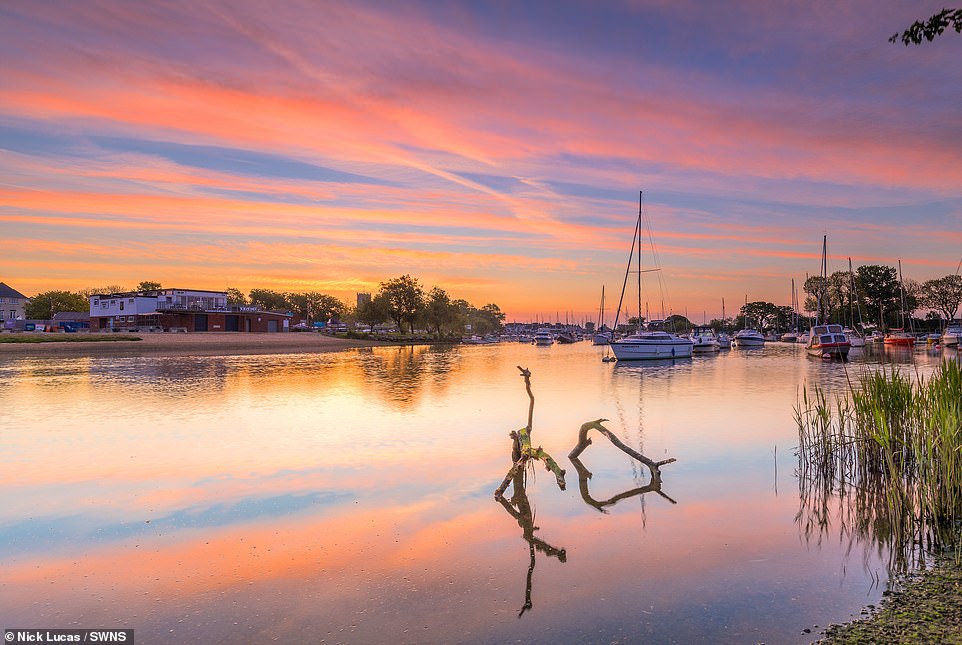 Today the UK will see early sunshine in the north and west of the country, with England and Wales cooler, cloudier and subject to spells of patchy rain (pictured: A sunrise at Christchurch Quay, Dorset, May 16)

On Saturday Scotland is set for a chill, with temperatures of 54F in Aberdeen, 55F in Glasgow and 52 in Edinburgh.

We will likely see a relatively warm 68F in the London and Southampton areas but more temperatures will be closer to 61F for most of the southern half of the UK.

Mr Miles said: ‘There is a possibility of the odd thunderstorm but I don’t think we’re seeing a lot of thunder clouds forming outside northern England and Scotland and maybe south of Northern Ireland on Saturday.

‘You might see the odd storm break out but nothing widespread.’

The wet weather will be ‘heavy and persistent’, especially over eastern Scotland, he added.

‘The coldest and cloudiest weather will, in a dramatic change, be in Scotland,’ he continued. ‘Elsewhere, generally, in the southern half of UK it will be a relatively pleasant weekend but you might see it getting a lot colder in the northern half of the UK from tonight onwards.’

‘The south of the UK on Saturday and Sunday we’re looking at more cloud than there has been of late but staying relatively warm and the odd shower could break out anywhere Saturday or Sunday, but generally a relatively fine day for most.’

Mr Miles said there is likely to be ‘kind of a north-south split’, with the south this time being warmer and dryer with more sunny spells, and the north enduring colder, wetter weather.