An Australian aid worker has received desperate calls for help from his former Afghan colleagues who say they expect to be hunted down door-to-door by Taliban forces or tracked via social media after the fall of Kabul.

Geoff Peterson, who worked for an AusAID-funded Department of Foreign Affairs and Trade (DFAT) program in Afghanistan from 2010 to 2012, said Australia had a responsibility to evacuate Afghans who had assisted the program. 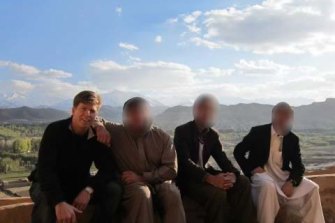 Geoff Peterson with some of his colleagues during his time working as an aid worker in Afghanistan. Faces have been blurred for safety reasons.

“My friends and colleagues are saying, ‘our lives are [under] threat, they’re going to hunt us down, they have a list, they know who we worked with’,” he said.

“I’m not saying Australia needs to take responsibility for all of Afghanistan, but it needs to lend a hand to those who lent a hand to us while we were there. It’s a betrayal if we fail to act.”

Australia is on standby to send RAAF aircraft to Kabul to rescue almost 600 Australians and Afghans. This number includes up 200 Australian citizens and their family members.

Prime Minister Scott Morrison conceded on Tuesday that Australia would not be able to help all Afghans who worked with and supported Australian troops.

Mr Peterson said the rescue operation must include the thousands of Afghans who had worked for Australian aid programs.

He had been contacted by seven Afghans as of Tuesday. Most of the messages were simple requests for help, but some provided more detail on the unfolding humanitarian crisis.

“It’s calm so far but when the dust [settles], there will be [a] door-to-door search,” one Afghan wrote to him. “[Intelligence] agencies are quite active and hunting down people. Oppression is expected.”

The Afghan man wrote that he feared being tracked down on social media. Mr Peterson said Facebook made it easier for the Taliban to find Afghans who had worked for foreign governments. He said he had made his friends list on the app private to protect his colleagues’ safety. 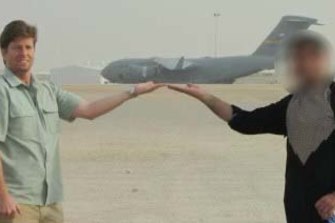 Geoff Peterson with one of his Afghan colleagues.

In one voicemail, Mr Peterson could hear gunfire in the background.

The $13.2 million DFAT program, called Development Assistance Facility for Afghanistan, had a mission to improve the Afghan ministries of agriculture, health, education and rural rehabilitation and development.

Mr Peterson worked within the education ministry in Kabul, including helping to improve education for girls. He lived part of the time in a house in Uruzgan province, where there was a heavy Taliban presence.

He said the program opted to keep a low profile within the community rather than operate out of a large military base or in green zones, with maximum security, to foster good relationships with civilians and reduce danger.

However, this meant his Afghan colleagues, bureaucrats, translators, drivers, cooks and security, risked being seen with Australian staff and targeted for working for the program.

Mr Peterson said they regularly came under attack, including being shot at, and that was he was just metres away from three separate bombings.

“I have no doubt I was saved by my Afghan friends. I’m alive because of them,” he said through tears.

“We always have to depend on locals we work with. They put themselves in danger.

Mr Peterson said a betrayal would threaten future aid missions as trust in the Australian government would be broken.

Refugee Council of Australia president Phil Glendenning said while military interpreters had been most prominent, he was also concerned for the hundreds Afghans who worked with the Australian government through aid, development and security work.

He said reports out of Kabul suggested that some Afghans had begun providing information to the Taliban about individuals’ links to foreign governments so that they could keep themselves safe.

“I hope we haven’t left it too late. If we have, that would be on the head of this government forever.”