Sandra Bullock and Channing Tatum are in for a wild ride. On Thursday, Paramount Pictures released the first trailer for the duo's upcoming adventure flick, The Lost City.

Bullock stars in the film as Loretta Sage, a reclusive romance-adventure author who's spent her career writing about exotic places. Tatum is the novels' cover model, Alan, who strives to embody the book's hero character, Dash, in real life.

While the pair is promoting Loretta's latest book, she's kidnapped by an eccentric billionaire (Daniel Radcliffe) who wants to find the treasure featured in her newest novel. Alan sets out to rescue the author, as they're both thrown into an epic jungle adventure. 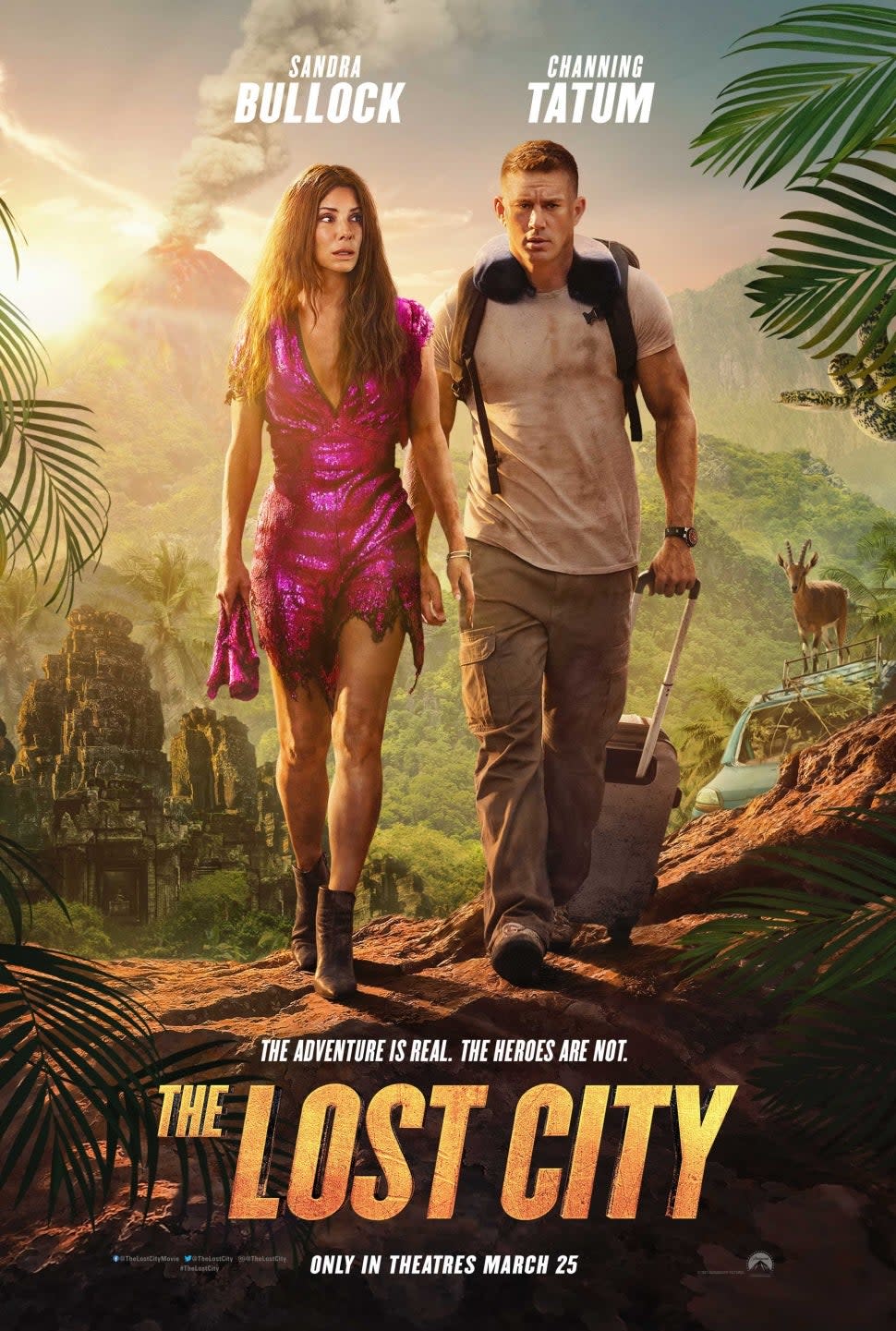 The trailer teases all the major plot points in the film, from when Loretta's time sipping chardonnay in the bathtub turns into a story right out of one of her books.

"I'm here to save you," Alan declares when he shows up on a mission to rescue Lorette. "I'm certified CPR, certified CrossFit, I have snacks."

Her best chance at rescue, though, may come from Brad Pitt, who makes a cameo in the flick.

"Why are you so handsome?" Loretta asks Pitt's character in the trailer. "My dad was a weatherman," he responds with a knowing smile.

The trailer comes one day after the studio released first-look pics from the film. In one shot, Bullock, wearing a sparkly purple look, stands next to a more casually dressed Tatum in front of a waterfall. Another pic features the duo quickly running away from a burning car alongside Pitt. The third and final photo shows Radcliffe standing on a boat, with Bullock and Tatum behind him. 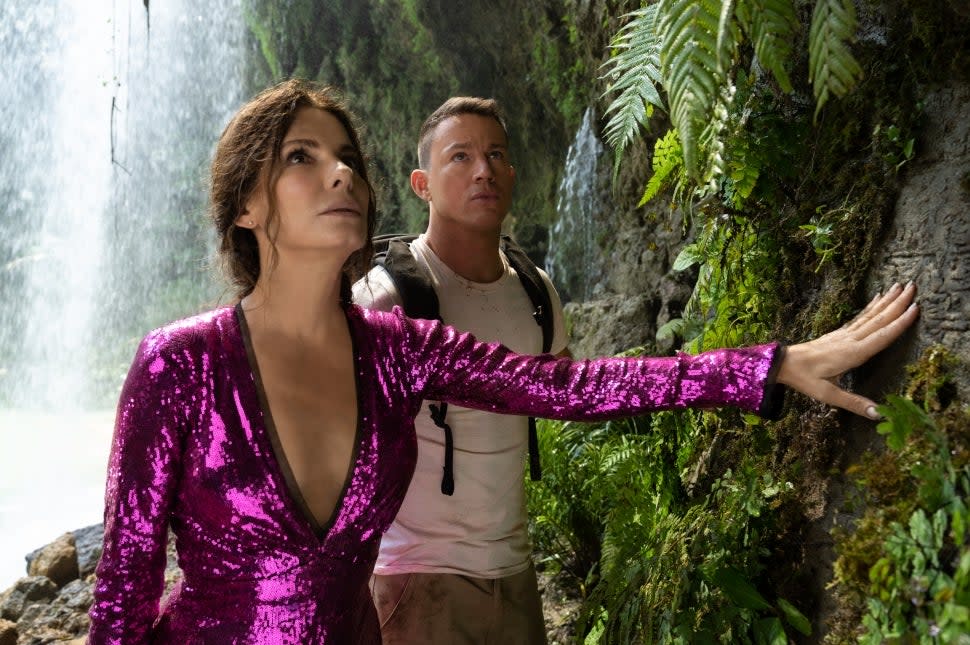 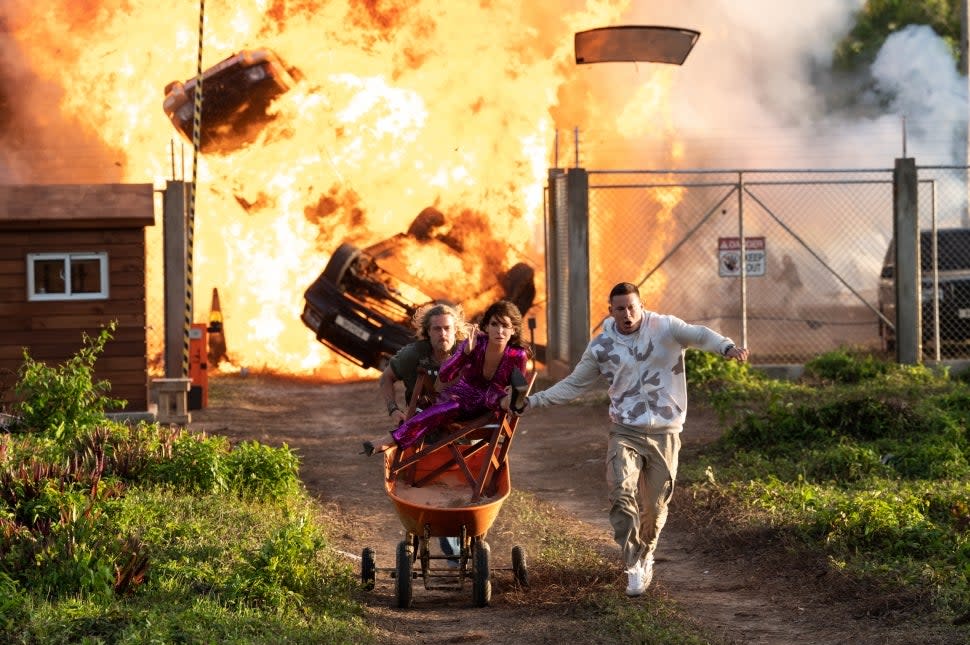 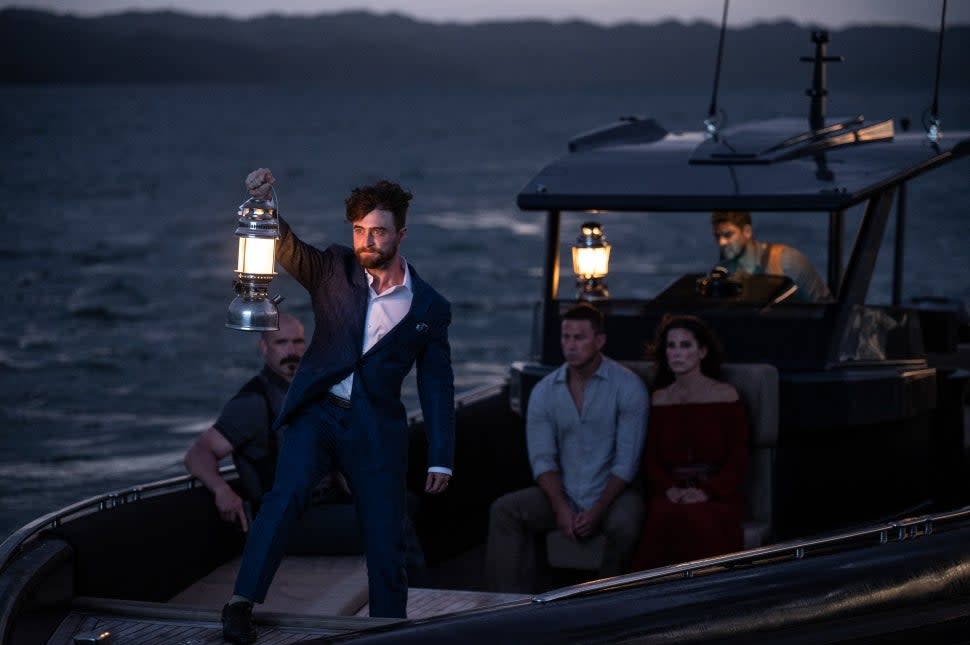 While fans can certainly get excited to see Bullock and Tatum share the screen in The Lost City, they shouldn't expect to see the actress in her co-star's next project, Magic Mike's Last Dance. The upcoming HBO Max film is the third installment in the Magic Mike franchise, in which Tatum stars as a stripper.

"He's doing a lot of asking for me to come on board with my skills in the stripping world, which they're world renowned," Bullock joked to ET's Kevin Frazier at the premiere of her other movie, The Unforgivable. "I don't know if I wanna do it and take the attention away. Channing needs that moment, and if I step on stage, you know what's gonna happen. It's like, all eyes are gonna be on this. It's all gonna be on mama."

"Not really, but in my world, that's what would happen," she continued. "All eyes would just shift off of Channing and onto me, and they would stay."

The Lost City is due out March 25.

Channing Tatum Picks Up Sandra Bullock and Jumps Into a Pool