A small skull found inside a piece of 99 million-year-old amber had scientists thinking in 2020 that they discovered the smallest dinosaur to date. However, new research has concluded the fossil belongs to a strange-looking lizard.

In early 2020, the Oculudentavis khaungraae was presented as a flying dinosaur given its round, birdlike skull. The creature, roughly the size of a hummingbird, was found in Myanmar and believed to have been around about 100 million years ago.

However some researchers weren’t sure if it was actually a dinosaur or a bird, and the research that initially claimed it to be a dinosaur was redacted. Another group of researchers examined a similar fossil found in the area, and their findings published on Monday determined it belonged toa never-before-seen lizard.

“The specimen puzzled everyone involved at first, because if it was a lizard, it was a highly unusual one,” said lead researcher Arnau Bolet from the Institut Català de Paleontologia Miquel Crusafont in Barcelona, Spain.

Twice the size of the Hollywood sign: One of the largest dinosaur species in the world discovered in Australia

Once thought to be a bird, the Oculudentavis naga turned out to be a small, unique lizard. (Photo: Scientific illustration by Stephanie Abramowicz.)

A CT scan was used to analyze the two species, and although similar, they weren’t exactly the same. However, both had characteristics that are common in lizards, like the fusion of teeth to the jaw rather than nestled into sockets like most dinosaurs.

“We concluded that both specimens were similar enough to belong to the same genus, Oculudentavis, but a number of differences suggest that they represent separate species,” Bolet said. 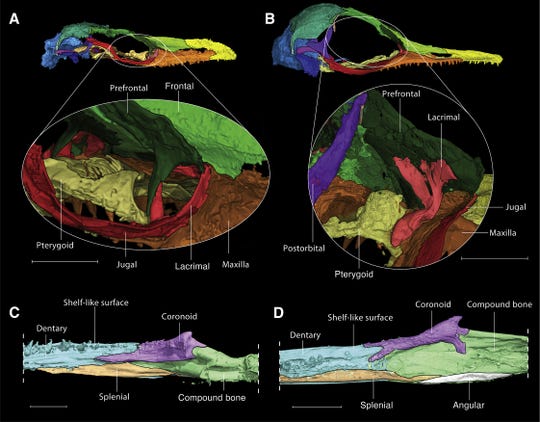 The differences in specimens led the team from the most recent study to name the creature Oculudentavis naga, in honor of the Naga people in Myanmar where the artifact was found.

While this Oculudentavis species resembles a lizard, researchers note it doesn’t look like anything seen in the present world.

“It’s a really weird animal. It’s unlike any other lizard we have today,” herpetologist Juan Diego Daza from Sam Houston State University said in Florida Museum.

Daza also gave credit to the workers who “who risk their lives to recover these amazing amber fossils.” Acquiring Burmese amber, the type of amber where this particular fossil was found, has become difficult in Myanmar after the country’s mines became military-controlled in 2017.