A PREGNANT mum has reportedly been shot dead in front of her kids and husband in a vile door-to-door execution by the Taliban.

Banu Negar was brutally killed yesterday night at her home in Ghor, Afghanistan, in the latest incident of violence committed by the jihadi regime. 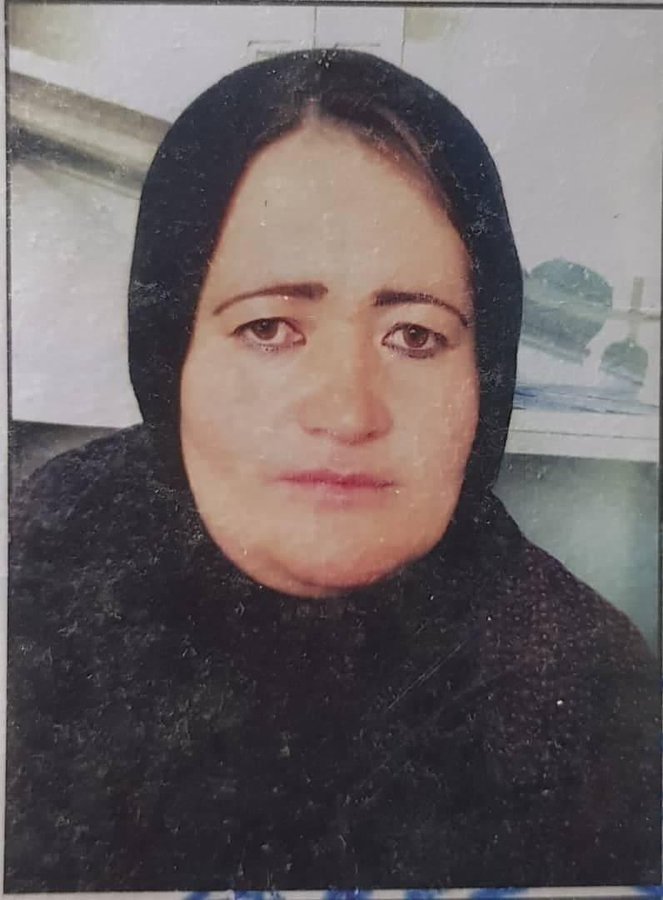 Local news outlets, leading Afghan journalist Bilal Sarwary and the BBC have reported her apparent execution at the hands of the Taliban.

Banu, a former police officer, was reportedly six months pregnant and also had an infant son.

Pictures being circulated on social media appear to her body lying on a blood stained carpet.

Her face appears to have been disfigured in the picture.

And one chilling picture shows a pair of blood stained screwdrivers sitting on a carpet – but it is unclear how these are connected to her death.

Other images show blood smeared over the green walls of her home and her body wrapped up in a sheet.

Taliban forces have reportedly been going down door-to-door hunting for former members of the Afghan security forces or allies of the West.

Etilaatroz reported that Banu had been working at the provincial prison before the fall of Afghanistan.

Two locals are said to have confirmed her death which happened between 8pm and 10pm on SAturday.

The outlet also reports Taliban spokesman Zabihullah Mujahid's secretary, Bilal Karimi, did not confirm the incident but was "receiving information".

He reiterated the militant group's claim that they have pardoned all those who worked for the former administration.

However, there have been numerous reports of "death squads" hunting for their enemies of the Taliban.

It is has been claimed many of those who worked for the government are now in hiding or have attempted to flee Afghanistan.

The Taliban carried out brutal crackdowns and executions when they ruled the country in the late 90s before being defeated by the West in 2001.

And as they surged back to power 20 years on, it is expected many of those in the militant group are seeking vengeance.

Afghans who aided Western forces – such as interpreters and security officials – are believed to be particularly and risk.

Women also fear for the future under the new rule after the brutal, oppressive and sexist laws enacted by the group in the 90s.

WITH stonings, beheadings and being shot with assault rifles at point blank range, the women of Afghanistan face being left to a horrific fate.

Women were brutally oppressed when then the militant group last controlled Afghanistan in the 90s – and this looks set to return.

Pictures from Kabul already show pictures of women being painted over, and many high profile females have already been withdrawn from public life.

Many women opted to flee the country – and those that remain have spoken of how they have been left in fear for their lives.

During the group's five year rule throughout the 90s women were left housebound, only being able to leave with a male chaperone and while wearing a full burqa.

"The face of a woman is a source of corruption", according to the Taliban.

Women are banned from working, banned from education over the age of 8, restricted from seeing doctors and face the constant threat of flogging or execution for any breaches of "moral" laws.

Already there have been reports of girls as young as 12 being married off to fighters, a woman being shot for wearing "tight clothes", and women being told they cannot leave home without a male chaperone.

Taliban militants in 2016 beheaded a woman for going shopping alone while her husband was away from home in the village of Larri.

Footage from 2012 captured Taliban militants shooting a woman named Najiba, 23, in the back of the head as she sat in a ditch in Qol.

While another horrific video showed another woman named Rokhshana, 19, being stoned in a shallow grave in Ghor in 2015.

Video captured earlier this year showed an unnamed woman screaming as she was whipped by a Taliban fighter accused of talking to a man on the phone.

And in one of the most infamous pictures ever captured of Taliban brutality, a woman named Zarmina, a mum-of-five, was executed in the middle of a football stadium in Kabul in 1999.

Zarmina's death was watched by 30,000 spectators as she cowered beneath her veil – showing the terrifying normalisation of violence against women under the Taliban.

And meanwhile, Bibi Aisha had her nose and ears cut off by the Taliban when she tried to flee after being married off at 14.

And so in this regard, a female former police officer may have been particularly at risk from the Taliban.

Women already face being whitewashed from public life – with shop fronts featuring female faces being painted over and female newscasters being replaced on TV.

Some are rising up – with a women's rights protest in Kabul yesterday being brutally broken up by Taliban special forces using tear gas.

The Taliban are feared to be poised to resurrect their horrific interpretation of Sharia law – which involves women being murdered for showing too much flesh, demanding basic human rights, having affairs and being rape victims.

Widespread reports of oppression and abuse have emerged as they surged back to power over the last few weeks.

The brutes have already reportedly burnt to death a woman they said served below-par cooking to its members.

Taliban squads have been going door to door in Afghanistan kidnapping children as young as 12 to use as child brides and sex slaves since they swept back to power in Afghanistan. 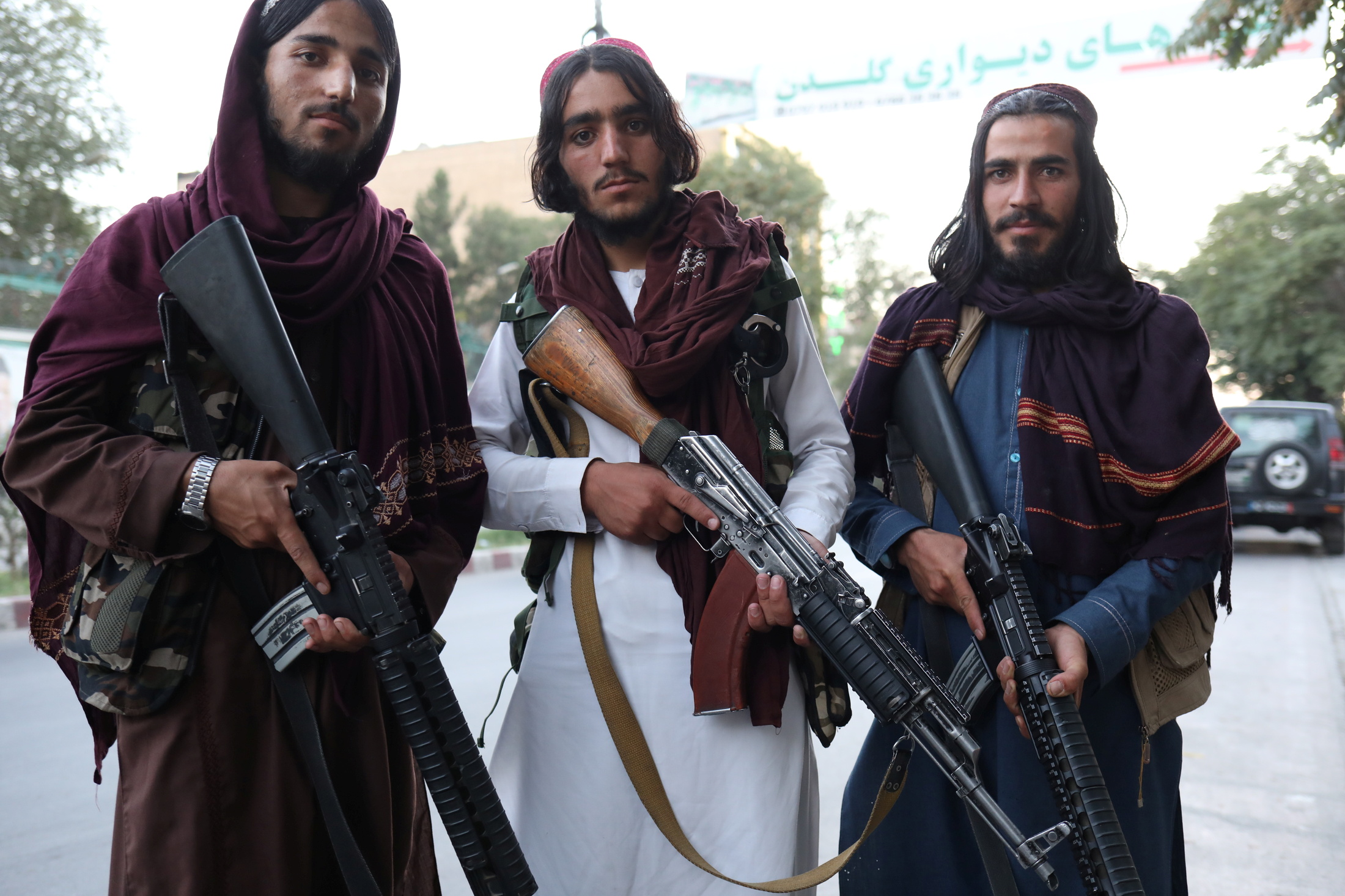 British, American and other allied forces defeated the Taliban in 2001 after they allegedly harboured al-Qaeda terrorists who plotted the World Trade Centre attacks on 9/11.

Western nations have spent 20 years trying to rebuild Afghanistan as a new democratic government was installed and brutal laws enacted by the Taliban were ended.

However, the occupation was under constant attack from terrorist forces – and US President Joe Biden had declared his desire to end so-called "forever wars".

Some 20 years of work was undone in a matter of weeks as the Taliban surged back to power – sometimes unopposed – and recaptured Kabul as Western forces boarded evacuation planes.

US President Joe Biden in particular is facing heavy criticism over the botched handling of the withdrawal in what is being described as one of the biggest foreign policy disasters since the Vietnam War.

However, resistance forces holding out in Afghanistan's final free district, the Panjshir Valley, are continuing to fight back against the Taliban