Health Department lawyers say Chief Health Officer Brett Sutton told them they did not need to hand the hotel quarantine inquiry a series of emails that are now casting doubt over his claims he didn’t know about the hiring of private security guards.

The emails, which weren't provided to the inquiry until the past week, contradict Professor Sutton's evidence about when he found out private security was being used in the bungled hotel quarantine program. 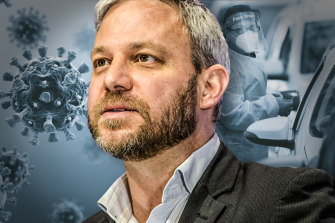 In a letter to the inquiry, Department of Health and Human Services lawyers said Professor Sutton told them the emails did not change his evidence to the inquiry and did not need to be disclosed.

"Professor Sutton stands by that evidence which was provided honestly," the letter, published by the inquiry on Tuesday, said.

"Professor Sutton further instructed us that he did not consider he needed to clarify his evidence and therefore the email did not need to be provided to the board for that reason."

In his written and verbal evidence last month, Professor Sutton told the inquiry that he didn't know private security was being used in the hotels until media reports in late May about COVID-19 outbreaks in quarantine.

Last week, The Age revealed a series of emails were sent to Professor Sutton in March and April that talked about using private security. "He has now been given a week to provide a new affidavit to address the latest information.

Counsel assisting the inquiry Tony Neal, QC, told Tuesday's extraordinary hearing of the inquiry that the documents were relevant, containing matters that occupied a "considerable amount of the board's time" and go to the time at which Professor Sutton knew private security was involved.

"His evidence before the inquiry was that he was unaware of it until media reports concerning the outbreak at the Rydges hotel in May this year came to his attention," Mr Neal said.

The inquiry, which finished hearing evidence last month, called the extraordinary hearing after being alerted to the emails by The Age.

Professor Sutton told media on Saturday that he had seen and responded to one of the emails, but its reference to private security had not registered with him. He also said that he had played no part in a decision to withhold the document from the inquiry.

The board has heard that 99 per cent of Victoria's devastating second wave of coronavirus can be traced back to two hotels set up to quarantine incoming international travellers, where private security guards became infected and spread the virus into the community.

Two senior government figures – health minister Jenny Mikakos and the government's most senior public servant Chris Eccles – have resigned after the inquiry heard evidence of their involvement in the hotel quarantine program.

On Tuesday, three months after the peak of the second wave, Victoria recorded one new case of coronavirus and no deaths.

Premier Daniel Andrews said plans to allow retail and hospitality to reopen could be brought forward in the light of the low numbers, saying Victoria was "well placed this weekend to be able to make very significant announcements about a further step to opening".

The documents released on Tuesday place pressure on Professor Sutton to both explain the contradictions between his evidence to the inquiry and what the emails show and why he believed the information should not have been handed over.

Under cross-examination he said that even if he had known private security was being used, he wasn't familiar enough with the workforce to "foreshadow some of the complexities".

Professor Sutton also denied in his evidence having any role in the planning of Operation Soteria, the name given to the operation that oversaw the hotel quarantine program, but emails already tendered to the inquiry show he was asked to approve a detailed plan for Soteria in early April.

Professor Sutton was included in six emails between March 27 and April 9 that either refer to security or have attached documents referring to security.

In one email chain, Professor Sutton directs another health department official to answer a series of questions posed by the federal Department of Home Affairs about Victoria's hotel quarantine arrangements.

In the chain Health Department deputy director Braedan Hogan writes: "Private security has been contracted to provide security at the hotels with escalation arrangements to Vic Pol [Victoria Police] as needed."

Professor Sutton then acknowledges the response from his department in his reply to Mr Hogan: "thanks so much, Braedan".

In another email that Professor Sutton was copied into dated April 1, Deputy Public Health Commander Dr Finn Romanes wrote that returned travellers would need to be "accompanied by security guards" when going on smoking breaks.

"The individuals would need to be accompanied by security guards and might need to travel floors via lifts to access an outdoor area or leave the building," Dr Romanes wrote.

MinterEllison, the lawyers for the Health Department, said although the department alerted the legal team to the emails during the inquiry, this confirmatory response from Professor Sutton to Mr Hogan was not included.

After the close of evidence to the inquiry on September 25, a department employee who had been a witness in the inquiry asked the legal team whether the email from Professor Sutton to Mr Hogan had been provided to the Board of Inquiry, the MinterEllison solicitors wrote.

This prompted the lawyers to raise the matter with Professor Sutton.

"Professor Sutton instructed us he had not read the detail of the email at the time and that the evidence that he gave to the board was truthful at the time and remains so," the lawyers wrote.

They said Professor Sutton advised that he was receiving hundreds of emails a day and he didn't read the detail of the email.

The Department of Health and Human Services, the lawyers said, were "actively considering whether anything further needed to be done" when the inquiry served a notice to produce the emails.

The lawyers wrote that they didn't disclose the emails to the inquiry because they didn't consider them to be "critical" and shed no light on the vexed question of who decided that private security should be the first line of enforcement in hotel quarantine.

Chair of the inquiry, former judge Jennifer Coate, warned on Tuesday that the inquiry's final report, due to be released on November 6, may now need to be postponed in light of the new information.

"Most unfortunately, these new developments… may unsettle the due date for the report," Justice Coate said.

Victoria's shadow attorney-general Ed O'Donohue said Professor Sutton’s version of events did not add up and raised serious questions about his evidence to the inquiry.

"Either his version of events to the inquiry was less than fulsome, or he simply wasn’t across his responsibilities as Victoria’s most senior public health official," Mr O'Donahue said.