The survivors of the plane crash in Texas on Tuesday were headed to an Astros game in Boston, and recounted feeling “shaky and shocked” following the crash.

All 21 people on board the plane were safely evacuated, and had left the airport on Tuesday morning to cheer on the Astros as they faced off against the Boston Red Sox in Game 4 of the American League Championship Series, Fox 26 reported.

Many of the passengers even left the Houston Executive Airport in Brookshire wearing their Astros jersey as the plane behind them was still engulfed in flames, Fox 26 reported.

McCaskill described feeling “shaky and shocked” after she ran from the burning plane in her Astros jersey. 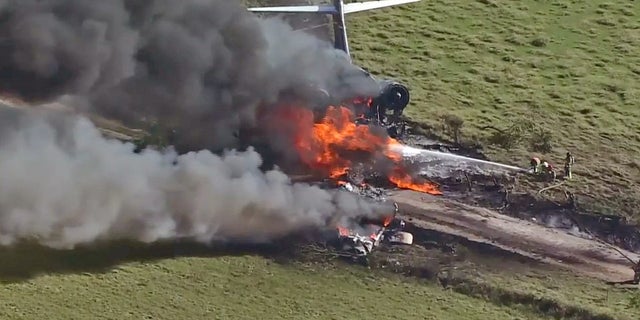 “Yes. Thank the Lord,” Walker said of the passengers being able to tell the tale of surviving a plane crash.

The McDonnell Douglas MD-87 had rolled through a fence and caught fire at the Houston Executive Airport, the FAA said. The plane is registered to a Houston-area investment firm.

The FAA and National Transportation Safety Board is investigating what caused the crash, with the Texas Division of Emergency Management also assisting the federal agencies.

“It’s an accident. Everybody came out safe. It’s under investigation,” one investigator told Fox 26.