Laughing student, 28, groped nurse’s breast while being treated for eating a cupcake laced with cannabis as his girlfriend looked on in silence in ward 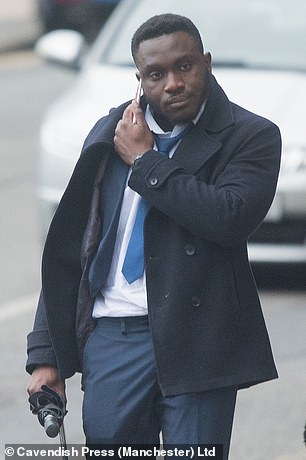 Quadi Azzan, pictured outside Manchester Magistrates’ Court, was found guilty of sexually assaulting a nurse who was treating him for the effects of cannabis

A nurse was sexually assaulted by a patient as she was treating him in hospital for the effects of eating a cupcake laced with cannabis.

The healthcare professional was conducting a heart test upon university undergraduate Quadi Azzan when he suddenly groped and squeezed her breast.

Azzan then laughed at the nurse as she moved his hand away and told him to stop whilst his girlfriend looked on in silence from his bedside.

The healthcare worker was eventually forced to flee the cubicle to fetch a colleague before police were called and later arrested the student at his home.

At Manchester magistrates court Azzan, 28, who studies construction and site management at Salford University in Greater Manchester, was facing jail after he was found guilty of sexual assault.

The 7.30am incident occurred on December 16 last year after mature student Azzan from Salford was admitted to Salford Royal hospital having collapsed after eating cannabis cakes supplied by a college friend.

The nurse told the hearing: ‘I did a blood test and sorted his breakfast and he was there with his girlfriend.

‘He was absolutely fine the first few times of me going in, he was admitted by the night staff I got there and he was alright, he responded me straight away, he was alert and orientated as to what time it was and where he was.

‘He was spitting a little bit when he first spoke as if he was drunk and slurring his words, I saw him three times but it was on the fourth time this happened. It was myself and another nurse, the nurse is quite new so it was left to me I picked up the next job which was the heart trace just to make sure that his cannabis misuse hadn’t had a cardiac effect upon him.

‘He had his eyes closed at first laid on the trolley with both hands down his trousers, I was trying to wake him saying his name and he didn’t answer me so I did the painful stimuli on his shoulder. I told him that I was going to do the ECG and asked if it was ok but then he said: “Ask me a million times.” I thought he was just being cheeky. 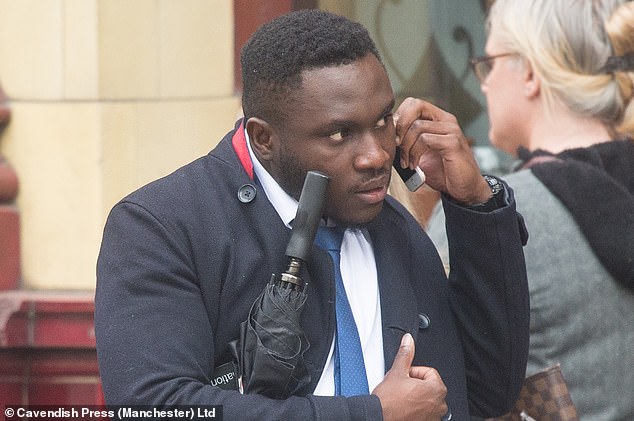 Azzan, pictured, who is a mature student at the University of Salford, grabbed the nurse’s breast. He claims he was under the influence of cannabis at the time

‘I told him to take his hands out from down there because it isn’t appropriate but then he let me do the ECG. He then lifted his top up with his arm and I started to put the stickers on, but as I went to put the sixth one on I leaned over and he felt across my breast. He then moved his arm and did a little squeeze and I told him it wasn’t appropriate and to stop, there was no need to touch me.

‘He was conscious enough to laugh at me and conscious enough to look at his girlfriend who was sat in the room. I just ran out of the room I shouted for one of the nurses that was in charge of the department that day. He was fully alert and was like smirking when he lifted his top up and he laughed at me after the incident.

‘The whole think was inappropriate and he was laughing. I just want to go in and do my job and leave. He knew what he was doing.’ 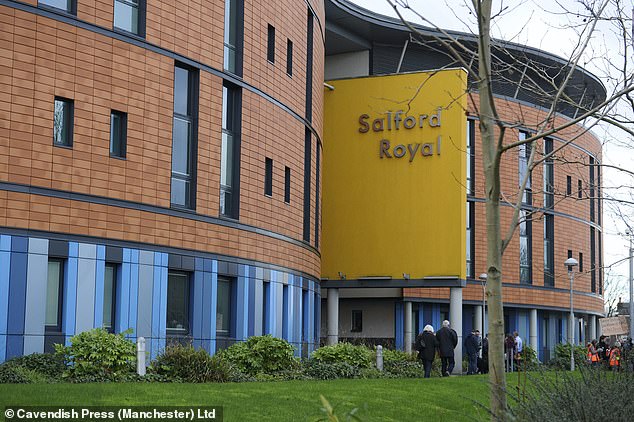 The attack happened inside the Salford Royal Infirmary, pictured, on December 16, last

Azzan denied wrongdoing claiming he could not recall fully the incident in hospital and said he may have touched the nurse’s breast by ‘accident’ due to the fact he was still under the influence of cannabis.

He said he had earlier bought the cupcakes as a peace offering to his girlfriend because had stood her up at a photoshoot they were due to attend together.

Azzan told the hearing: ‘I had been round to my friends house and one of his other friends had some cupcakes and he said there was “a bit of weed in it” but it is fine. I wanted to give them to my girlfriend, she likes cupcakes and I saw them eating them so I said: “do you mind if I take some for my girlfriend?” and I said “I’ll give you a fiver” so he gave me the cupcakes.

‘I went home and I ate the first one and a few moments later I started feeling indigestion, at around 11pm. I just felt like something was making me laugh it didn’t make any sense.

‘As soon as I lay down in bed that is when I felt the effects I felt like something was making me laugh and indigestion. I was thinking what was going on so I didn’t know what was happening it was scary I don’t recall much of what happened after that the only thing I recall is paramedics saying “you will be ok we’ll take you to hospital”.

‘I remember seeing my girlfriend’s face and some other faces which I didn’t recognise and I remember feeling a sharp pain I was just trying to speak to my girlfriend I was asking questions but I don’t think anyone understood – where am I? What is happening?

‘All I recall was the pain I felt the only thing I felt was a pain on my shoulder I think I said don’t touch me.

‘I remember hearing some words and it was constantly repeating itself, the words felt like it was constantly happening I just wanted it to stop I said: “You have asked me a million times.” I felt it was really scary I was so terrified and I thought I was going to die.

‘I remember a flash of someone holding my hand and I felt relieved when I woke up I saw my hand on the nurse and then I went unconscious again. When I felt the hand I felt relaxed it made me realise I’m still alive.

‘The only thing I know is my hand was on her breast when I felt someone hold my hand, it was an accident and I didn’t mean to do it. I didn’t know I was doing it I just felt relieved and I just let go.

‘I think the next time I opened my eyes I was getting up and my girlfriend was holding my hand I didn’t know much after that the next thing I know is the police came and they handcuffed me.

‘I have tried cannabis once before it didn’t really do anything and I was wondering why people use it, I just wanted something to show my girlfriend I was sorry, I didn’t think it would have an effect on me. I thought if she accepts my cake she forgives me I just wanted her to forgive me, I only ate one to prove to my girlfriend it was ok I didn’t know what the full effects of cannabis were.’

Prosecutor, Matthew Siddall told JPs: ‘The reality of this case is the defendant was in hospital treated by the nurse, he put his hand on her chest laughing and had to have it physically removed. The evidence is that he was in control and she distinctly recalls that he was responsive, her evidence was credible she didn’t she didn’t exaggerate anything and she wasn’t throwing mud at him.

‘Don’t confuse the reality of cannabis with what he was actually doing and that was laughing at her. His version of events didn’t make any sense.’

JPs said there was an ‘element of selective recollection’ to Azzan’s evidence. He will be sentenced on May 17.