Beijing: Chinese President Xi Jinping has called for greater global economic integration and warned against decoupling while calling on the US and its allies to avoid “bossing others around.” 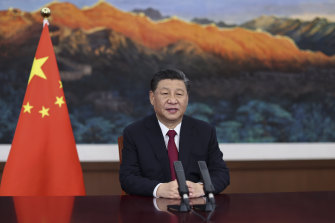 Xi Jinping: “What we need in today’s world is justice not hegemony.” Credit:AP

In a veiled critique of US efforts to reduce dependence on Chinese supply chains and withhold exports of goods like advanced computer chips, Xi said “any effort to build barriers and decouple works against economic and market principles, and would only harm others without benefiting oneself”.

“What we need in today’s world is justice, not hegemony,” Xi said, adding that China would never engage in an arms race. “Bossing others around or meddling in others’ internal affairs will not get one any support.”

Xi spoke by video to more than 2,000 officials and business executives attending the Boao conference in person in the southern island province of Hainan. Global leaders and the heads of the International Monetary Fund and United Nations attended the opening ceremony via video-link, according to state media.

After cancelling the forum last year because of the pandemic, China is signalling it’s open for business with the resumption of the conference, billed as an Asian version of the World Economic Forum in Davos. Officials have in the past used the event to announce major steps to open up the financial system, including the establishment and expansion of the stock connect program that links mainland exchanges with Hong Kong.

China is making a concerted effort to improve ties with US businesses in particular. A slew of American executives are participating in the forum, including Apple’s Tim Cook, Tesla’s Elon Musk, Blackstone Group’s Stephen Schwarzman and Bridgewater Associates’ Ray Dalio.

A key focus was on any new climate goals from Beijing, following promises from the US and China to work together to tackle climate change after a visit by US President Joe Biden’s global climate envoy John Kerry to Shanghai last week.

Xi didn’t provide any new targets on his drive to cut China’s carbon emissions or tackle global climate change. His speech had multiple mentions of the words “green” or “sustainability,” but offered no new pledges or suggestions for the pathway to carbon neutrality.

Biden will host a virtual climate conference on Thursday and Friday with world leaders. Xi will participate in the event, Dow Jones has reported.

Secretary of State Antony Blinken said the US is falling behind China in the race to seize opportunities created by climate change. The issue will increasingly be at the centre of U.S. foreign policy but Blinken vowed that the Biden administration won’t let other countries get away with bad practices such as human rights abuses because they’re making progress on curbing climate change.

The argument appeared to be aimed at rebutting growing criticism, particularly from Republicans, that Kerry may trade away US interests in a push for climate cooperation with China.