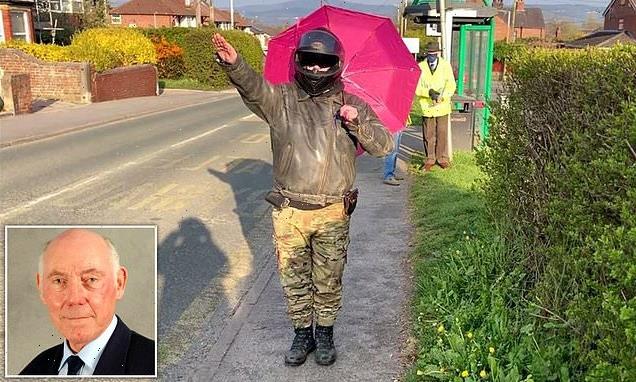 Ex-Rhodesian police superintendent, 83, who is now speed gun volunteer in Wales is confronted by pink umbrella-wielding protester who blocks his cameras and raises arm in ‘Nazi salute’

Speed gun volunteers tackling irresponsible drivers were faced with a bizarre protest by a pink umbrella-wielding biker who was determined to teach them a lesson.

Campaign leader Arnold Woolley, 83, revealed how members of the anti-speed group were dumbfounded by the pink brolly blocking their cameras.

The local councillor leads the community speed watch team while his wife Paula, 85, also volunteers in the town of Buckley, Flintshire, North Wales. The couple are used to coming face-to-face with angry motorists who spot them in their high-vis jackets on the roadside.

But even they were taken aback when an angry biker staged a one-man protest with a pink umbrella in a bid to block their speed guns – and appeared to give a ‘Nazi’ salute. 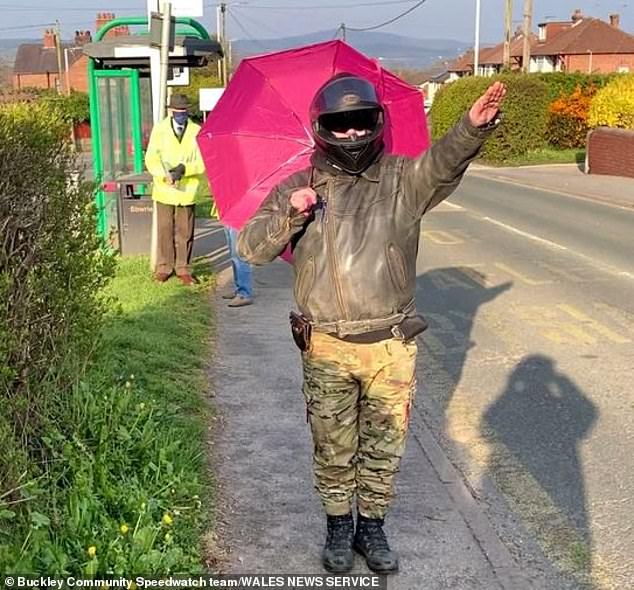 The group in Buckley, Flintshire, north Wales, faced a bizarre protest by a pink umbrella-wielding biker who was determined to teach them a lesson

Cllr Woolley, who serves on Flintshire County Council, said: ‘It was futile because we could work around him anyway.

‘A volunteer went over to have a word with him and the man said he was doing nothing wrong or illegal and was just standing there.’ 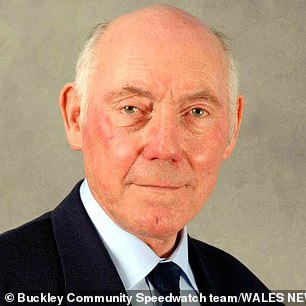 Former Rhodesian police superintendent Arnold Woolley, 83, revealed how his anti-speed group was confronted by the pink brolly blocking their cameras

He said the crew has also seen a large Alsatian-type dog perched on a driver’s lap while passing them.

He said: ‘When we see things like that, we just shake our heads sadly. We aren’t permitted to intervene, so we just have to watch them drive past. We’ve seen it all here.’

The Buckley Community Speed Watch team was set up in 2016 and is made up of a team of retired professionals.

They aim to keep the roads a little bit safer by providing data to the police while also aiming to ‘better educate drivers.’

Anyone who is snapped by their speed funs will then receive a cautionary letter from GoSafe – the police speed team.

Cllr Woolley said: ‘Team members are not at roadsides to pinch pounds out of drivers’ pockets by way of fines, or to see driving licences decorated with penalty points via a court hearing.

‘We are at roadsides to try to better educate drivers, not to punish them.’ 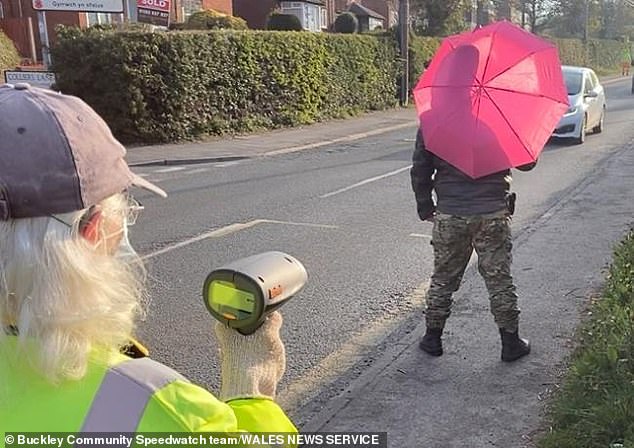 Cllr Woolley says he was confronted by a speeding motorcyclist on one of his first ever outings.

He said: ‘He made a swing at me and began thumping me in the chest. Nothing too serious.

‘Usually, I would have ignored it and let him go on his way but I looked into his eyes and could see they were like pins. So I had to report him for drugs offences.’

Cllr Wooley and wife Paula both got involved with the CSW team after seeing what speed can do during their time in Africa.

He rose to become a superintendent in the Rhodesian police force and led anti-terrorist units, commanded a SWAT team and oversaw traffic policing.

The couple spent 23 years in Nyasaland and Rhodesia, before they were forced to flee the continent with their two young children when a price was put on Cllr Wooley’s head by army militants.

The CSW team recorded 5,517 speeding vehicles and generated 5,124 letters to their owners in the first three years. The highest speed they have recorded on a 40mph road was 84mph.