San Diego: Kate Rubins, who is the midst of her second stint as a researcher aboard the International Space Station, has cast her ballot in the 2020 presidential election.

Rubins filled out an electronic ballot and emailed it to Earth on October 22, while floating in zero gravity about 350 kilometres above the planet, NASA said.

She posted a tweet that said, simply, "I voted today". Rubins, who is currently the only American in space, was floating near a sign that read, "ISS voting booth." 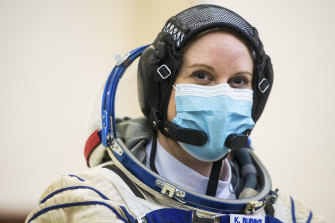 "It's critical to participate in our democracy. We consider it an honour to be able to vote from space", she said afterwards.

NASA astronauts have had the right and ability to cast ballots from space since 1997, when David Wolf became the first to do it. He was aboard the Russian space station Mir at the time.

She arrived at the space station on October 17 for the start of a six-month mission that will be heavily focused on research. The NASA astronaut, who is 42, earned a bachelor's degree in molecular biology at UC San Diego in 1999 and a doctorate in cancer biology at Stanford in 2005.

During her first mission aboard the outpost in 2016, she became the first person to sequence DNA in space. She also conducted two space walks.

Jessica Meir, who also graduated from UCSD, returned to Earth in April from an extended stay aboard the space station. During the flight, she became part of the first all-woman team of spacewalkers.

It is possible that Rubins or Meir could be selected to serve on a mission in 2024 in which NASA will place the first woman, and next man, on the moon for the first time since 1972.

Our weekly newsletter delivers expert analysis of the race to the White House from our US correspondent Matthew Knott. Sign up for the Herald‘s newsletter here, The Age‘s here, Brisbane Times‘ here and WAtoday‘s here.