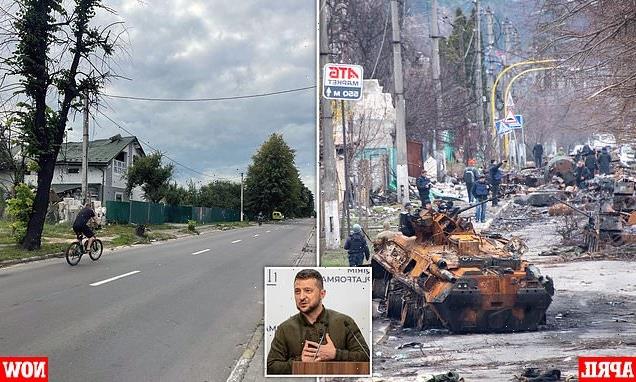 The debris can be swept away… but memories will never heal: Six months into the deadly conflict in Ukraine, RICHARD PENDLEBURY, who was there at the start, returns to find grief and defiance at site of massacres

Outside St Michael’s monastery in Kyiv, one of Vladimir Putin’s ‘wonder weapons’ – a thermobaric rocket launcher – is being hoisted on to a low loader.

It has a blast hole in its armoured turret, possibly caused by a British donated anti-tank rocket. And, while it will play no further role in Putin’s ‘special military operation’, it will take part in an ‘ironical parade’ of captured Russian equipment to mark today’s Ukraine Independence Day.

The shattered hulks of dozens of Putin’s tanks, armoured fighting vehicles and other heavy equipment stretch from block to block along Khreshchatyk, Kyiv’s main boulevard; a vivid demonstration of Ukraine’s surprise success in resisting the Russian invasion.

We’re exactly six months into Europe’s most dangerous conflict since the Second World War. Winter has become spring and now high summer and tomato vines laden with fruit are growing through a fissure that runs across a collapsed highway where it traverses the Irpin River. I can guess why they are there. In early March, I had stood on that very spot, in a snowstorm, as refugees filed across the river via a makeshift wooden pontoon.

Boxes of bread, fruit and vegetables had been left there for the fugitives to pick at as they passed. Some of those donated tomatoes must have fallen through gaps in the ruptured road and, as the weather warmed, their seeds germinated.

It is an example of how nature can adapt to survive. But what of Ukraine itself? 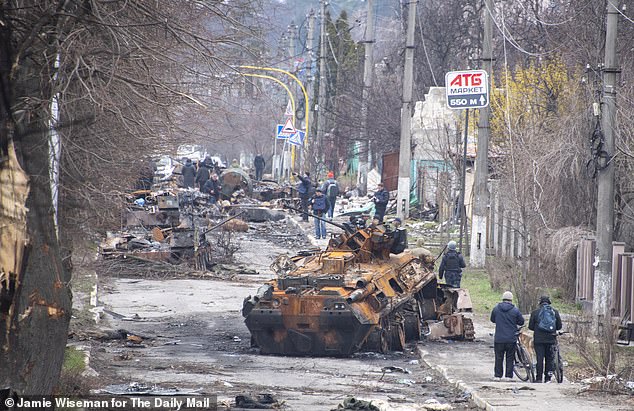 The scenes in the Railway Station Street in the Kyiv satellite town of Bucha in April, where evidence of war crimes were found 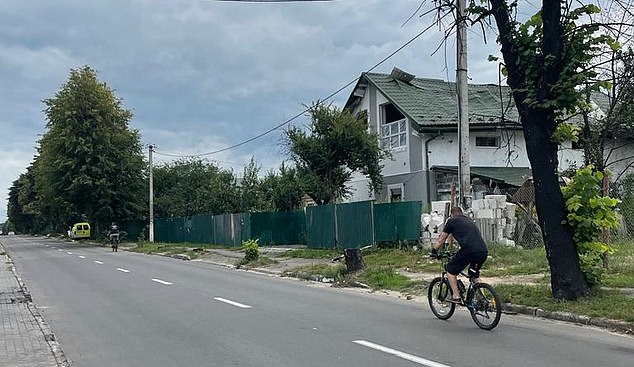 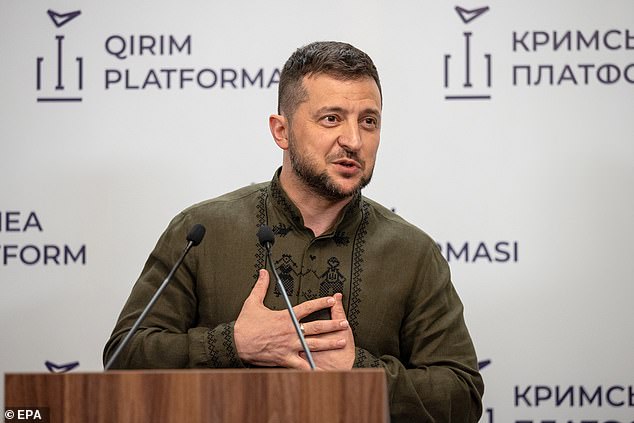 Ukrainian President Volodymyr Zelensky speaks to the media after the summit of the Crimea Platform, in Kyiv, on Tuesday

Beyond all expectations, most of this country remains independent. More than five million of its women and children fled the country as refugees in the first weeks of the war, when it seemed that Ukraine had to succumb. Instead, it was the Russians who suffered defeat after embarrassing defeat.

Ukraine claims to have killed some 45,000 ‘occupiers’ on the battlefield and is poised to launch a major counter-offensive to recapture the southern city of Kherson. President Volodymyr Zelensky has promised his forces will eventually take back Crimea, which Russia annexed in 2014.

The Russians gave up their bid to capture Kyiv in late March and have concentrated their efforts on the Donbas region in the east. The nearest active front lines are now hundreds of miles away from the capital. Yet Kyiv is on a new knife edge. Many people I spoke to here, including high-level diplomatic sources, fear Putin will choose Independence Day to take revenge on Ukraine – and Kyiv in particular – with a retributive barrage of ballistic missiles.

The successful strikes against Russian bases in Crimea in the past week have heightened such trepidation. ‘It has been like poking Putin with a stick. He is humiliated,’ one diplomat told me.

Russia has also blamed Ukraine for the recent car bomb assassination in Moscow of the daughter of ultra-nationalist philosopher Alexander Dugin, who is known by some as ‘Putin’s Brain’. Dugin has called for revenge.

President Zelensky has warned citizens of the possibility of ‘nasty’ and ‘cruel’ attacks. Civil servants at government ministries here have been told to work from home today. Yesterday the US embassy here issued a warning that the ‘department of state has information that Russia is stepping up efforts to launch strikes against Ukraine’s civilian infrastructure and government facilities in the coming days’.

I returned to Ukraine for the first time since April on the night sleeper to Kyiv. The civilian airspace remains closed so there is still no other way to get to the city apart from road.

The last time I passed this way – on the first day of war – no one was heading east, only west. Now I’m sharing my four-berth compartment with a couple from Kyiv who have decided to return from exile. 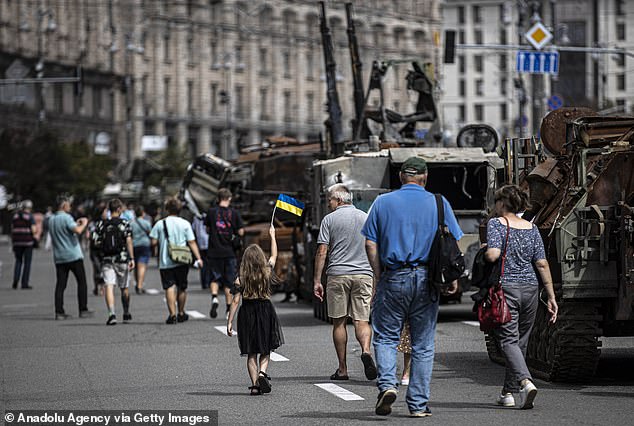 Beyond all expectations, most of this country remains independent six months since the conflict began 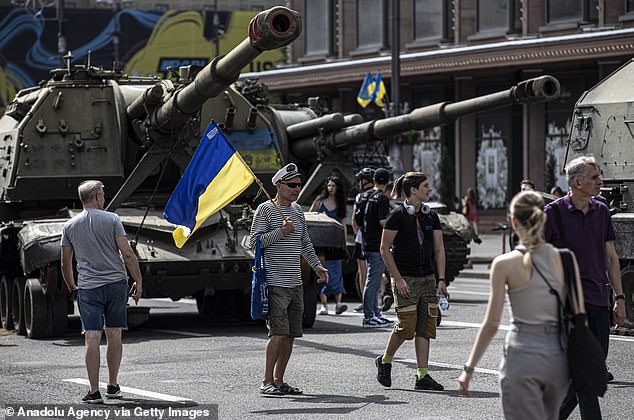 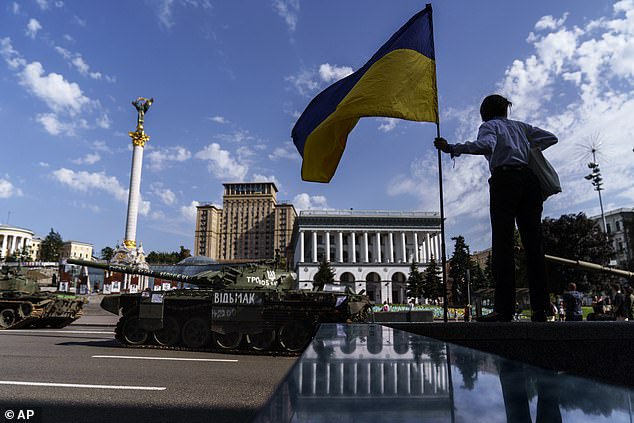 The rest of the train is similarly full; mostly with mothers and children or young women who have spent the last six months as refugees and are now going back. There is no air conditioning or even refreshments during the 15-hour journey. But people want to go home.

At Kyiv’s main station, the ornate entrance hall is quiet. The Red Cross emergency first aid post has gone. Outside, most of the anti-tank obstacles and military checkpoints that were on every street in early wartime have also disappeared. The traffic is, once again, nose to tail.

I was anxious to return to Bucha, the Kyiv satellite town that became synonymous with the murder of civilians by Russia’s military. Superficially, it too has come back to life. The glaziers and construction teams have been busy.

Railway Station Street, which in April had presented a spectacular vista of devastation, now resembles any other quiet suburban thoroughfare.

The field behind the Church of St Andrew the First-Called, where I stood in the rain and watched corpse after murdered corpse being recovered from a mass grave, is covered in summer grass and flowers. But beneath the tranquil surface deep trauma remains. In the crypt several old ladies are in conversation. Neonila, 82, tells me: ‘We still live in fear here. I get frightened when I hear the air-raid siren and I have a gut feeling that the Russians will come back.

‘Recovery is much harder for those who lived through what happened here in Bucha rather than those who became refugees. I saw a woman who was pushing a trolley of water shot dead in front of me. You don’t forget such things.’

Of the possibility of missile attacks today, she said: ‘Independence Day is a holiday for us but I don’t think many will be celebrating. It is not the time for that. Ukraine is stuck in someone’s [she means Putin’s] throat right now and they will not leave us alone.’

The parish priest, Father Andrii Halavin, says that life remains hard for many. 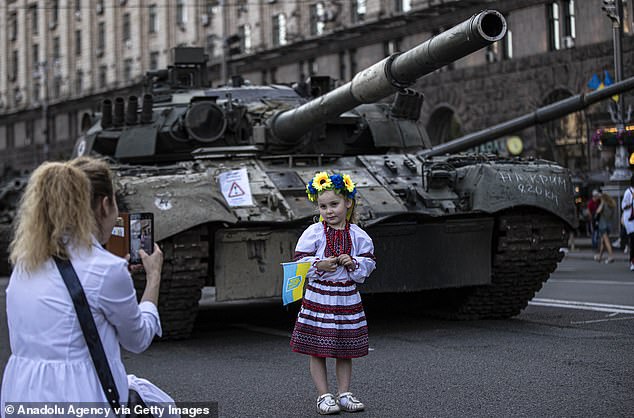 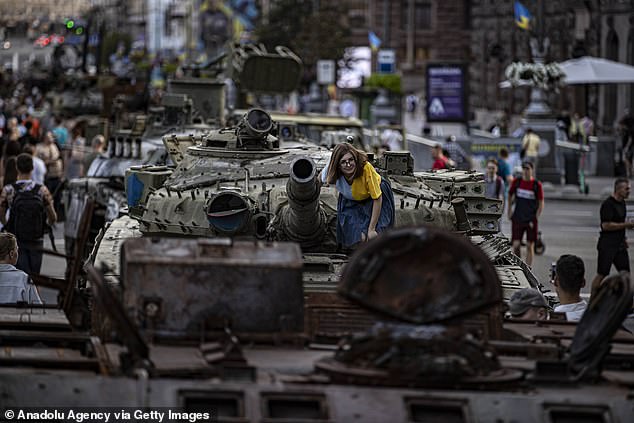 Ukraine claims to have killed some 45,000 ‘occupiers’ on the battlefield and is poised to launch a major counter-offensive

‘Some still do not have a roof over their heads,’ he says. ‘The state cannot provide sufficient help to all of those people, as everything must go to help the boys on the front line. Everyone understands, but it doesn’t make the lives of those who lost their homes less miserable.’

Irina’s plight is particularly tragic. She must remain in the war-damaged house on the edge of Bucha where the Russians murdered her husband, brother and two of her cousins. She has nowhere else to go.

I went looking for her this week because on another terrible day in April, Mail photographer Jamie Wiseman and I bore witness to the recovery of half a dozen murdered civilians who had been shot, then piled on top of each other and burned with petrol by Russian troops.

At the time the victims were unidentified. Now I know that two of the bodies were those of Irina’s cousins.

Clearly she is still in shock. Her house is scarred by shrapnel and machine gun fire. Her front door was removed by the Russians to make a barricade and has yet to be properly replaced. Her fence was knocked down by a tank.

We talk in the overgrown garden where her brother was tortured and executed – she shows me a picture of his shattered body that she keeps on her phone.

‘Why did they kill my family?’ she asks repeatedly. ‘I have no idea why they committed such cruelty. Wednesday is a big anniversary for our country but a lot of people are expecting new attacks as a result. Putin likes to turn our cities into rubble.’

The Russians may have retreated but the forests and fields around Bucha continue to throw up fresh horrors. In the town’s main cemetery there are 21 fresh graves. The burials took place earlier this week.

Each plot has a cross with a generic name plate. But there are no names, only numbers – these are the graves of the unidentifiable dead. The first simply says: ‘Here lies Number 252. May they rest in peace.’

Nearby, three siblings are tending the grave of their mother who was murdered during the occupation. They are reticent and downbeat. ‘Months have passed since our mother was killed but nothing has really changed,’ says one of the young men. ‘This war has stolen our youth.’

Today should be one of celebration for Ukraine. The country has much to be proud of in the way it has resisted its giant neighbour. But with Putin as your enemy, death is never very far away.