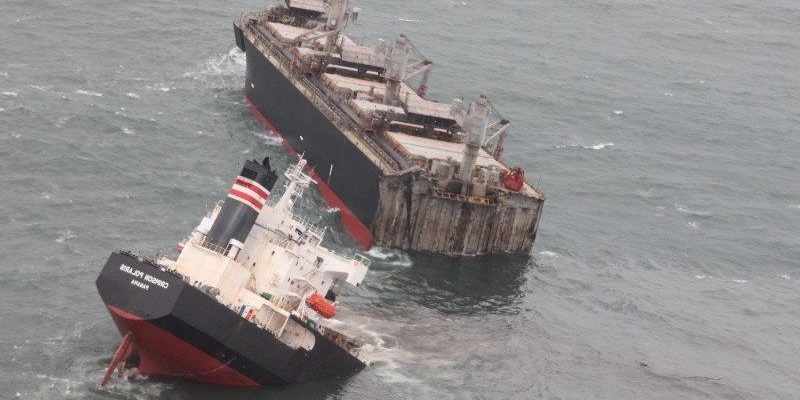 Tokyo: A Panamanian-registered ship ran aground in a northern Japan harbour, then split in two and was leaking oil, but there were no injuries among the 21 crew and the oil leak was being controlled with no signs it had reached shore, the Japan Coast Guard said.

The 39,910-tonne vessel, the Crimson Polaris, was carrying wood chips when it ran aground on Wednesday morning in Hachinohe harbour. 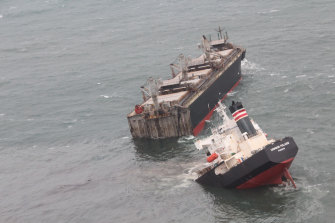 The Crimson Polaris broke in two and was leaking oil.Credit:Japanese Coast Guard via AP

It managed to free itself, but due to poor weather was unable to move far and ended up anchoring about 4 kilometres out from the port.

The vessel, which was at the end of a voyage from Thailand, split in two early on Thursday, the Coast Guard said.

An oil slick 5.1km long by about 1km wide was visible later in the day, but containment measures were being taken by patrol boats. 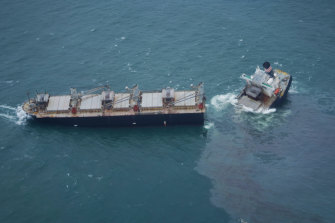 A large oil slick could be seen in waters surrounding the ship.Credit:Japanese Coast Guard via AP

The vessel’s two parts have not moved and are being closely monitored by patrol boats, and by late afternoon there had been no apparent major change in its situation, a Coast Guard spokesman said.