New York: A controversial South Korean pastor has been strongly criticised for leading thousands of followers to a rally in central Seoul, a move that President Moon Jae-in called "an unpardonable act" during the sharpest rise in coronavirus cases in five months.

South Korea initially performed well in the fight against COVID-19, but the number of new cases has soared recently, with 279 on Sunday, following 103 on Friday and 166 on Saturday. 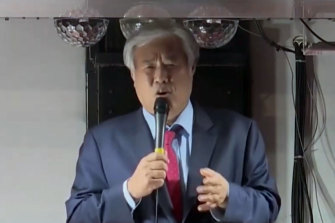 Most of the new infections were among worshippers at the Sarang Jeil Church in Seoul, where 240 people have tested positive, and at another church in the surrounding province of Gyeonggi.

Tightly packed, fervent prayer services in some South Korean churches have made them particularly vulnerable to the virus.

The Reverend Jun Kwang-hoon, the leader of the Sarang Jeil Church and an outspoken critic of the government, used Saturday's rally, organised by another anti-government conservative group, to claim that the outbreak in his church had been caused by a "terrorist" attack aimed at crippling political activism.

"They poured the virus on our church," the 64-year-old said during the rally, which drew thousands of elderly worshippers. 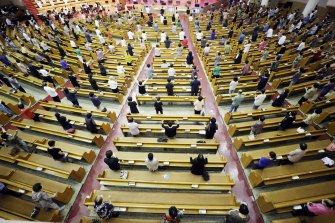 Christians wear face masks and maintain social distancing at a service at the Yoido Full Gospel Church in Seoul, South Korea on Sunday.Credit:AP

The Seoul city government had banned the rally and temporarily shut down Jun's church, citing fears that a large gathering would help spread the virus.

More than 4000 church members were ordered to self-isolate for two weeks and submit to a test.

The pastor ignored the order, and was accused of violating self-isolation rules by participating in the rally. He was also accused of "obstructing" epidemiological investigation by failing to submit a full list of church members for testing and tracing. The city said it would sue Jun.

Writing on his Facebook page, Moon said: "Many of those who needed to be in self-isolation turned out in street protests, raising the serious possibility that they have spread the virus to protesters who came from around the country.

"This is a clear challenge against the disease-prevention system of the state and an unpardonable act against the safety of the people." 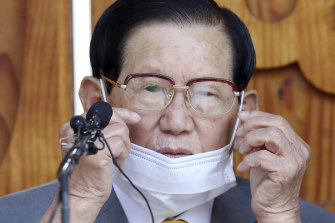 Lee Man-hee, chairman of the secreative Shincheonji Church of Jesus was arrested as part of an investigation into how thousands of worshippers were infected in February and March. Credit:Yonhap/AP

Another Christian sect, Shincheonji Church of Jesus, was at the centre of the country's largest outbreak of Covid-19 infections in February.

The secretive group was linked to 36 per cent of total cases and, on August 1, authorities arrested Lee Man-hee, its founder, for allegedly hiding crucial information from contact tracers.

Kwon Jun-wook, a deputy director of the Central Disease Control Headquarters, warned of "early signs of a large-scale resurgence of the virus".

The government has tightened social-distancing rules in Seoul and Gyeonggi, which have a combined population of about 20 million people.

Under the new rules, spectators will be barred from professional baseball and football games.