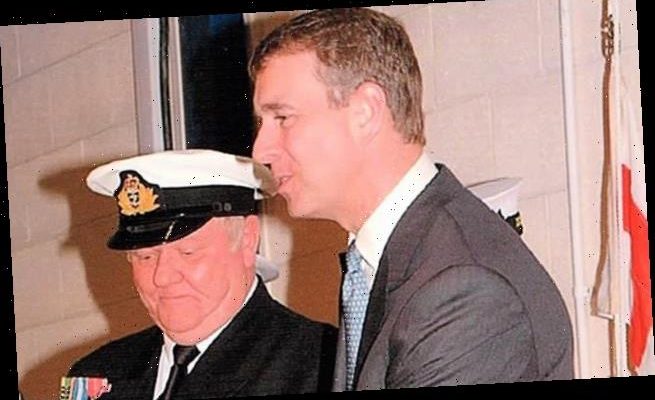 Peter Sherwin once rubbed shoulders with the Duke of York during a royal ceremony at cadet site TS Stirling in Birmingham in 2001.

Sherwin was regarded as a ‘pillar of the community’ prior to his death in 2014.

And, as a Royal Navy reservist, he was made a member of the Order of the British Empire (OBE) for his service to the military in the Queen’s 1987 Birthday Honours list.

At the time of his, aged 67, Sherwin, who had suffered from lung cancer, had his reputation intact.

An investigation into allegations of physical and sexual abuse made against him had been dropped months before his death by police due to lack of evidence.

To date, the Sea Cadets have paid out over half-a-million pounds in out-of-court settlements to ‘survivors’ who say they were abused by the regional lieutenant commander.

The organisation say they were only aware of the allegations following Sherwin’s arrest in 2013 – and that he was suspended pending the investigation.

He was later reinstated after the case was dropped. 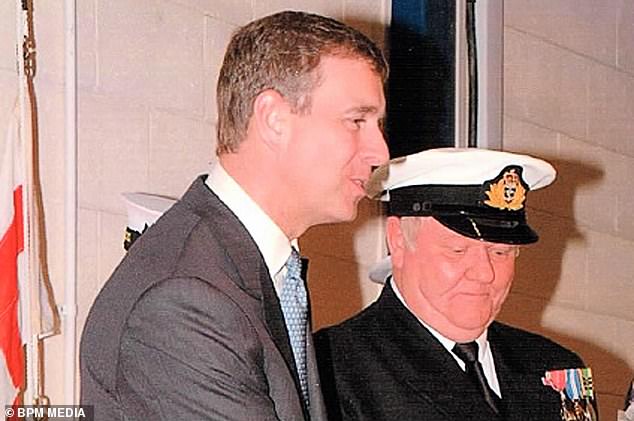 Associate solicitor at Bolt Burdon Kemp, Jessica Standley, who represents the 22 alleged victims, claims that Sherwin was the subject of complaints in the 1980s but continued to be allowed ‘unfettered access’ to cadets.

She said: ‘Complaints were made in the 1980s and had proper investigations taken place and procedures been followed then others could have been spared the traumatic experiences they went on to suffer.

‘Sherwin had total control and access to cadets over decades and many continue to feel let down that action was not taken earlier.

‘Sherwin’s death means he cannot be brought to justice through the criminal courts, but I hope that those impacted are able to obtain justice, and find closure through recognition of what they have been through in their civil cases.

‘It is clear to me, given the time that Sherwin was involved in the Cadets, that many people will have been impacted by his actions and, sadly, I do not think we will ever know the true extent of his wrongdoing.’

It comes as one of Sherwin’s accusers described him as a ‘calculating paedophile’.

‘He was this icon in the community. In reality, he was the classic calculating, predatory paedophile. He was straight out of the text book.’ 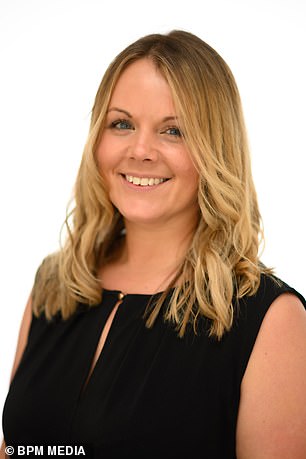 Associate solicitor at Bolt Burdon Kemp, Jessica Standley, who represents the 22 alleged victims, claims that Sherwin was the subject of complaints in the 1980s but continued to be allowed ‘unfettered access’ to cadets

The Nuneaton man, who has received a payout from the cadets, alleged he was subjected to abuse at the hands of Sherwin.

Like two other alleged victims, he described being tied, beaten and abused.

The man, who attended the cadets in the 1970s, said: ‘He sexually abused me on many, many occasions.

‘He had what was called a ‘blues routine’ when he made you dress up in different costumes.

‘He made me get into sports gear. They were stained and white and dirty. You had to strip and put the shorts on.

‘He’d handcuff you to a radiator pipe, it seemed like hours, and he’d whip you with a CB aerial. I used to beg him to stop hitting me.’

He claimed that Sherwin would put a cat under the shirts of cadets before hitting the animal – causing it to scratch the alleged victims.

‘He’d also put it in your sleeping bag. That made me feel sick, I hated that,’ the man said.

The man said he kept the secret locked away until adulthood and believed he was the only person who had been targeted.

But he said it led him to play truant at school and he became a ‘complete nuisance’.

He said: ‘I felt no one was going to believe a 13-year-old. Everyone was scared of him – he was feared by the grown-ups in the organisation.

‘He was a very, very clever man. For four decades to do what he did and get away with it, he had to be.’

Sherwin’s CV glistened with good deeds and revealed a raft of community work.

But the man claims he was reprimanded for his ‘heavy handed’ tactics way back in the 1980s.

He maintained: ‘There was a letter of complaint sent to London in the early 80s and, basically, people were told to put up or shut up.’

The Sea Cadets, an organisation that works with 10,000 young people across the UK, has stated it was only made aware of the allegations when West Midlands Police contacted its safeguarding team in July, 2013.

Sherwin, suffering from lung cancer, was arrested in October of that year, but the case later dropped due to lack of evidence.

He was immediately suspended by the cadets following his arrest, but re-instated when cleared.

However Sherwin’s alleged victim is highly critical of the way the Sea Cadets have handled the growing storm. 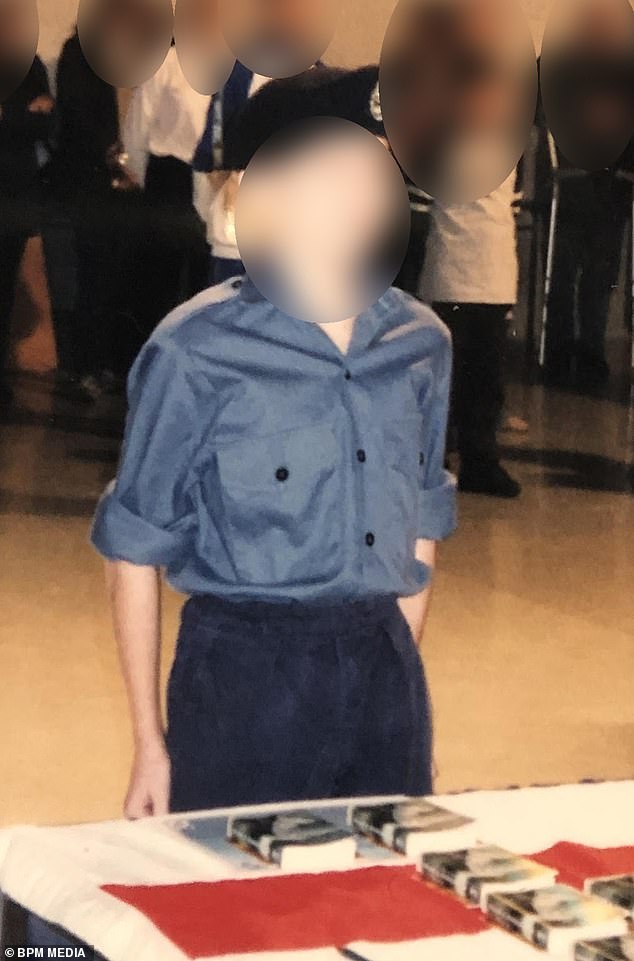 A Nuneaton man, who has received a payout from the cadets, alleged he was subjected to abuse at the hands of Sherwin while he was in the cadets (pictured)

‘I think it’s diabolical. Five of us received a letter, a generic letter with just the names changed.

‘They said sorry, it’s just a token. Nobody has contacted me over the phone. They are not learning. There is nothing in place to help adults who have gone through this in the corp.’

The Sea Cadet movement – one of the country’s oldest charities – hasissued an unreserved apology.

In a statement it said: ‘Sea Cadets unreservedly apologises for any hurt or anger felt by any victim of abuse. We are investigating the claims regarding the late Peter Sherwin.

‘Based on an independent review of all records across the charity, and on interviews with former employees still alive whom we can trace, the first the charity were aware of any claims related to the accused was in June, 2013, when our safeguarding team were contacted by West Midlands Police.

‘Following his arrest on October 14, 2013, Mr Sherwin was immediately suspended from Sea Cadets.

‘The police case was dropped in mid-November 2013 due to lack of evidence. We ask anyone with any information to share it.

‘Sea Cadets takes safeguarding concerns very seriously and has a zero tolerance approach to any abuse.

‘Our specialist safeguarding team manages all safeguarding cases in line with the charity’s safeguarding policy and procedures and statutory responsibilities.’

The spokesperson said the charity has a 24/7 incident reporting line and staff and volunteers were put through enhanced criminal record checks.

It said the charity also worked closely with the NSPCC And Childline and had training in the form of its Shout! programme – to encourage cadets to share allegations of abuse.

‘Our culture encourages our cadets, volunteers and employees to speak up, disclose and confront any issues,’ the spokesperson added.

MailOnline today contacted Buckingham Palace for comment about Sherwin’s meeting with Prince Andrew – which took place 12 years before the police investigation into the allegations against the cadet leader.

The ceremony was held at TS Stirling to mark the Birmingham unit’s successful lottery funding bid in 2001.