A satellite passing over North Korea has captured a "one in a million" image, moments after a missile was launched from Hodo peninsula, east of Pyongyang, on Saturday.

The image, captured at 10.54am local time, was analysed by Jeffrey Lewis, director of the East Asia Nonproliferation Program at the Middlebury Institute of International Studies. 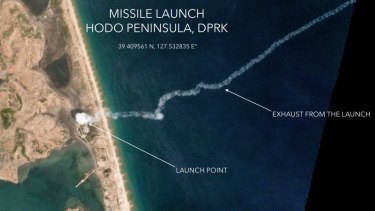 A satellite image from Planet Labs shows the North Korean missile launch on May 4. Credit:Planet Labs

Lewis told CNN "the location of the launch, the thick, smoky appearance of the exhaust and the fact that there is only one rocket trail all suggest this was the short-range ballistic missile that North Korea showed in its propaganda".

He said the image, captured by Planet Labs, would have been taken "within a few seconds, maybe a few minutes" of the missile's launch.

Planet Labs co-founder and chief executive Will Marshall described the photo as "damn improbable", tweeting "but if we take >million images/day we’ll get one in a million shots!"

US Secretary of State Mike Pompeo said on Sunday that North Korea's missile launches "didn't present a threat to the United States" and its allies, nor did it derail the Trump administration's attempts to reach a denuclearisation deal with the isolated authoritarian state.

Pompeo stressed that the missiles were short range and therefore did not violate the agreed moratorium on missile launches, which he said only involved intercontinental missiles.

"At no point was there ever any international boundary crossed," Pompeo said when asked about the missiles. "They landed in the water east of North Korea and didn't present a threat to the United States or to South Korea or Japan. 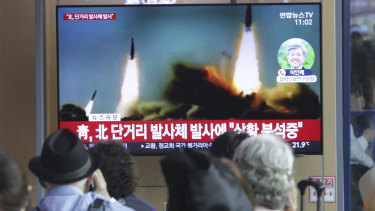 "We still believe that there's an opportunity to get a negotiated outcome where we get fully verified denuclearisation," Pompeo said. "So we hope that this act that [North Korean leader Kim Jong-un] took over the weekend won't get in the way. We want to get back to the table.

Pompeo was asked about President Donald Trump's tweet on Saturday, in which he said Kim "knows that I am with him".

On Friday, Cindy Warmbier, whose son Otto died as a result of injuries he suffered while a prisoner in North Korea, called the Kim regime a "cancer on the earth" and said the efforts at diplomacy were a "charade."

Pompeo said Warmbier was a "noble, wonderful, gracious woman," for whom he had "enormous sympathy".

But he defended the President, saying Trump had "put on the toughest sanctions in the history of the world against North Korea".

"You'll recall the beginning of the administration where the President spoke about fire and fury," Pompeo said.

"Before we go another direction, we want to see if there's any possibility we can achieve this outcome. It's very straightforward."