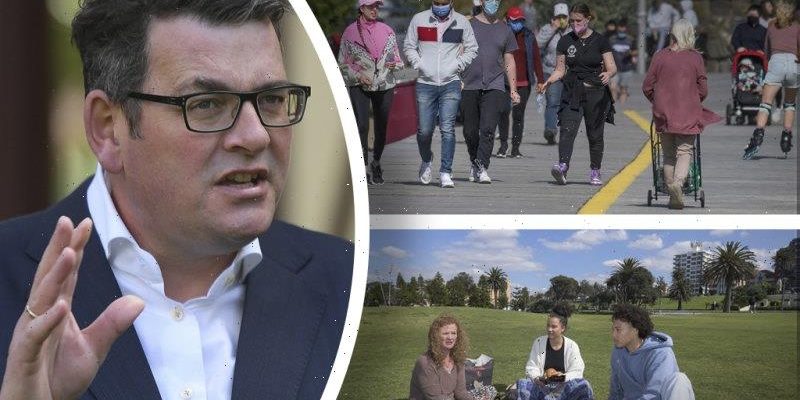 For me, it was almost a year to the day when the dam burst. I was watching the Melbourne Symphony Orchestra’s virtual performance of Paul Kelly’s Leaps and Bounds, a shout-out to a city that had been in hard lockdown since early August.

My computer screen was a mosaic of musicians and vocalists blended with footage of a deserted Bourke Street mall and empty Sidney Myer Music Bowl: “I’m high on the hill, Looking over the bridge, To the MCG,” the choir sang celestially, alongside an aerial shot of the abandoned sacred ground at dawn. 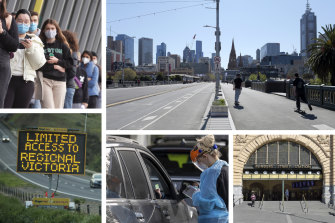 Victorians, and Melburnians in particular, have endured long lockdowns.

And that was it. The repressed grief of the previous six months, the shock of all my certainties – including the mundane certainty of an AFL grand final at the MCG – upended by a once-in-a-hundred-year event, finally found expression.

“I remember…” came the chorus, and on cue, I started sobbing. Hard.

Feeling all the aforementioned emotions as well as hope – the latter being what? Inherent in the human condition? The mystical footprint religion leaves on the soul of even the most fervent unbeliever?

I wasn’t alone in believing 2021 would bring vaccines and salvation. And as we smothered the virus back to zero, we felt almost saintly. Had an emissary from a year into the future told me that vaccines would indeed arrive but so would an infectious new strain and that this time our emancipation would likely come at a deadly cost, I might have dismissed the missive as fake news. 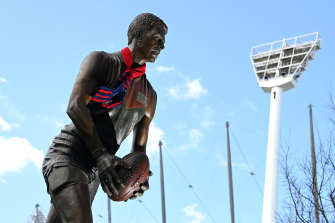 A Demons scarf adorns the statue of Jim Stynes outside the MCGCredit:Getty Images

But here we are. The weekend’s grand final once again on foreign interstate ground and in what seems nothing less than a cosmic insult, once again featuring two Victorian teams.

And the epidemiologists and medical experts are begging us for one final sprint, begging us to dig deep into our reserves and wear masks, get tested, stay at home, hang back, for the next few months until 80 per cent of adults are double-jabbed, and then..?

And then I’m not sure, really.

Will the roses at Flemington still smell as sweet when Cup Day might see the already stretched staff at hospital ICUs bracing for a fresh influx of patients?

Will we really be up for expansive Christmas gatherings if the more pessimistic of the Burnet Institute models seems to be panning out with COVID deaths on track to peak at more than 2000 in January?

According to the modelling, even if the present lockdown was to remain past the 80 per cent vaccination threshold, hospitals would still have a one-in-four chance of being overwhelmed.

So, the trade-off we’re being offered is a fraught, guilt-inducing calculation in which the promise of more life is shadowed by the prospect of more death.

For now, most COVID deaths in Victoria and NSW involve the unvaxxed – a group that will be whittled down to the intentionally unvaxxed as the criminally glacial vaccine rollout gathers pace.

Alas, there’s no helping some people; the inoculated sensible cannot be made hostage to the unprotected stupid. But as the evidence from places such as the UK and Israel shows, vaccines, while stunningly effective, cannot protect every vulnerable person. COVID’s victims will include the blameless.

“We have got to open the place up because remaining closed forever has its own cost,” was Daniel Andrews’ new mantra when he unveiled the road map on Sunday.

The day before his “long- awaited” announcement, I was a mess of anticipation, resentment and dread. As far as I was concerned the Dan vs Gladys show, in which Melbourne’s Twitterati propagandise the Andrews government’s moral superiority on COVID for going hard, and going all the time, jumped the shark some time ago. 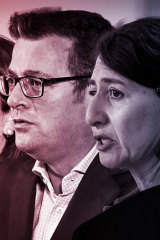 Premiers Daniel Andrews and Gladys Berejiklian have taken different paths out of lockdown.

The NSW Premier had been unforgivably sluggish on lockdowns sure, but at least she now had a plan for opening up, she was pressing hard on the accelerator.

We, on the other hand, were stalling in neutral, our battery close to flat.

Down the phone, a friend delivered a rant that echoed my own embittered internal monologue. “Dan better tell us our kids are going back to school, or else…” she said, minus a stream of expletives.

Our kids are indeed going back to school, not as fast as I’d wished but fast enough for me to lay down my arms.

It is funny, though. Once the full meaning of Dan’s “long-awaited” paradigm shift began to dawn on me, I found myself unsettled by his pivot to “this’ll be tough but make no mistake we’re opening up”.

It is absolutely the case that remaining closed forever has its own, unacceptably high, cost. As a community, we should not be called upon to make sacrifices greater than those baked into the road map, which already allows for tighter restrictions should hospitals become overwhelmed.

As individuals, though, we are custodians of the city’s contrarian superego. Melbourne is home to overlapping tribes, including COVID deniers, “professional protesters” and construction workers, invariably revolting.

But – admit it – for a big chunk of us the fact we’re on track to be the longest locked-down city in the world is a source of perverse pride. I’d wager that well into next year restraint will be the new black in one last push to keep infections down as vaccination coverage inches towards universal.

The weather is usually rubbish anyway. I reckon I’m getting a second wind in this martyrdom caper.