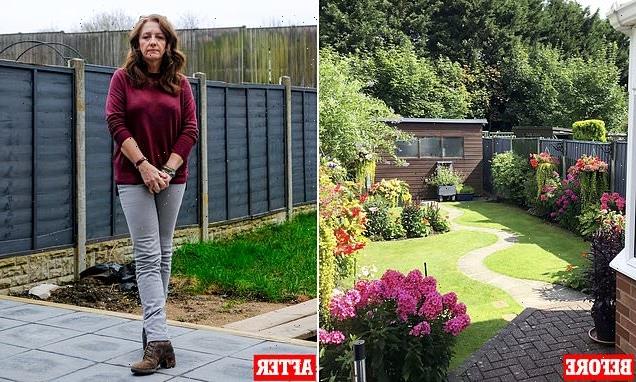 Furious residents have hit out at highways bosses’ decision to fell 100 trees that have now left their properties exposed to one of Britain’s busiest motorways.

Homeowners living in Quinton, Birmingham, were left gobsmacked when rows of once sturdy conifers began to disappear from behind their back gardens last month.

The trees have been growing there for the past 50 years shielding the homeowners from light, noise and pollution coming from the nearby motorway – which is used by tens of thousands of vehicles each day.

But now devastated locals have been left in tears as a result of their formerly tranquil back gardens being left an eyesore and fully exposed to noisy traffic.

Shocking before and after pictures show one garden bursting with colour surrounded by lush green trees which has now been left with barren views of the motorway.

Residents say the noise of thousands of lorries thundering past their properties each day has made living in their homes unbearable.

Some are even being awoken at night by their beds physically shaking from the vibrations caused by passing traffic.

And beams of light coming from HGV headlights have lit up bedrooms ‘like Blackpool illuminations’ and left them feeling as if they are ‘living in a nightclub.’ 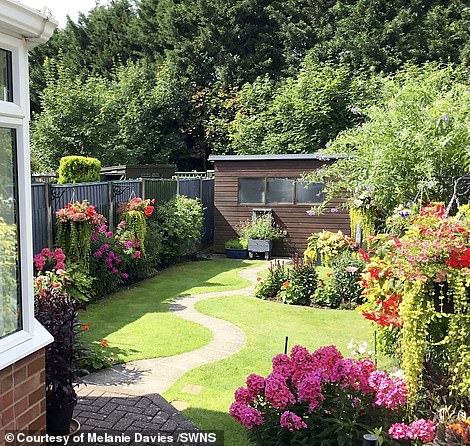 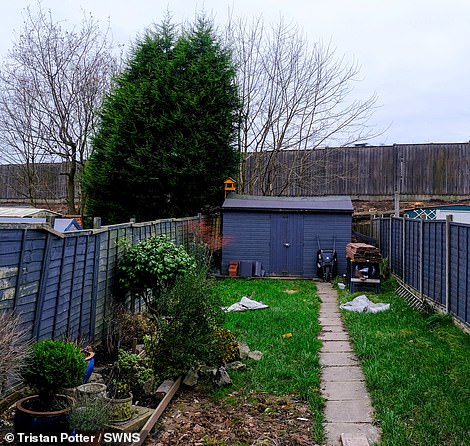 Before and after: Pictured left are the rows of once-sturdy conifer trees that protected homeowners in Quinton, Birmingham from the worst of the M5’s traffic, noise and pollution. Pictured right is the scene today 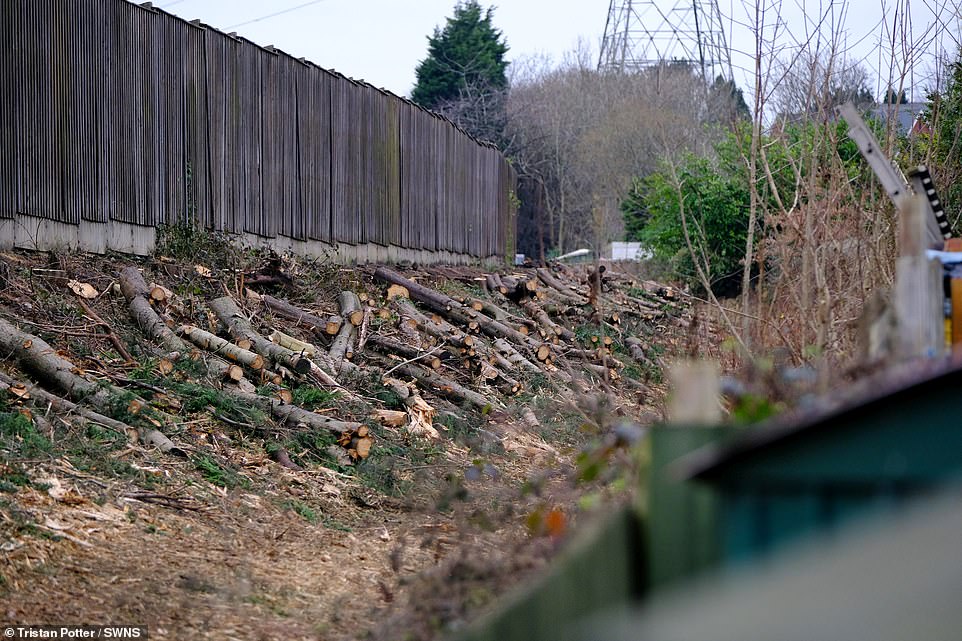 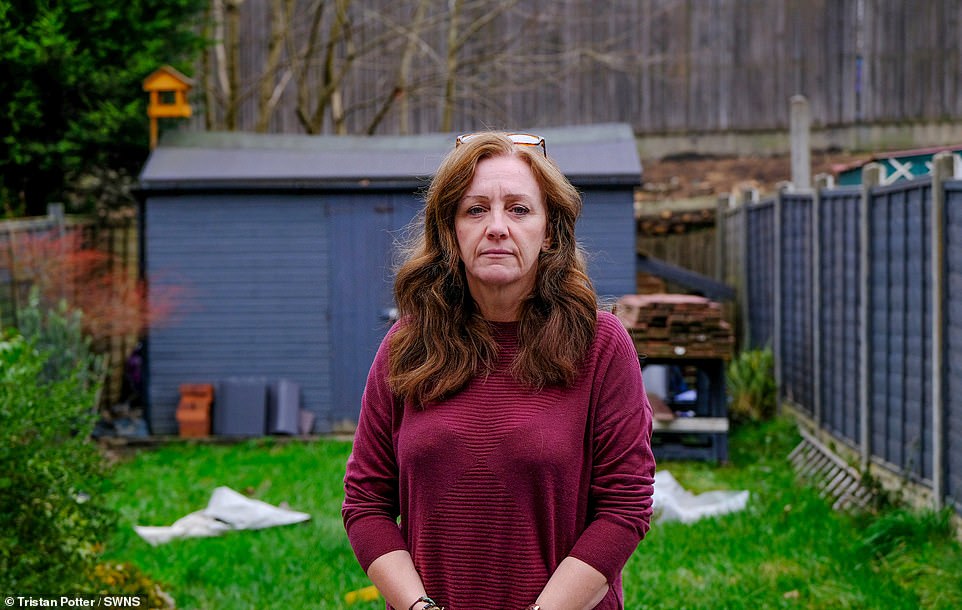 Melanie Davies, 51, a health and safety consultant, moved into her £175,000 terraced property last April and broke down in tears when she saw the unsightly tree stumps where conifers once proudly stood

The smell of fumes billowing over their fences and through windows has also left homes smelling ‘like a petrol station’, according to some residents.

The environmental impact of the trees being felled by National Grid and National Highways has seen an end to habitats that once homed bats, badgers, birds and other wildlife visiting gardens.

Families have instead been left with rows of unsightly tree stumps behind their homes and now only a battered fence protects them from any motorway accidents.

As a result, property prices on Clay Drive and Village Mews have dropped in value by as much as £30,000 almost overnight.

Melanie Davies, 51, a health and safety consultant, moved into her £175,000 end terraced property last April and has spent £50,000 renovating the place.

She admitted she broke down in tears when she saw the unsightly tree stumps where rows of conifers once proudly stood.

She said: ‘The first day I walked in after they started the work, I dropped to the floor in tears. I just collapsed. It has been heartbreaking.

‘I only moved into this house in April and have poured everything into renovating it and the garden was next on the list to do but I feel like there’s no point anymore.

‘Those trees were put in 50 years ago as part of a planning agreement to shield the residents from the motorway. Now they seem to have just torn that up.

‘There was a wildlife belt running between our fences and the motorway but now we haven’t seen any bats or birds in any of our gardens, their habitat has also been destroyed. 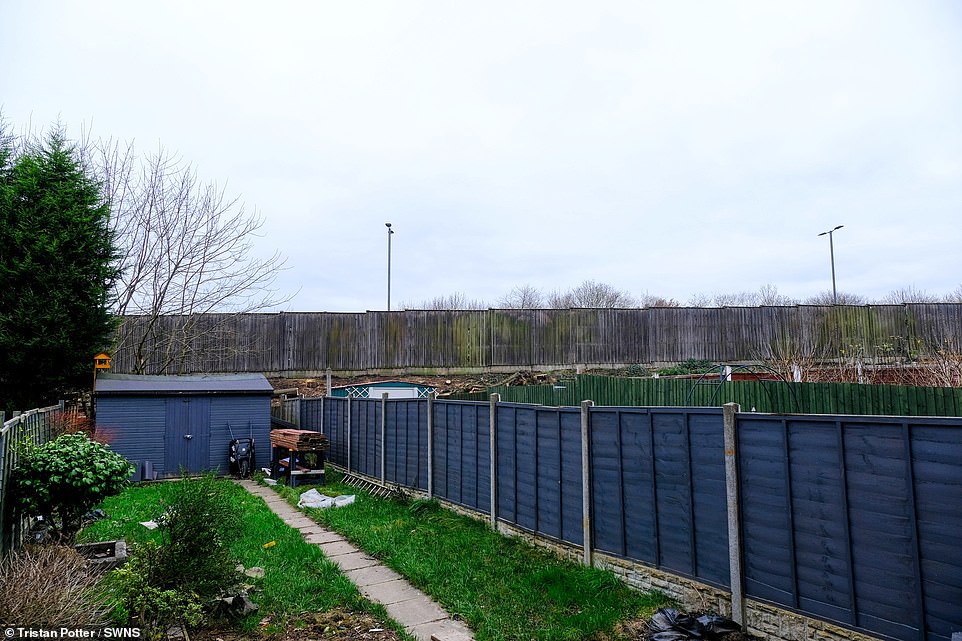 The M5, pictured behind the blue shed in Melanie Davies’ garden in Quinton, is among Britain’s busiest motorways 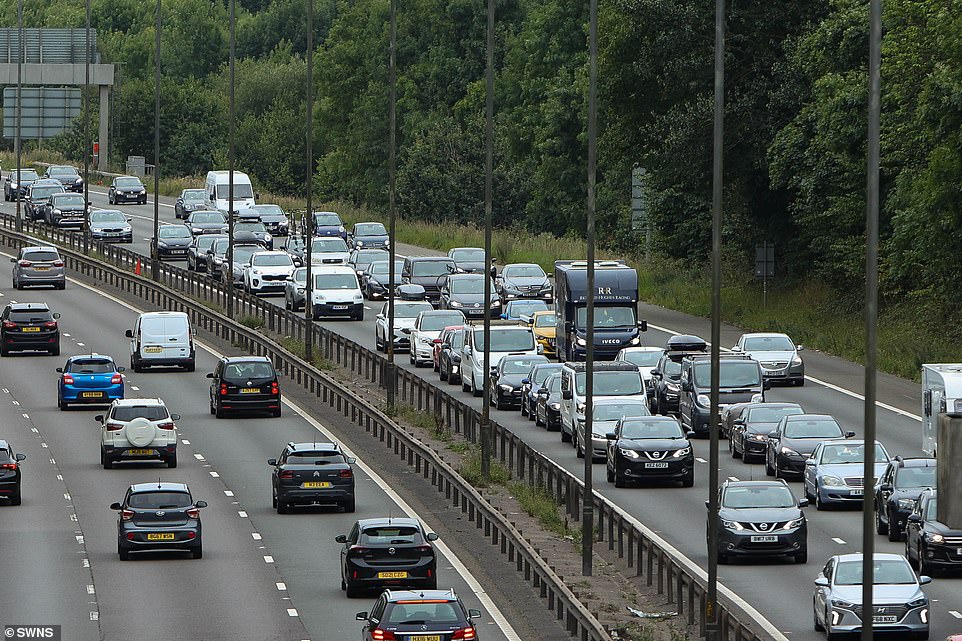 The smell of fumes billowing over their fences and through windows has also left homes smelling ‘like a petrol station’, according to some residents. Pictured: Traffic building on the M5 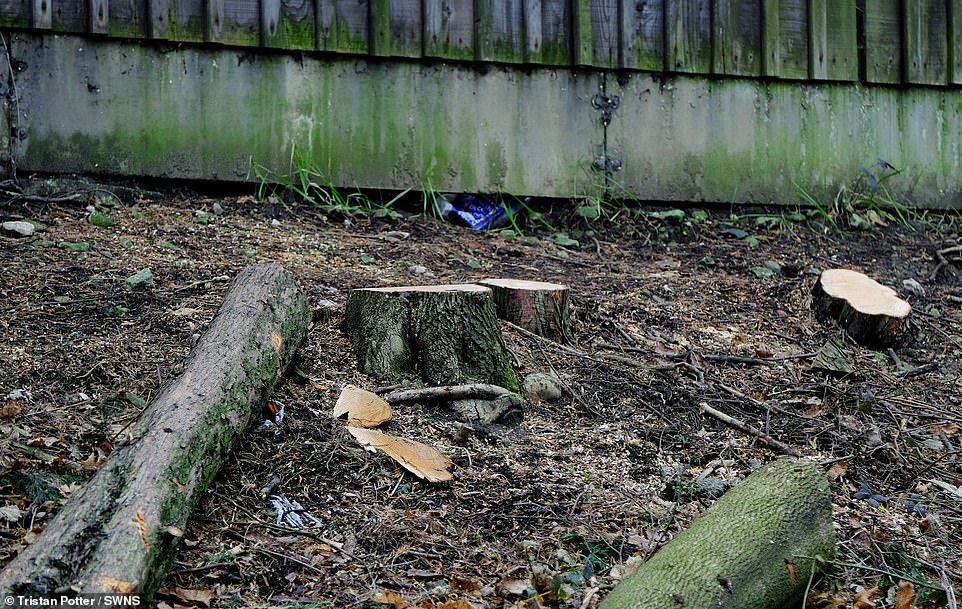 ‘They are saying its for safety reasons to protect the motorway but all 100 of them cannot be unsafe and its on a sloped embankment coming in our direction.

‘If anything they have made it more unsafe – putting us at risk of the affects of pollution and if a lorry crashed it would now come into our gardens. How is that safe?

‘All they had to do was maintain them or remove dead tress – not destroy an entire stretch. They have done it quickly before anybody could object.

‘What has been left behind is just devastating. Lorry drivers can now see into our homes and the fumes pouring into our properties is disgusting.

‘It is like living in a petrol station. You can smell the motorway, it’s vile.

‘I have moved from the back bedroom because the lorry headlights pour into the house making it like Blackpool illuminations.

‘As there are gaps in the fence, it causes a strobe effect which makes you feel like you’re trying to sleep in a nightclub.

‘The traffic has gone from being a faint hum to the sound of lorries thundering past.

‘The trees shielded all of this until now You can’t get away from it, it’s just relentless.

‘It has all been done underhand and without any consultation with residents.. If they are citing health and safety where are the impact assessments?

‘They cannot provide them. This has all been done behind the backs of residents. It is uncalled for, unnecessary and been done without justification. 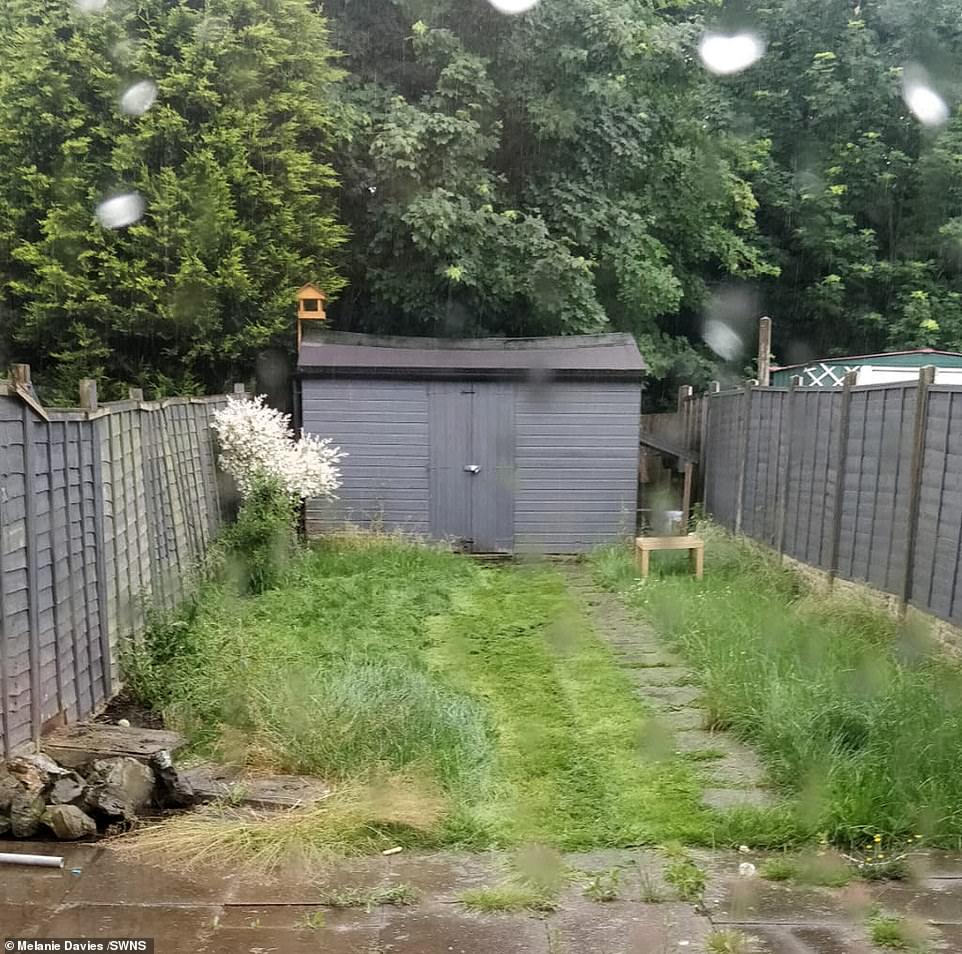 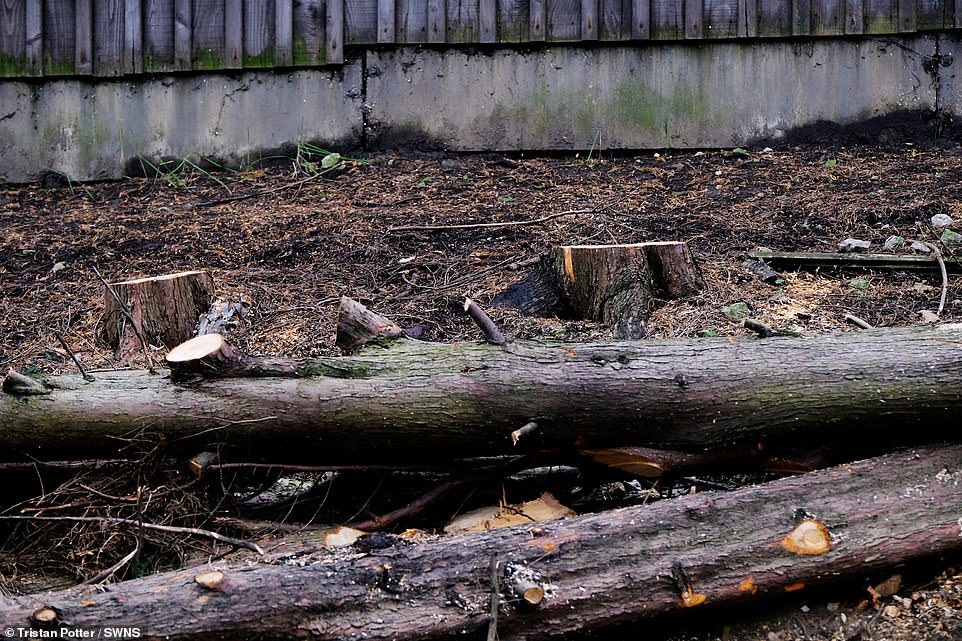 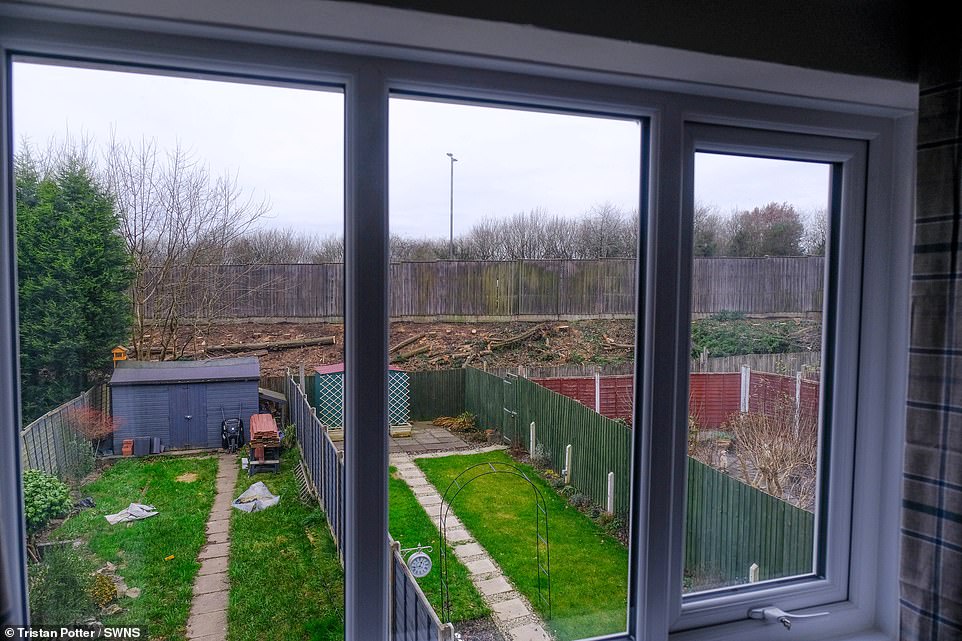 ‘There is something not right but they have deep pockets to fight any legal battles and they know residents like us don’t.

‘I don’t want other communities to suffer like ours. Their actions have been nothing short of cruel and barbaric.

‘We have a terminally ill resident unable to relax in her own home and people being awoken at night as their beds are shaking due to the traffic.

‘My new next door neighbour hasn’t moved in yet, God knows what she’s going to think when she moves in because it’s not the house she bought anymore.

‘National Highways say they will plant more bushes, but ones that are only 5ft tall so how many years is it going to take those to grow?

‘I’ve put so much time and effort into making this house a home, but I just don’t enjoy my life here anymore.

‘Some people night say we should have known what we were getting living by a motorway but we knew what we buying and the noise has never been a problem before.

‘Now, it is literally like living with a motorway running through your home..’

Another resident, Michael Lawrence said the motorway was not a problem when the trees were still standing. 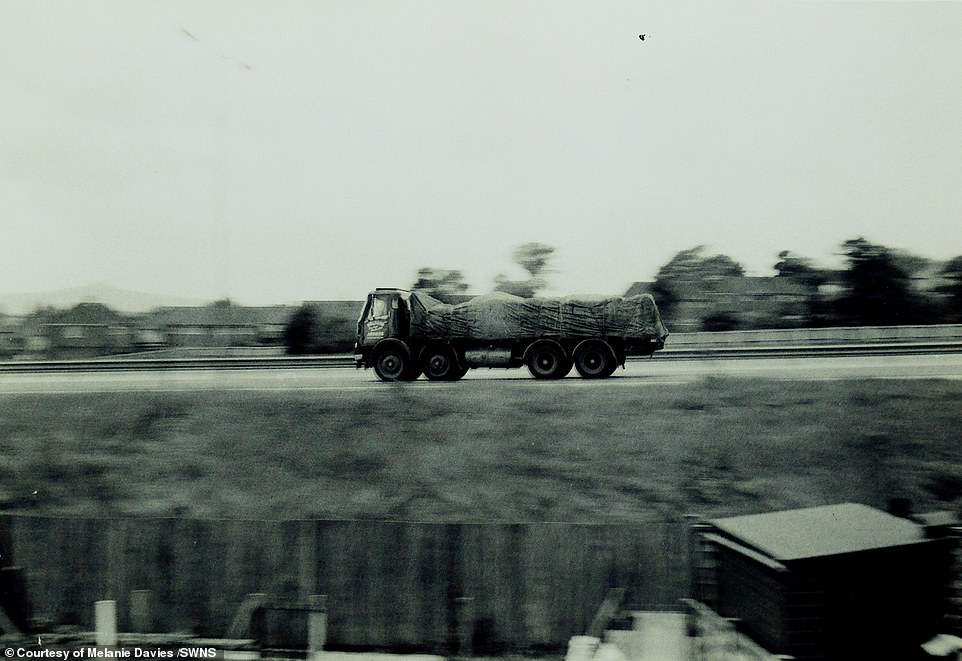 He added: ‘Now they’ve gone, the wildlife has gone too, pollution has increased and the view has been completely ruined.

‘We had no time whatsoever to have a dialogue with National Grid.’

Connell McHugh, who lives on Chichester Drive, added: ‘The trees would shield you from the excess dust, light and pollution.

‘When you buy a house next to the motorway you accept there’s going to be noise, but the greenery made it feel that bit more homely and inviting.’

Preet Kaur Gill, the Labour MP for Birmingham, Edgbaston, has since written to National Grid to demand an explanation.

She wrote: ‘The residents, and I, were deeply troubled by the poor communication regarding this work.

‘I am dismayed as to why you think this course of action is appropriate, and I want a full explanation of why this has happened.

‘These works were not minor, and residents should have been fully consulted, not notified. There was no time given to any of these residents to even question these works.

‘These trees were planted when the estate was built, intended to protect the residents and their property from the motorway.

‘The residents can now smell and hear the motorway through double-glazed windows, and the lights shine through their curtains.

‘In addition, the residents have been left with tree stumps. There is now only one, broken fence protecting them from the motorway.

‘There is also an environmental concern, this row of trees had become an ecological pathway, and was home to many bats.

‘With the trees completely cut down, I am very concerned that key environmental habitats were destroyed. I am interested to ascertain if any impact assessment and ecological assessment was carried out.

‘The government hosted COP26 this year and states that climate is a priority. Removing over 50 trees does not reinforce this message.’

Tory councillor Dom Stanford said he ‘massively sympathised’ with the residents affected by the increase in noise and pollution.

He said: ‘This has seemingly come out of nowhere, without an enormous amount of consultation, which is what I think has shocked and upset so many residents here

‘The responses they’ve had from National Grid have been fairly abrupt and quite rude in nature which hasn’t helped the situation.

‘I’ve taken their reports about light pollution and noise concerns on board and have contacted National Highways to urge them to take immediate steps to mitigate the effects of cutting down the trees.’

National Grid said the trees had been removed due to the risk to traffic and nearby power lines as part of a joint partnership with National Highways.

The land where the trees were planted belongs to National Highways, which said it had agreed to replant with fast-growing species.

A spokesperson for National Grid said: ‘We understand the concern of local residents, but this was essential safety work to protect overhead power lines, motorway traffic on the M5 and local residents.

‘We have a legal requirement to ensure safe distances between trees and power cables.

‘In previous years we have reduced the height of these trees without removing them fully.

‘However, our specialist arborists are clear that approach is no longer safe as regular cutting can cause this species to re-grow in such a way that can result in an increased risk of the trees falling or branches breaking off onto powerlines, the motorway or into residents gardens.

‘National Highways, who own the land the trees were planted on, are replacing the trees with a more suitable species in order to continue to provide screening of the motorway.’

National Highways programme development manager, Ian Doust, added: ‘We’re working in co-operation with National Grid to replace trees that need to be removed near the M5.

‘We’ve agreed to plant fast growing species in the area.’

It comes as new data suggests the festive getaway could be the busiest on UK roads in five years as around 27million take to the roads between Friday and Christmas Eve.

The RAC predicted there will be an average of 4.1million such journeys taking place every day next week, reaching a peak of 5.3million on Christmas Eve.

Drivers are advised to set off early or postpone their trips until after dark to avoid the worst of the traffic. Meanwhile separate research said December is the second deadliest month for drink-driving.

Analysis of Government figures by Brake found 6,140 people were killed or injured in collisions involving at least one driver over the alcohol limit on Britain’s roads during December between 2012 and 2019.