It's a question that has plagued astronomers for years: How did supermassive black holes, which can weigh billions of times the mass of the sun, grow so large, so quickly? Now, scientists are closer than ever to the answer.

NASA announced last week that a potential "missing link" between the universe's first supermassive black holes and young, star-forming galaxies was hiding in plain sight — and it helps explain some of the mysteries of how the universe formed.

Using data from the Hubble Space Telescope, astronomers found a rapidly growing black hole dubbed GNz7q. The scientists say it's been "lurking unnoticed" in one of the most highly-studied areas of the sky, the Great Observatories Origins Deep Survey-North field.

Using archival data from Hubble's Advanced Camera for Surveys, a team of international researchers determined the "monster" object existed just 750 million years after the Big Bang, during the "cosmic dawn" — the early period after the birth of our universe. It's the first of its kind to be discovered.

Scientists found a compact source of ultraviolet and infrared light, which could not be attributed to star formation alone; rather, it matches the radiation expected by materials falling into a black hole. They say the best explanation is a fast-growing black hole covered in dust, which will eventually emerge as a quasar, a brilliant source of light at the heart of a baby galaxy.

This type of black hole that transforms into an extremely luminous quasar was predicted by theories and computer simulations but never observed — until now. The findings are published in the journal Nature.

"Our analysis suggests that GNz7q is the first example of a rapidly growing black hole in the dusty core of a starburst galaxy at an epoch close to the earliest supermassive black hole known in the universe," said lead author Seiji Fujimoto. "The object's properties across the electromagnetic spectrum are in excellent agreement with predictions from theoretical simulations." 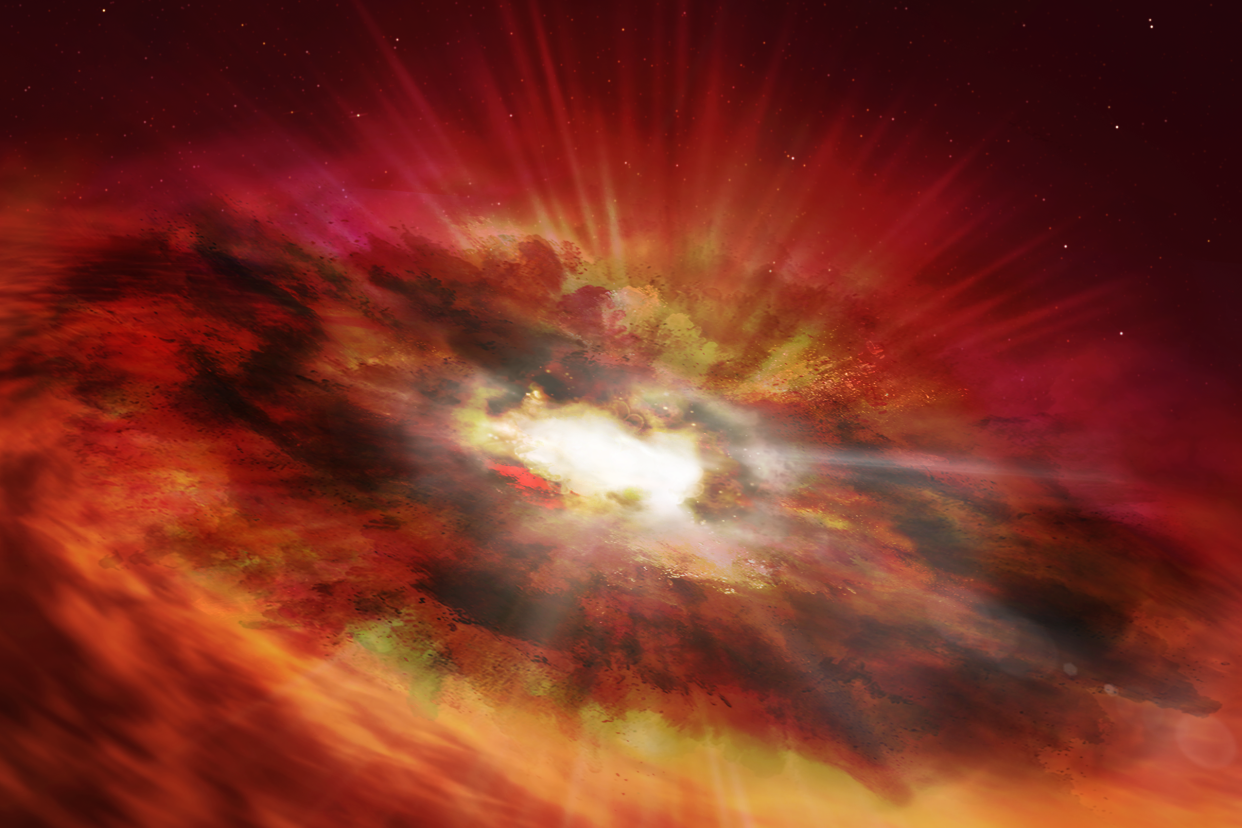 Other interpretations of the data are possible, but scientists say the observations are in strong agreement with their earlier theories. They were surprised to spot the monumental discovery in what may be considered a more obvious location, suggesting the possibility of many more similar objects.

"GNz7q is a unique discovery that was found just at the center of a famous, well-studied sky field — it shows that big discoveries can often be hidden just in front of you," said team member Gabriel Brammer. "It's unlikely that discovering GNz7q within the relatively small GOODS-North survey area was just 'dumb luck,' but rather that the prevalence of such sources may in fact be significantly higher than previously thought."

Next, the team plans to search for related objects using dedicated surveys. Researchers will also use the newly-launched James Webb Space Telescope's spectroscopic instruments to further study GNz7q in more detail — and figure out just how common these types of objects are.