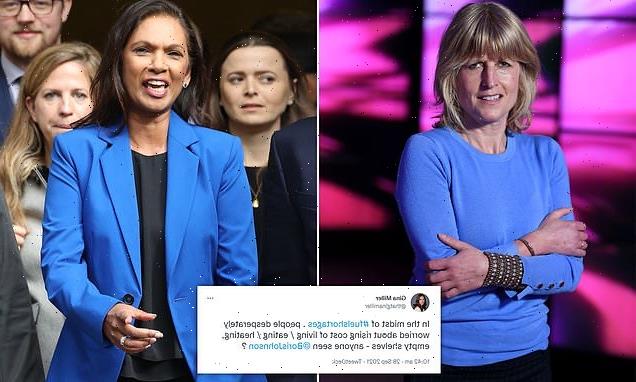 ‘It was our mother’s funeral yesterday Gina’: Rachel Johnson slaps down Gina Miller after the anti-Brexit campaigner sarcastically asked Twitter, ‘anyone seen Boris?’

Boris Johnson’s sister Rachel has slammed an anti-Brexit activist for asking where the Prime Minister was the day after his mother’s funeral.

To which Ms Johnson bluntly responded: ‘It was our mother’s funeral yesterday Gina.’ 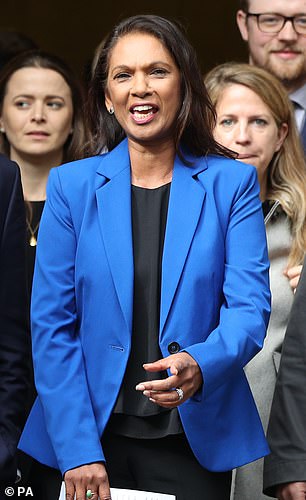 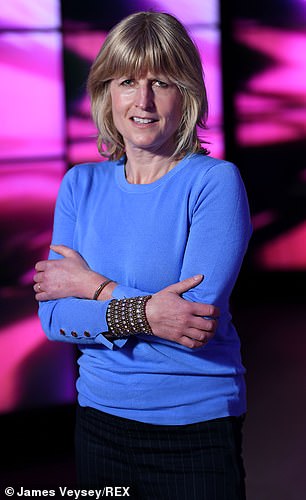 To which Ms Johnson bluntly responded: ‘It was our mother’s funeral yesterday Gina’

But not all social media users showed sympathy for the grieving Prime Minister.

One wrote: ‘I lost my mother aged 21. Was expected back at work 2 days later. He is the PM. He should be there in these times of crisis!’

But others were more forgiving and quickly came to Mr Johnson’s defence. One wrote: ‘Sorry for your loss Rachel. People preach about mental health poor Boris has nearly died became a father and lost his mother and can’t take a break. People should be ashamed.’

And another said: ‘Hope it went well, sorry for your loss.’

Ms Miller’s tweet comes amid mass fuel shortages and a severe lack of delivery drivers that has left supermarket shelves bare across the country.

In the last week BP has been forced to ration fuel and shut stations, while supermarkets warned of food shortages and energy firms have gone bust amid rising gas prices.

The Petrol Retailers Association warned drivers to ‘keep a quarter of a tank’ of fuel in their vehicles in preparation for potential closures of local petrol stations. 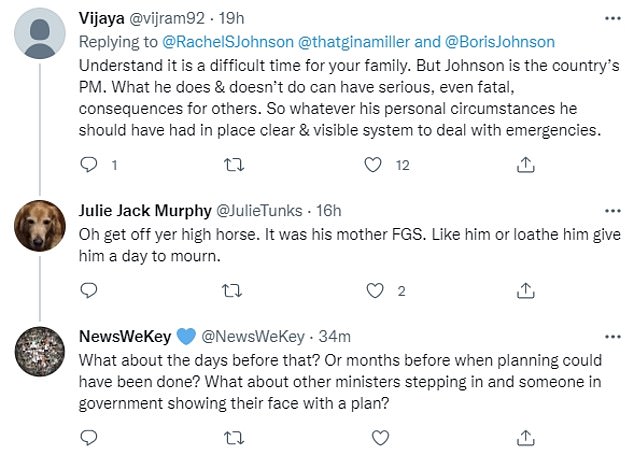 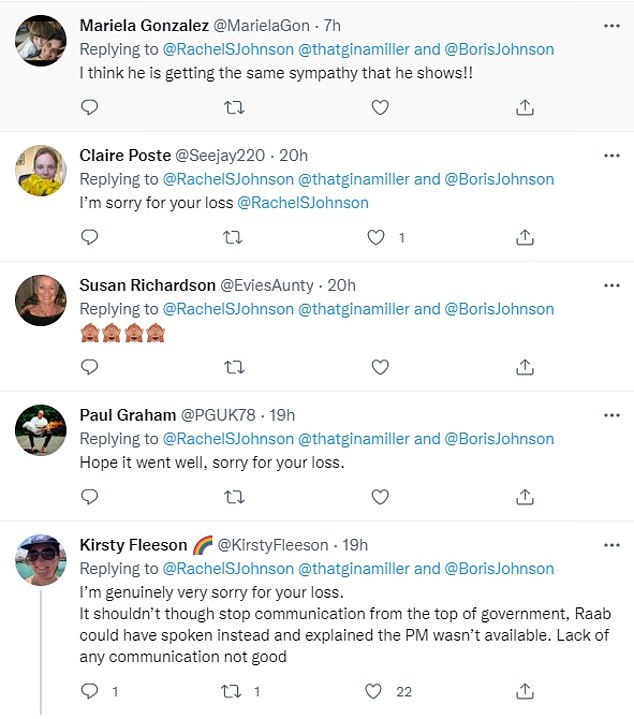 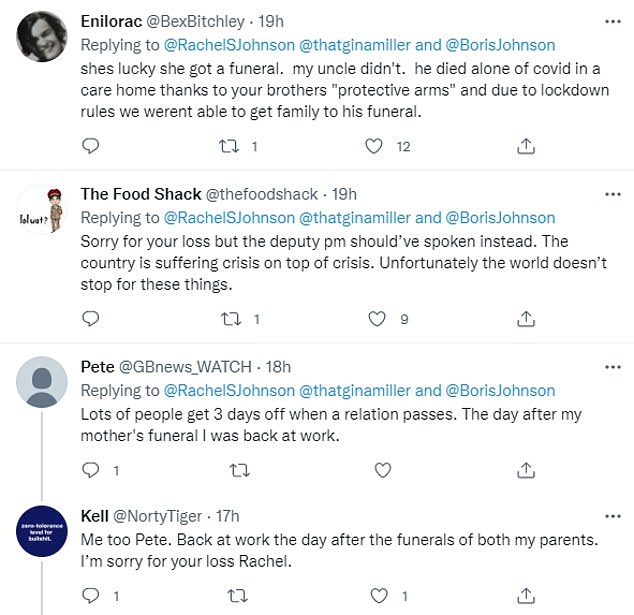 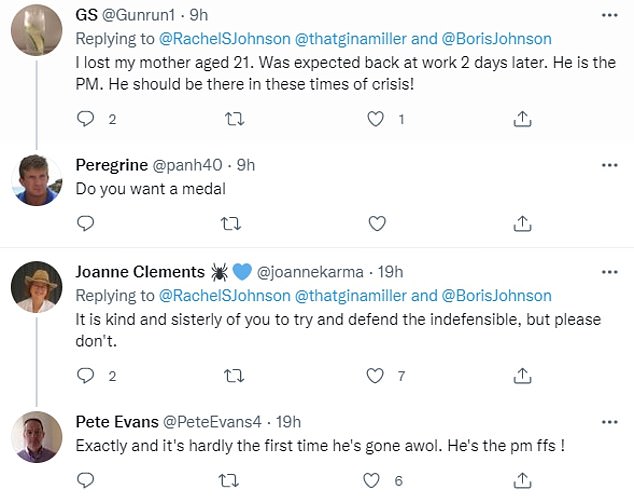 Businesswoman Ms Miller posted her tweet just one day after she announced she was planning to lead the True and Fair party in elections against the Conservatives and Labour.

The campaigner said: ‘This Government needs to be held to account. Voters deserve better than the current politics of incompetence and self-interest.

Ms Miller rose to fame in 2016 with a legal case against the government’s implementation of Brexit that reached the Supreme Court.

The case forced Theresa May to put her decision to invoke Article 50 – to officially leave the EU – before Parliament.

Critics accused the 56-year-old campaigner of attempting to stop Brexit, but she said that she was standing up for Parliamentary democracy.

Ardently pro-EU, it is not known whether Ms Miller’s new party could campaign to rejoin the European Union.

The True and Fair party takes the same name as a campaign she established in 2012 which calls for an end to financial misconduct in the investment and pension industries. The two are however separate entities.

A spokesperson for True and Fair told MailOnline they would make further announcements ‘in due course’ following the party’s expected approval by the Electoral Commission.

Her battles over Brexit made her ‘the most hated woman in Britain’.

But businesswoman Gina Miller has for many become a household name over her involvement in two high-profile court cases on the biggest national question in decades.

Mother-of-three Mrs Miller was born in Guyana to a land-owning family with a mother as the attorney general, but grew up in Britain.

She studied law at the Polytechnic of East London but was unable to finish because her parents wanted her back home. She eventually obtained a degree in marketing and in 2017 an honorary law degree.

Married for the first time at 20, she had disabled daughter Lucy-Ann. Her second husband, she claims, was a drinker who beat her badly (he denies this), forcing her to flee with her daughter. For a time they lived like vagrants, sleeping in her ‘little blue car’ in multistorey car parks in Wiltshire.

She went on to become a successful City investment manager and also set up the No.1 Ladies’ Investment Club for women in business.

Describing herself as a ‘passionate person with a feisty tone of voice’, Mrs Miller says she first took an interest in challenging the Brexit process after discussing with a lawyer her belief that the Prime Minister was not allowed under constitutional law to remove citizens’ rights without parliamentary consent.

In 2016, she challenged the government over its power to trigger article 50 without parliamentary approval. The case went all the way to the Supreme Court, and eventually forced then-PM Theresa May to hold a Commons vote.

After court ruling in her favour in January 2017, she became a hate figure for many Brexiteers, subject to intense vitriol.

The Metropolitan police revealed it had issued eight ‘cease and desist’ notices to people who had sent Miller threatening messages.

Two years afterwards, Gina and her family were still living under security. ‘I was the most hated woman in Britain,’ she said in 2019.

And it was also in 2019 when Mrs Miller returned to the highest court in the land, this time over Boris Johnson’s prorogation of Parliament in an attempt to pass his Brexit bill.

While her initial challenge was dismissed the case was granted an appeal. Following a hearing in Scotland a few days later the case returned to the Supreme Court, where the prorogation was found to be unlawful.

Mrs Miller has stated in various interviews that she was only pressing on with the legal action as a matter of democracy and parliamentary supremacy.

She now has two young children with her third husband and live in a £7million townhouse in Chelsea, West London.