Prisoners and people with severe obesity will be prioritised for COVID-19 vaccination, the federal government has confirmed, as lobbying for spots in the immunity queue heats up.

The government plans to begin vaccination in Australia in March. But with initial supplies likely to be limited, and people able to pay to jump the queue, it may take many months for everyone to receive a jab. 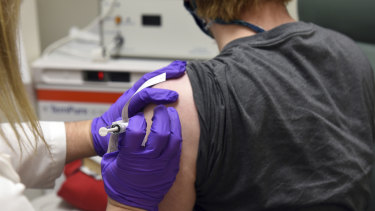 The first patient enrolled in Pfizer’s COVID-19 coronavirus vaccine clinical trial at the University of Maryland School of Medicine in Baltimore.Credit:AP

The government's vaccine policy prioritises people at higher risk of catching the virus, those at higher risk of developing severe COVID-19 and essential workers. They include obvious picks: health and aged-care workers, the elderly and Indigenous Australians.

On Wednesday, a Health Department spokeswoman confirmed the priority list also included prisoners and those in detention facilities, people with diabetes and those with severe obesity.

"The priority populations are being determined by the medical experts," the spokeswoman said. "The advice is consistent with guidance from the World Health Organisation."

But with people allowed to buy their own jabs to beat the queue, there are already concerns about just how fair Australia's vaccination process will be.

“I do worry, if there is great demand and little supply, equity will be one of the things that just slides off to the side,” said Dr Jane Williams, a University of Sydney researcher funded in 2018-19 by the federal Health Department to develop a framework to guide the distribution of limited pandemic vaccine supplies.

“One way of thinking about fairness is everyone having the same access to the same thing. Another is making that thing available to those who need it most. Being able to purchase vaccine privately doesn't do either of those things.”

Science and health explained and analysed with a rigorous focus on the evidence. Examine is a weekly newsletter by science reporter Liam Mannix. Coming soon, sign up now.

The federal government has for months been signalling vaccination campaigns should start in March.

It says Pfizer, the only company with an approved vaccine, has committed to shipping enough doses for 5 million people by early 2021. More than 120 million doses have been lined up from other companies depending on successful clinical trials.

The company told The Age it had committed to 5 million doses in Australia “over the course of 2021”, not “early 2021” as the government has claimed.

Another 3.8 million Australians are aged over 65.

Given that early shortages seem likely, there is certain to be debate on who should come first.

When Canadian health authorities announced they would vaccinate prisoners first during the 2009 H1N1 pandemic, the public uproar was so furious they quickly backed down.

And health recommendations to vaccinate the obese first were ignored, probably due to “anti-obesity bias”, researchers later concluded. 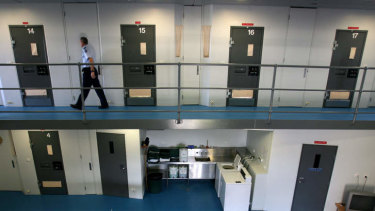 “I think those are reasonable groups to prioritise," Dr Williams said.

"I would hope that if they are talking about prioritising prisoners, they would also be looking at asylum seekers in detention. Those are groups that are at high risk of catching [COVID-19], and probably won’t have great outcomes if they’ve caught it.

“And I don’t think obesity should be treated differently from any other risk factor.”

Vaccine strategies generally fall into two camps: protecting the most vulnerable, or stopping the spread by targeting people most likely to pass the virus on, such as young people.

Australia has clearly plumped for the first strategy, said Professor Julie Leask, a vaccine researcher at the University of Sydney.

That makes sense, because while current data suggests the COVID-19 vaccines effectively stop people getting seriously ill, it is not yet clear if they stop people passing the virus on. We also lack safety data on vaccinating children, and scarce vaccines mean inoculating vast numbers of young people is unfeasible.

Whether the community buys into the strategy is another question. Professor Leask has been calling for months for the government to run a public consultation on who should be vaccinated early.

“That has not happened, unfortunately. We’ll get groups that come up and say ‘we should have access right now’. And they may have a legit case to make.”

In 2019, Dr Chris Degeling, a senior fellow at the Australian Centre for Health Engagement, Evidence and Values, ran citizens' juries to decide how vaccines should be allocated in an influenza pandemic.

Generally, if there was sufficient vaccine to protect healthcare workers and Indigenous Australians, people preferred giving the rest to people most likely to pass the virus on, and giving the vaccine to children, over targeting those most at risk, because they would be indirectly protected.

Such a strategy for COVID-19 would probably mean targeting young people, rather than the elderly. Nearly a third of Australia's confirmed cases have been in people aged between 20 and 34, compared with just 11 per cent in those aged over 65.

“It’s this idea of fairness,” Dr Degeling said. “More people benefit from the resources that are available, rather than the people who are most at risk. If you can spread that benefit across a larger group in society, why wouldn’t you?”

Catch all the day’s headlines

At the end of each day, we’ll send you the most important breaking news headlines, evening entertainment ideas and a long read to enjoy.  Sign up to The Sydney Morning Herald’s newsletter here, The Age’s here, Brisbane Times’ here, and WAtoday’s here.