Premier Daniel Andrews says he will ask Victoria Police why mask-wearing was not enforced at Melbourne's beaches where at least one illegal dance party was held over the weekend.

Dozens of people – most not wearing masks or social distancing – were filmed at a beach party at Half Moon Bay at Black Rock on Sunday night, before police broke up the gathering. 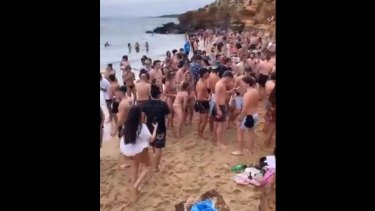 Victoria Police refused to confirm on Monday whether anyone at the party had been fined for not wearing face masks, or breaching current COVID-19 restrictions that limit outdoor gatherings to no more than 10 people, despite providing daily updates about fines issued during the height of state's second coronavirus wave.

A Victoria Police spokeswoman said the group dispersed without incident.

Later in the evening, a large police contingent patrolled St Kilda beach where scores of maskless young people lingered late into the night as the mercury remained around 30 degrees.

While arguments about the need to wear masks continue at a government level, police patrols have become increasingly visible around St Kilda beach as Melbourne's weather warms up. 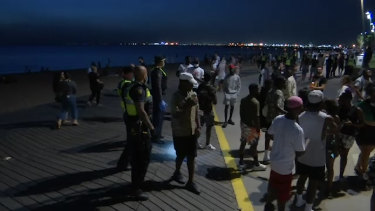 "I don't think anyone should go out and expect that they can just flout the rules, do the wrong thing, be selfish and won't pay a significant price," Mr Andrews told reporters on Monday.

When asked why police were not issuing fines to people not wearing face masks at the beach, the Premier said he would follow up with the force.

"I'd need to speak to police about the circumstances of that but it's not my practice to interfere in the work that Victoria Police do. They'll make judgments, they're often far better briefed on these matters and the circumstances and the dynamics than any of us are.

"I'm not in the habit of second-guessing them."

St Kilda was the scene of an illegal gathering on Saturday night, where people danced in Acland Street. Again, most revellers were not wearing face masks when police arrived to break up the party.

Large gatherings at Melbourne beaches have drawn the ire of ministers and health authorities in the wake of the city's tough stage four lockdown when people were barred from going outside after 8pm, or travelling more than five kilometres from their homes.

Associate Professor Euan Tovey, a respiratory virus researcher at the University of Sydney, has previously told The Age that there was little support for fears about transmission at the beach.

Mr Andrews has so far remained steadfast on mandatory face masks rules, which require Victorians to wear masks outside their homes at all times, even while at a park or the beach.

But after the state recorded its 17th day without a new COVID case on Monday, the Premier said some changes to mask rules would be announced this Sunday.

Meanwhile, police are still searching for a young woman who punched a police officer in the head during a fight of up to 20 people on the St Kilda foreshore last week. 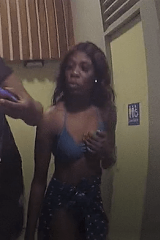 Victoria Police are seeking this woman’s identity after a police officer was assaulted at St Kilda on Sunday night.Credit:Victoria Police

Police were patrolling the beach on Wednesday night when a fight broke out between 15-20 people just before midnight.

Capsicum spray was used to break up the brawl when a group of young women and teenagers "became abusive and refused to move on".

One young woman allegedly punched a male police officer in the head during the scuffle. She was capsicum sprayed and ran away, while the officer was treated for minor facial injuries.

Police have released an image from bodycam footage of a young woman they wish to speak to.

Anyone who has information is urged to contact Crime Stoppers on 1800 333 000 or submit a confidential crime report at www.crimestoppersvic.com.au.