Premier Daniel Andrews’ medical treatment team are set to reconsider whether to proceed with surgery following his “very nasty injury” to his ribs and spine this week.

Mr Andrews broke several ribs and damaged a vertebra when he landed on his back after a fall down wet, slippery stairs at a holiday home on the Mornington Peninsula on Tuesday. 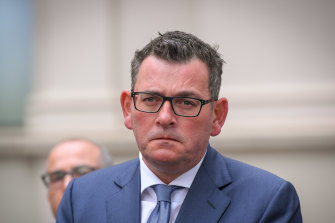 Premier Daniel Andrews was taken to The Alfred hospital on Tuesday.Credit:Eddie Jim

He is currently recovering in a specialist trauma centre at The Alfred hospital.

Health Minister Martin Foley said on Friday that Mr Andrews’ medical treatment team would reassess his need for surgery again over the weekend.

“That will be a decision for the world-class team at The Alfred, in conversation with Daniel and his family, and I understand they’ll review that over the weekend,” he told ABC Melbourne.

Mr Foley said he was told on Thursday night that Mr Andrews was “up and about”, moving and walking.

A government source who spoke on condition of anonymity on Thursday said there was still more than a 50 per cent chance Mr Andrews would need surgery.

“It certainly isn’t just a little slip that’s happened, and you have to be very careful with anything to do with the back or the spine,” Mr Albanese said.

“I have texted Daniel, but obviously his priority at the moment isn’t communication, it’s just getting well.”

Mr Albanese said he was “not at all” worried about the leadership stability of the Labor Party in Victoria, and said Mr Andrews would undoubtedly return as Premier.

The pair lived together in Canberra shortly after Mr Albanese’s election to parliament, when Mr Andrews was working in the city as a political staffer.

“Everyone is concerned, I think, for Daniel’s health,” he said. “This isn’t a political issue, this is a health issue.

“I look forward to not only him returning, but him contesting and being elected for another term.”