Hundreds of people took part in opposing rallies in Portland on Sunday to mark the one-year anniversary of a major clashes in the city and led to new violence and a nearby shooting that may be tied to the unrest.

A right-wing rally called “Summer of Love: Patriots Spreading Love not Hate” took place in a parking lot of a former Kmart and drew about 100 people. Tension increased when a van attempted to drive in, but crashed, KOIN-TV reported. There were “splinter groups” from left-wing counter-protests who confronted the right-wing group and the situation deteriorated at about 4 p.m., OregonLive.com reported. The report said both sides were armed with “bats, paintball guns and wooden spears.” 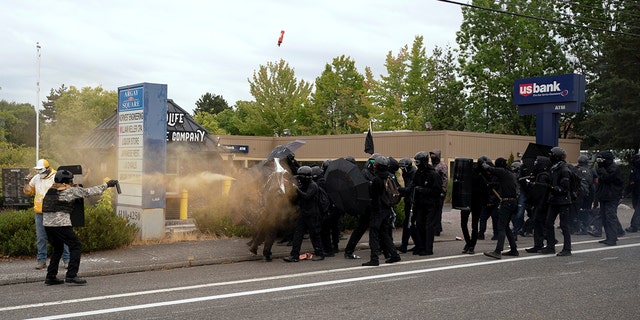 “People were lighting fireworks and dispersing chemical spray, as well as firing what appeared to be paintball and/or airsoft guns,” police said in a statement. “Some property destruction was observed.”

The paper reported that city police took a “mostly hands-off approach” to the clashes.