Police will focus on referring drug users to support services and showing them and their families compassion as part of a new five-year strategy to treat addiction as a health rather than an enforcement issue.

Victoria Police plans to expand its drug-diversion program and will look to trial international treatment and support schemes as part of the strategy, which looks beyond enforcement in tackling addiction issues.

Officers will be encouraged to show more "compassion and empathy towards individuals who use drugs and their families" and connect more people to support services to seek help for their addiction and stay out of the criminal justice system. 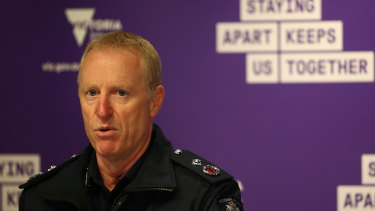 Deputy Commissioner Rick Nugent said the 2020-2025 strategy, to be released by Victoria Police on Thursday, reflected a contemporary approach to drug policing and recognised individual drug problems are first and foremost health issues.

“We're just looking at opportunities to enhance our diversion and referral processes … for those that make the certain criteria, how do we support that, to prevent them moving into a life of crime?"

Mr Nugent, who travelled internationally with a parliamentary committee several years ago to learn about drug policy overseas, said Victoria Police was also looking to learn from innovative programs being rolled out in places like Portugal.

“We want to explore what those opportunities are and if there's something we could introduce here, or even trial here or pilot here, that'd be something we'd love to do," he said.

Mr Nugent said officers on the ground were constantly dealing with crime caused by drugs and were aware that more needed to be done to tackle the root of the problem.

“They see that harm every day. And because they see the harm they also see that there's more needed than just arresting people and putting them back in jail all the time," he said.

“That's not to say that people who commit violent crimes and serious crimes shouldn't go to jail, that's a matter for the courts, but they also acknowledge and see that more is also needed to help.

"That person with that addiction is going to continue to be involved in the criminal justice system whilst they continue to live the lifestyle they have and take the drugs that they're taking."

The strategy focuses on four key areas of prevention, disruption and supply reduction, treatment and support, and harm reduction.

They aim to tackle the changing ways dealers are trafficking drugs, with police finding that encrypted networks and cryptocurrencies are facilitating illegal transaction and are making it harder to trace criminal activity.

The types of drugs circulating in the community are also changing, with a re-emergence of heroin overdoses in the metro areas of Victoria, and the introduction of different synthetic drugs.

Police are developing an "action plan" which will detail how the strategy will be implemented. It will suggest that dedicated drug detectives are used in metro and regional Victoria.

The chief executive of Victorian Alcohol and Drug Association, Sam Biondo, said the release of the strategy was an opportunity for much-needed change but urged police to consult with the sector.

"I think they've come to the realisation that the war on drugs has failed and also the fact they play pivotal role in finding a better means for dealing with people’s substance misuse issues," he said.

"It's very important for police to recognise for many people, an overwhelmingly large proportion of people, what we are looking at is a health problem," he said. "It should be in the realms of health treatment where the solution lies, not in the realm of criminal justice."

"I think from a community-sector point of view we would welcome the opportunity to engage with Victoria Police about how we can make such a policy work."