One shot of AstraZeneca or Pfizer has almost no effect against the Delta virus mutation spreading rapidly around the world, but new French research finds that two jabs provide strong protection.

In laboratory tests, blood from several dozen people given their first dose of the Pfizer or AstraZeneca vaccines “barely inhibited” the Delta variant, the team reported . But weeks after getting their second dose, nearly all had what researchers deemed an immune boost strong enough to neutralise the infection — even if it proved a little less potent than against earlier versions of the virus. 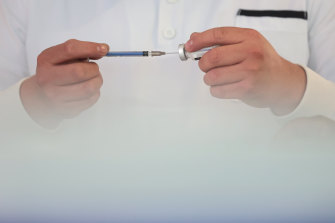 A nurse prepares a syringe with doses of the COVID-19 AstraZeneca vaccine.Credit:Getty

The French researchers also tested unvaccinated people who had survived a bout of the coronavirus, and found their antibodies were four-fold less potent against the new mutant. But a single vaccine dose dramatically boosted their antibody levels — sparking cross-protection against the delta variant and two other mutants.

Discovered during India’s wildfire outbreak earlier this year, Delta is estimated to be 60 per cent more infectious than Alpha, the variant that overwhelmed Britain over the new year, and roughly twice as infectious as the original virus first identified in Wuhan, China, in January 2020.

The Washington Post reported separate findings from The New England Journal of Medicine that suggests the Delta variant is less susceptible to neutralisation by the antibodies generated by patients who had recovered from COVID and could re-infect those who had already endured the disease.

Delta infections are surging through populations with low vaccination rates. Dr Rochelle Walensky, director of the US Centres for Disease Control and Prevention, said that’s leading to “two truths” — highly immunised swathes of America are getting back to normal while hospitalisation is rising in other places.

“This rapid rise is troubling,” she said: A few weeks ago, Delta accounted for just over a quarter of new US cases, but it now accounts for just over 50 per cent — and in some places, such as parts of the Midwest, as much as 80 per cent.

The lab experiments add to real-world data that the mutations aren’t evading the vaccines most widely used in Western countries, but underscore that it’s crucial to get more of the world immunised before the virus evolves even more.

Researchers in Britain found two doses of the Pfizer vaccine, for example, are 96 per cent protective against hospitalisation with the Delta variant and 88 per cent effective against symptomatic infection. That finding was echoed last weekend by Canadian researchers, while a report from Israel suggested protection against mild delta infection may have dipped lower, to 64 per cent.