No EFL team will be allowed to go bust because of the coronavirus crisis, says Culture Secretary Oliver Dowden as he slams Liverpool and Manchester United’s ‘power grab’

Oliver Dowden today said no English Football League team will be allowed to go bust because of the coronavirus crisis.

The Culture Secretary renewed his calls for the Premier League and EFL to strike a bailout deal which would see the richest teams in England using their wealth to keep clubs in the lower divisions afloat.

Negotiations have been rumbling on for weeks but no agreement has been reached, with ministers growing increasingly impatient.

Mr Dowden said he had ‘received assurances’ from both leagues that clubs will not be allowed to collapse as many struggle to balance the books without crowds.

He said the Premier League has the ‘resources to stop that happening’ as he urged both sides to ‘get this deal over the line’.

The Culture Secretary also called on BT Sport to make this weekend’s Merseyside derby between Liverpool and Everton free-to-air.

It came after MPs suggested the game could act as an ‘invitation’ for people to break the tough lockdown rules now in place across the city which have seen pubs closed and a ban on household mixing. 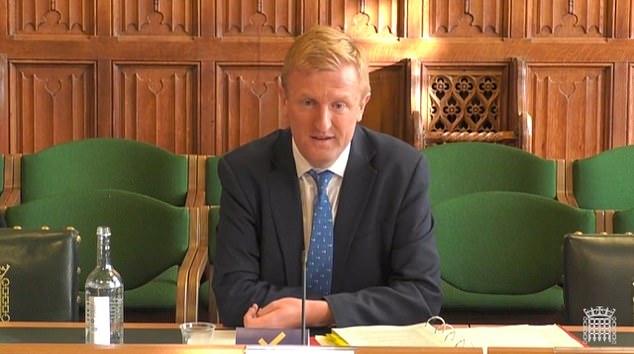 It emerged in recent days that leading Premier League teams are pushing plans called Project Big Picture to overhaul the top division and its relationship with the EFL.

Under the proposed changes the top flight would be reduced from 20 to 18 teams, the Carabao Cup would be scrapped and there would be a new financial settlement for the lower divisions.

Mr Dowden expressed a dim view of the proposals this morning as he gave evidence to the Digital, Culture, Media and Sport Select Committee and called for the Premier League and EFL to focus on agreeing a coronavirus bailout instead.

He said: ‘I have made clear my deep scepticism and concern about this, both in terms of the provisions itself where it seems to tend towards a closed shop for effectively the six most powerful clubs in the Premier League… but I think more importantly for government right now there is a problem in football which football is perfectly capable of resolving itself whereby the Premier League and the EFL just need to get together and do this deal.

‘We know that, from conversations I have had, EFL clubs will not be allowed to go bust. The resource is there.

‘But we need a comprehensive deal and I think this is a distraction at best from that and I think what it demonstrates is that we were wise to put in our manifesto provisions for a fan led review because it genuinely brings into question the ability of football to govern itself properly.’

Mr Dowden said the Premier League and EFL needed to ‘get this deal over the line’, with the former using its wealth to ‘support the wider football family’.

Pushed on his claim that no EFL team will be allowed to go bust, Mr Dowden said: ‘Those are the conversations I have had with the EFL and the Premier League.

‘I have received assurances that they would not allow that to happen. They have the resources to stop that happening.’

Project Big Picture discussions have been led by Liverpool and Manchester United and became public knowledge on Sunday.

Mr Dowden agreed with the assessment of MPs that the proposals represented an attempted ‘power grab’ by big clubs.

‘I would have preferred that at the end of this that, rather than reading about this Project Power Grab as you rightly put it, instead I was reading how they had come to a deal to secure the future of football, I think that would be a much better use of people’s time,’ he said.

The Government is adamant that the Premier League should fund the bailout of the lower divisions, especially after top clubs spent more than £1 billion in the most recent transfer window.

Mr Dowden told the committee: ‘Given there is that much money in football could we seriously turn around to a pensioner in Hartlepool and say that some of her taxes would have to go to support this?’

The Culture Secretary also backed calls from MPs for BT Sport to make the Merseyside derby free-to-air after the city was put into the ‘very high’ coronavirus lockdown tier.

MPs suggested the game could act as an ‘invitation to people to break the lockdown rules’ because fans who do not have a BT Sport subscription could be tempted to meet at the house of a friend who does.

‘But if BT were able to do that as a gesture that would be a great thing to do of course.’