Three police officers in Ohio are being hailed as heroes after resuscitating a missing child who was found unresponsive and floating in a pond on Saturday, authorities said.

The 4-year-old boy had been reported missing from a family member’s house in Painesville around 7:40 a.m., Painesville police said in a statement. As police searched the area for the child, they were alerted at 8:12 a.m. to a 911 call about a body floating in the fishing pond at Painesville’s Recreation Park.

Officer Daniel Thompson and Sgt. Matthew Tycast could not see the child at first due to debris covering his body, but eventually spotted air bubbles and the boy’s silhouette about 20 feet from the bank, the department said.

As the two officers jumped in the water to rescue the child, Officer Chad Balausky retrieved a throw rope for safety.

The department released startling video of the rescue and the officers’ frantic efforts to revive the child.

Police said the boy was brought to shore but he did not appear to be breathing. Thompson quickly began CPR while Tycast worked to clear the child’s airway. Once the child began breathing, Tycast moved him into a position to help expel excess water he had swallowed.

The Painesville City Fire Department arrived at the scene to help treat the child before he was taken to a hospital, where he was treated and was in stable condition. 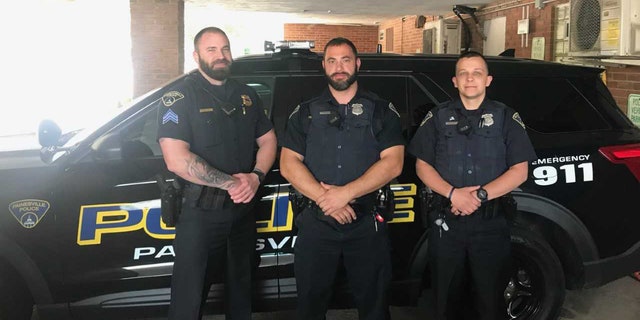 Sgt Matthew Tycast, left, and Officers Daniel Thompson and Chad Balausky were hailed as heroes for their efforts to save the unresponsive child.
(Painesville Police Department)

“The Painesville Police Department is proud of the responding officers for their courageous actions and lifesaving efforts,” the department said. “We sincerely hope the child has a full and speedy recovery.”

While the incident is being investigated, police said it was believed the child had exited the family member’s home through a sliding backdoor and made his way into the park through a closed rear exit.