New York: As investigators seek to identify rioters who stormed the US Capitol, police departments in Virginia and Washington state have placed officers on leave as authorities examine whether they took part in unlawful acts while off-duty.

Fire departments in Florida and New York City have also said they reported to federal authorities allegations that some of their members may have been present when the mob broke into the Capitol as Congress met to certify the results of the November 3 presidential election. 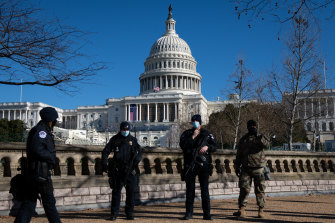 The police department in the small town of Rocky Mount, Virginia, said on Sunday, US time, it had placed two officers on administrative leave after it learned they attended an "event" in Washington, DC on the day of the riot while off-duty.

"The Town of Rocky Mount fully supports all lawful expressions of freedom of speech and assembly by its employees but does not condone the unlawful acts that occurred that day," the department said in a statement, saying it had notified federal authorities.

Five people lost their lives, including a Capitol Hill police officer, when supporters of President Donald Trump stormed the Capitol in an attempt to disrupt the formal recognition of Trump's election loss to Democrat Joe Biden. 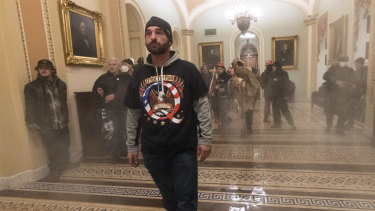 Smoke fills the walkway outside the Senate Chamber as rioters storm the Capitol. Credit: AP

Dozens of people have been criminally charged, and the FBI has sought help from the public to identify more participants.

Seattle's police department (SPD) said it also placed two officers on administrative leave while an investigation takes place into any role they may have played in the chaos that unfolded on the other side of the country.

"If any SPD officers were directly involved in the insurrection at the US Capitol, I will immediately terminate them," the department's interim chief, Adrian Diaz, said in a statement.

The New York City Fire Department said it provided information to the FBI after receiving "anonymous allegations" that some of its members, active or retired, were present during the rioting in the nation's capital.

And in Florida the Sanford Fire Department said it placed one of its firefighters on administrative leave and was investigating after a photo and video emerged online that appeared to show him among the mob.

On Saturday a top Democratic lawmaker said the Capitol was a crime scene and urged mobile carriers and social media companies to preserve all data related to the rampage.