It was the most important time Angry Anderson had ever stepped up to a microphone.

On Tuesday, the Rose Tattoo frontman walked into the middle of a courtroom in Sydney, put on his glasses, and held a four-page statement in shaking hands, his voice heavy with emotion as he prepared to speak about his youngest son. 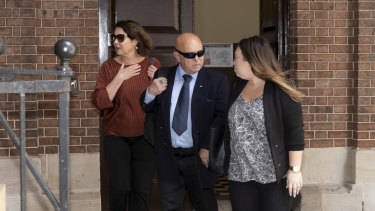 Angry Anderson leaves court with his supporters on Tuesday.Credit:Brook Mitchell

Liam Anderson, 26, was bashed to death by his friend Mathew Flame, 22, at a reserve in Sydney's northern beaches in the early hours of November 4, 2018.

Flame had taken eight to 10 MDMA capsules on a night out and was experiencing a drug-induced psychosis which led him to believe his friend was a demon who wanted to kill him. He was found guilty of manslaughter in November following a three-week trial.

Gary "Angry" Anderson told a NSW Supreme Court sentence hearing that he will never forget the moment his eldest son Galen told him about Liam's death, and his family's life "changed forever – torn apart, never to be repaired, never to be the same again". 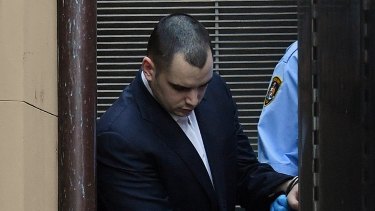 Mathew Flame is led away from court during his trial.Credit:Kate Geraghty

"As his father I will never be able to forget the sound of his voice," Mr Anderson said. "'Dad, something terrible has happened, someone has killed Liam'.

"These few words, these few terrible words, reverberate in my head daily and will, I imagine, for the rest of my days.

"Later as we clung to one another as my grief washed over me, I knew with total certainty that we would be bound together forever in our grief."

Flame, who sat in the court dock, bowed his head. 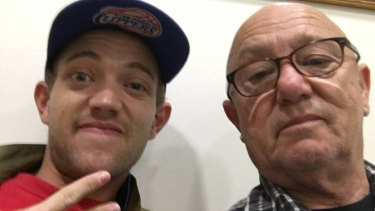 Mr Anderson said his eldest son was sobbing hysterically, wracked with convulsions, and told him: "We don’t deserve this life, this new life, I hate it and I hate he who has forced it on us."

The rocker said Liam will never again walk through the door bringing his "amazing warmth and love", or take part in everyday domestic occurrences like having breakfast, feeding his dog, or bringing down his washing.

"I am forever denied every simple pleasure of being his dad," Mr Anderson said. "He will always be in our hearts, but we are denied the sound of his laughter, his smile, the light in his eyes, his unique sense of humour … sadness now is our constant companion.

"I am condemned, as we all are, to a life of sadness."

Mr Anderson said when his son "left this mortal plain, he took part of me with him".

"I am missing that piece, I’m no longer whole. When he died part of me died with him," Mr Anderson said.

"The last morning of his life, Liam’s heart was full of light, a light that came from deep within him, a light that was his life force, a life that was Liam. That life was snuffed out by darkness."

Mr Anderson said he believes with every fibre of his being that drugs did not cause that darkness but "set it free".

Liam's mother Lindy Anderson cried as she told the court she woke on the morning of her son's death in "an absolute state of panic to the point I thought I was having a heart attack", then turned on the TV to see a young man had been beaten to death.

She said she approached Flame in court and told him she forgave him for her own selfish reasons, but forgiveness doesn't mean she accepts his wrongdoing.

"Forgiveness for me, as Liam’s mother, is to find peace in life," Mrs Anderson said. "I will not hold onto the poison of anger which will only eat me away and make me sick."