For more than 60 years, generations of the Porter family have spent each summer camping on the foreshore at Rosebud, on the Mornington Peninsula.

But this year, says Mervel Porter – whose husband Graham's grandmother used to camp in a military tent – the family won't be spending Christmas under canvas. 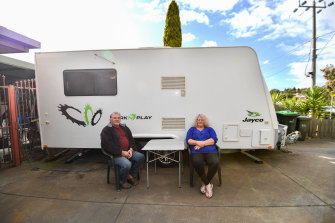 Graham and Mervel Porter have been regulars at the Rosebud campsite.Credit:Joe Armao

Amid fears that a coronavirus outbreak would spread quickly among campers, the Mornington Peninsula Shire will keep three of its council-managed camping grounds closed until February, in a major blow to local businesses.

The council's campsites are in Rye, Rosebud and Sorrento. Other camping grounds, operated by committees of management, are expected to reopen in December this year.

The decision has come as a huge disappointment for the peninsula's tourism industry, which is bracing for a busy summer to recoup some of its losses during the pandemic.

The state government has said it will scrap travel restrictions for Melburnians on Sunday. 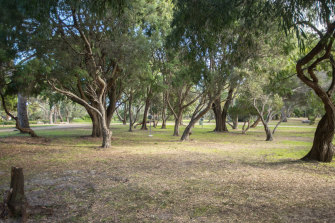 There had been hopes that the Rosebud camping ground – which has been closed for much of the year – would open up in time for Christmas.Credit:Simon Schluter

Last month Health Minister Martin Foley said the 25-kilometre travel restriction on movement had been put in place to protect popular holiday and day trip destination within greater Melbourne – including the Mornington Peninsula and Yarra Valley.

The council's decision to close its campsites came after it conducted a risk assessment and decided it was not safe to proceed.

Mornington Peninsula chief executive John Baker said the shared facilities at the camping grounds were among the biggest worries.

“One of our major concerns is the transmission risk from people having to use the shared toilet and shower amenity blocks," he said.

Mr Baker said the council was disappointed the camping season had been postponed but it was necessary to keep visitors and the community safe.

The Greater Geelong council, by comparison, will allow camping at the site it manages in Breamlea.

Environment Minister Lily D'Ambrosio told reporters the Mornington Peninsula had made the call that they were unable to comply with Chief Health Officer Brett Sutton's advice on permissible camping on public land.

"We will continue to encourage the Mornington Peninsula Shire to talk with the Chief Health Officer and his team to work through ways of seeing whether they are able to allow some limited amount of camping on their public grounds," she said.

Mornington Peninsula Regional Tourism Board chair Tracey Cooper said many businesses in places such as Rye relied heavily on a busy camping season to keep their businesses afloat. 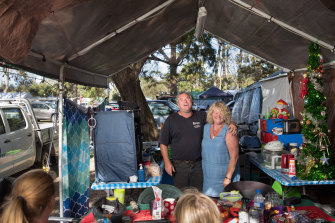 "To stop it all before the end of January doesn't seem proportionate to the risk as long as you can manage the risk in the shared facilities," she said.

The Porter family are regulars at the Capel Sound camping ground where they have loved spending Christmas with their family. But they have taken a "lay off" this year amid concerns about coronavirus and will instead spend summer in Noojee.

"I think the way this year has gone it was probably the only decision we could make," Ms Porter said. "Safety has to come first."

Capel Sound Foreshore manager Wayne Nicholls said he expected to open the camping ground on December 19 but that would depend on advice from the Health Department.

"We're just wanting to understand what issues or complexities or restrictions are in place that would prevent us from providing a safe experience for the public," he said.

The Whitecliffs to Camerons Bight Foreshore camping ground is also expected to reopen on December 19. Foreshore manager Greg Powell said the opening date was being reviewed regularly to ensure it was consistent with the latest advice.

"Our priority is to make sure we do the utmost to protect the public from a health perspective," he said.

Get our Coronavirus Update newsletter for the day’s crucial developments and the numbers you need to know. Sign up to The Sydney Morning Herald’s newsletter here and The Age’s here.