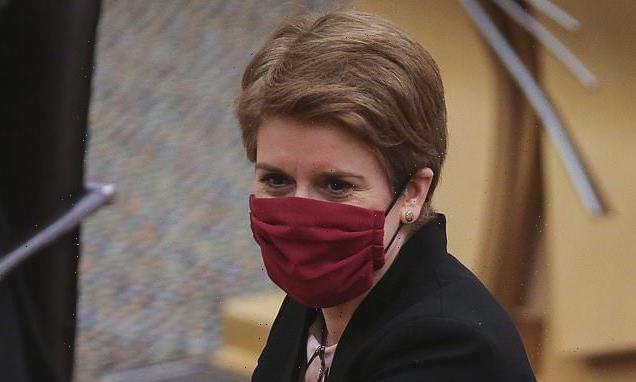 Nicola Sturgeon’s plan to hold an independence referendum without consent from Westminster could be ‘torpedoed’ by a Supreme Court ruling in London yesterday.

Scotland’s first minister was dealt the humiliating blow when the United Kingdom’s highest court ruled that her government had overstepped its powers.

Experts described the judgment as ‘unprecedented’, amid a scathing attack by the judges – including the court’s Scottish president Lord Reed – on the ‘deliberate’ attempt to bypass UK Parliamentary sovereignty. 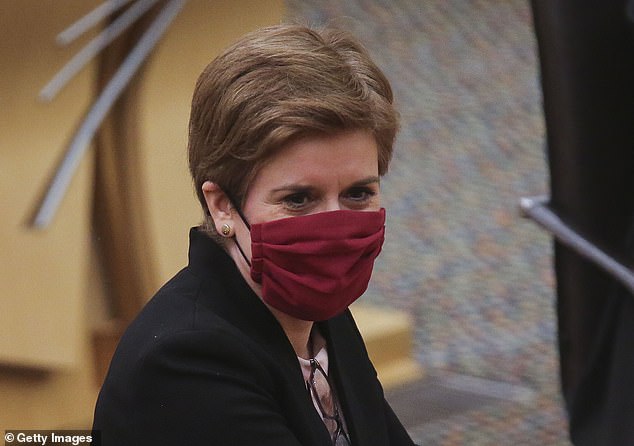 Five senior judges, including Reed, unanimously found that two Bills passed in March by MSPs were incompatible with the 1998 Scotland Act, which is the basis for Scottish devolution.

They identified four sections of the United Nations Convention on the Rights of the Child (UNCRC) Bill and two sections of the European Charter of Local Self Government Bill which were incompatible with Holyrood’s powers.

The two Bills are now expected to return to Holyrood to be changed by MSPs in a ‘reconsideration stage’ to meet the requirements of the court’s judgment.

However, Professor Adam Tomkins of Glasgow University and a former Tory MSP, told The Daily Telegraph that the ruling ‘may well prove to torpedo any argument that Holyrood can legislate’ for a second referendum without Westminster’s consent.

‘It is a ruling that harms any Nationalist conceit that there could ever be a path to a lawful independence referendum without Westminster’s explicit consent,’ he said.

Opponents claimed the ‘nationalist games’ had backfired and paved the way for another defeat in court if Boris Johnson refuses to agree to a divisive vote. 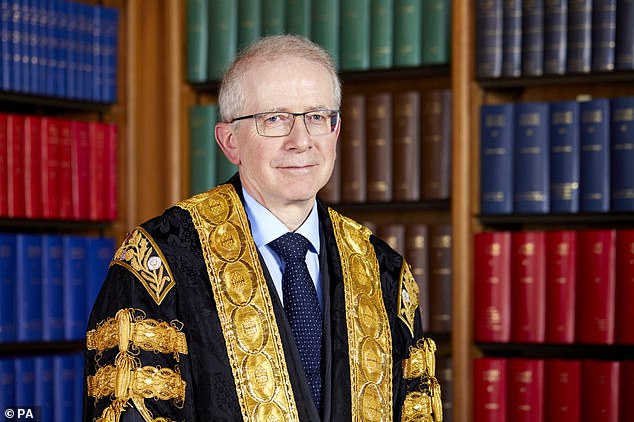 Experts described the judgment as ‘unprecedented’, amid a scathing attack by the judges – including the court’s Scottish president Lord Reed (pictured) – on the ‘deliberate’ attempt to bypass UK Parliamentary sovereignty

Deputy First Minister John Swinney said he was ‘bitterly disappointed’ with the ruling, claiming it showed Scotland was in a ‘ludicrous’ constitutional position.

UK law officers had referred both Bills to the Supreme Court for a definitive ruling on competence, arguing both Bills ‘would bestow upon the Scottish courts extensive powers to interpret and scrutinise primary legislation passed by the sovereign UK Parliament’.

This is because it would modify Section 28(7) of the Scotland Act 1998, which states Holyrood’s power to make laws ‘does not affect the power of the Parliament of the United Kingdom to make laws for Scotland’.

Lord Reed said that while the Scottish parliament can make laws for Scotland, it ‘does not enjoy the sovereignty of the Crown in Parliament’.

He added: ‘Parliament also has an unlimited power to make laws for Scotland, a power which the legislation of the Scottish parliament cannot affect.’ 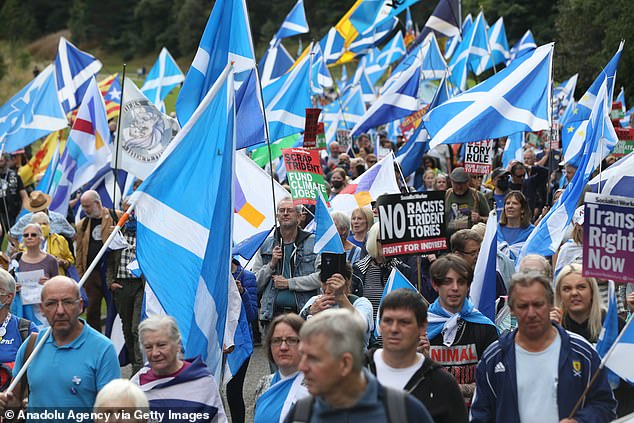 Pictured: Pro-independence demonstrators stage a rally in Scottish capital Edinburgh on September 25, 2021 in favor of independence from the UK

Supreme Court rules two Bills are beyond Holyrood’s powers: What happens next?

Yesterday, the Supreme Court ruled that two Bills brought forward by Nicola Sturgeon’s government were beyond Holyrood’s powers. The judgment sparked a constitutional row in Scotland. Here, RACHEL WATSON of the Scottish Daily Mail explains what has happened and what it means.

What are the Bills and when were they passed?

In March, MSPs unanimously voted to pass the United Nations Convention on the Rights of the Child (UNCRC) Bill and the European Charter of Local Self Government Bill.

The UNCRC Bill would have set a legal requirement for public authorities to comply with international standards.

Why did the UK Government challenge this in court?

In April, Scottish Secretary Alister Jack wrote to the Scottish Government warning that concerns over competency of the Bills had been raised ‘several times at official level’. He also suggested amendments could be made to address this. The changes were not made, so UK law officers sought an opinion from the Supreme Court on whether this would interfere with powers reserved to Westminster.

What did the Supreme Court rule?

Five judges at the Supreme Court ruled that certain sections of the UNCRC Bill and the European Charter of Local Self Government Bill were outwith Holyrood’s competency and were incompatible with the 1998 Scotland Act.

This is because they would breach part of the Act, which allows the UK Government to make laws for Scotland.

On the UNCRC, it stated that there was an implication that this had been ‘drafted in terms which deliberately exceed the legislative competence of the Scottish parliament’.

The Bills will now return to the Scottish parliament for amendments to be made before they are passed into law officially.

Why is there a constitutional row?

The judgment has opened a more fundamental argument on devolution and when decisions can be made by the Scottish Government.

There are some who see the court battle as a test run should Nicola Sturgeon bring forward a Referendums Bill in Holyrood in an attempt to hold a referendum without Boris Johnson’s permission.

According to the SNP, the judgment is proof that Scotland does not have the ability to legislate in areas it should.

But, on the pro-Union side, there is belief that the ruling may shoot down Miss Sturgeon’s bid for a divisive vote.

The United Nations Convention on the Rights of the Child (Incorporation) (Scotland) Bill sought to enshrine the protections on children’s rights into Scots law, while a similar piece of legislation – also passed unanimously by MSPs – was brought in to incorporate the European Charter of Local Self-Government.

Supreme Court justices insisted they did not take issue with the Scottish Parliament’s decision to incorporate these sets of standards – but that the manner in which the Bills had sought to do this ‘breaches the limitations imposed on the legislative competence of the Scottish Parliament by the Scotland Act’.

However, Mr Swinney said the unanimous ruling from the Supreme Court made ‘crystal clear’ that ‘the devolution settlement does not give Scotland the powers it needs’.

‘While we fully respect the court’s judgment, it lays bare the weakness of, and the limits in, the devolution settlement,’ he said.

‘The ruling means it is outwith the power of the Scottish Parliament to pass legislation it considers necessary to fully ensure the rights of Scotland’s children are protected.

‘The UNCRC Bill was created to deliver a revolution in children’s rights, making sure children and young people are involved in decisions that affect their lives. The Bill was backed unanimously by the Scottish Parliament and celebrated as a landmark by campaigners across the country.’

He added that the European Charter of Local Self-Government Bill – which had been introduced by former Green MSP Andy Wightman – was supported by councils as it ‘strengthens local government by incorporating the Charter into Scots law’.

The Deputy First Minister, who will give a statement to Holyrood on the ruling later on Wednesday, said the judgment will ‘require careful consideration’.

Taking to Twitter, First Minister Nicola Sturgeon said the ruling will ‘leave us unable to fully protect children’s rights, even in devolved areas’.

‘If our Parliament was independent, no such restriction would apply.’

Speaking about the legislation on incorporating the UN Convention on Children’s Rights, constitution spokesman Donald Cameron said: ‘There was never any dispute over the substance of the policy, only the legality of parts of the Bill.

‘The Scottish Conservatives supported this legislation from the outset whilst pointing out the legal problems.

‘But the SNP sought to politicise it from the very beginning. They cynically engineered and manipulated the timing of the Bill to facilitate a pre-election stunt where they provoked a grievance with the UK Government.’

The Conservative MSP also argued that the ‘instant response’ of the Deputy First Minister ‘was to make it all about nationalism, instead of focusing on children’s rights’.

‘The SNP’s disgraceful approach has delayed a Bill on children’s rights that every party in the Scottish Parliament supported,’ he said.

‘We hope they will now hastily apologise for doing so and make the necessary changes immediately so that this legislation, that all MSPs support, can be passed.’ 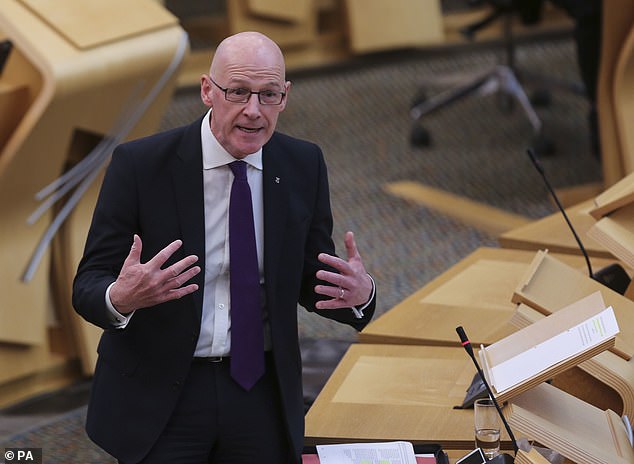 Deputy First Minister John Swinney makes a statement at the Scottish Parliament, Wednesday, where he said work on a Bill to incorporate a UN treaty on children’s rights into Scots law will continue despite the original being sent back to Holyrood by the UK Supreme Court

Scotland’s Children and Young People’s Commissioner, Bruce Adamson, said the Scottish Government’s commitment to protecting children must not be dampened by the ruling.

‘The Supreme Court has today clarified the limits of the powers of the Scottish Parliament, but this must not limit the commitment made by the Scottish Government to take a maximalist approach to the incorporation of children’s rights as far as devolution allows,’ he said.

Alison Evison, president of local authority umbrella body Cosla, said: ‘We will now seek to work with the Scottish Parliament and the Scottish Government to ensure that all the work done around both Bills will not be lost.

‘Obviously today’s judgment will require scrutiny and full consideration. Local government must have a meaningful role in whatever comes next and as a valued sphere in the governance of Scotland.’

‘As set out in the Scotland Act 1998, the Scottish Parliament cannot legislate outwith its areas of competence,’ he said.

‘As we have been clear, our concerns were never to do with the policy of the Bills, but about whether they are within the legislative competence of the Scottish Parliament.

‘We will continue to work collaboratively with the Scottish Government to address any competence concerns with future Scottish Parliament legislation.’