The outline can be seen of the powerful new vessel China hopes will allow it to challenge the US, which recently accused it of a "campaign of bullying". 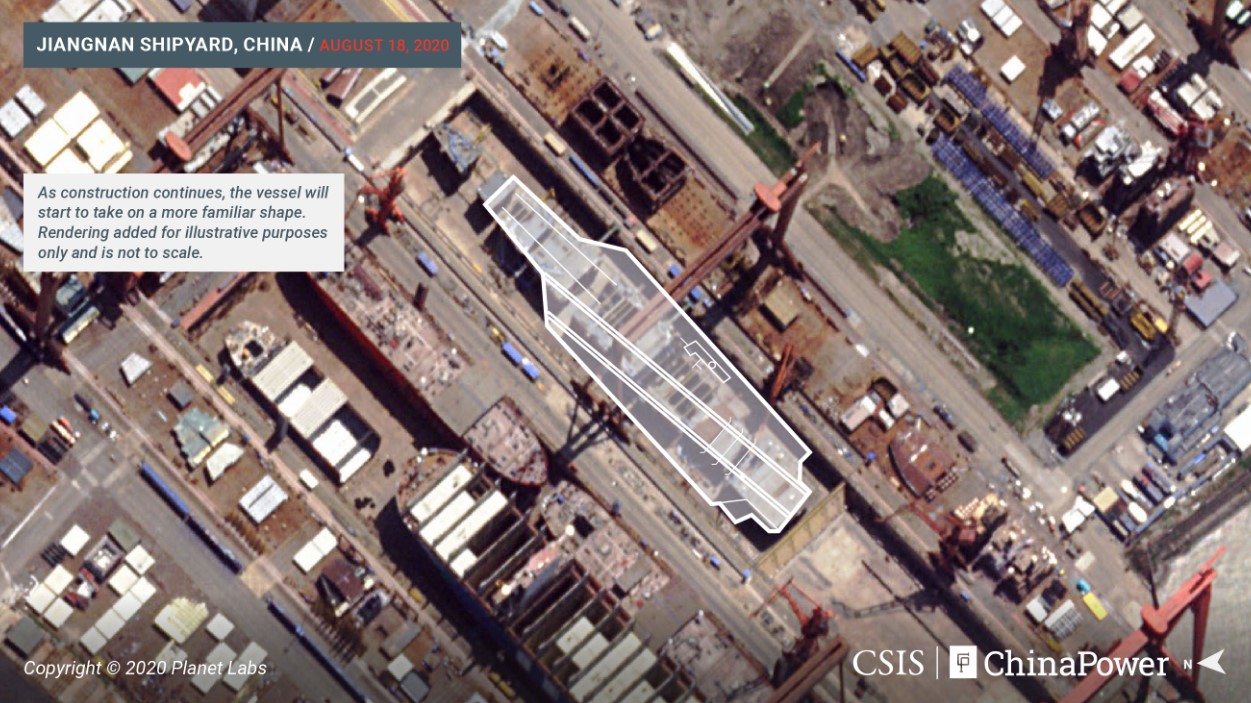 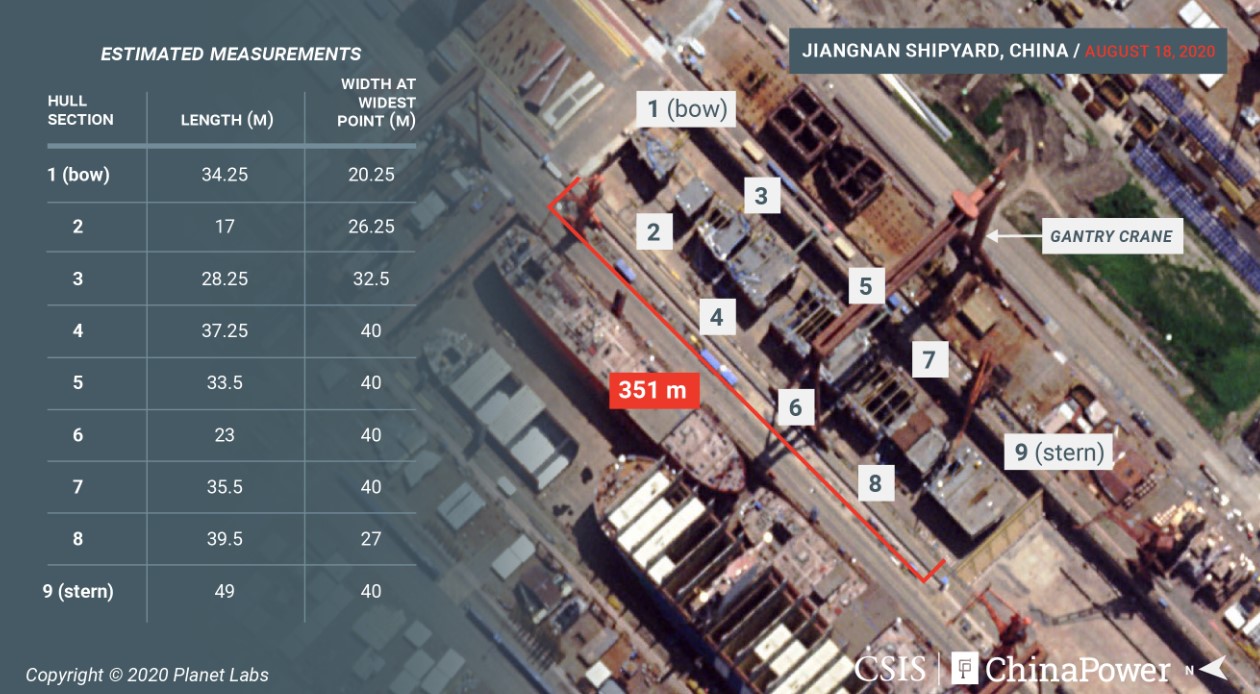 The pictures were revealed by the Washington-based think-tank the Center for Strategic and International Studies (CSIS), which last year confirmed the rumours the ship had been commissioned.

China already has two aircraft carriers that are based on aging designs dating from the era of the Soviet Union, both weighing 60,000 tons.

But the new ship is expected to be a 80,000 ton ‘supercarrier’ more resembling those in service with the US Navy and fitted with modern technology.

There has been speculation the third carrier will even have a futuristic electromagnetic catapult launch system that features on the latest US carrier, the USS Gerald R. Ford.

The CSIS says the hull is currently 974ft long, but that will increase significantly with the addition of a flight deck and its widest section measures 131ft 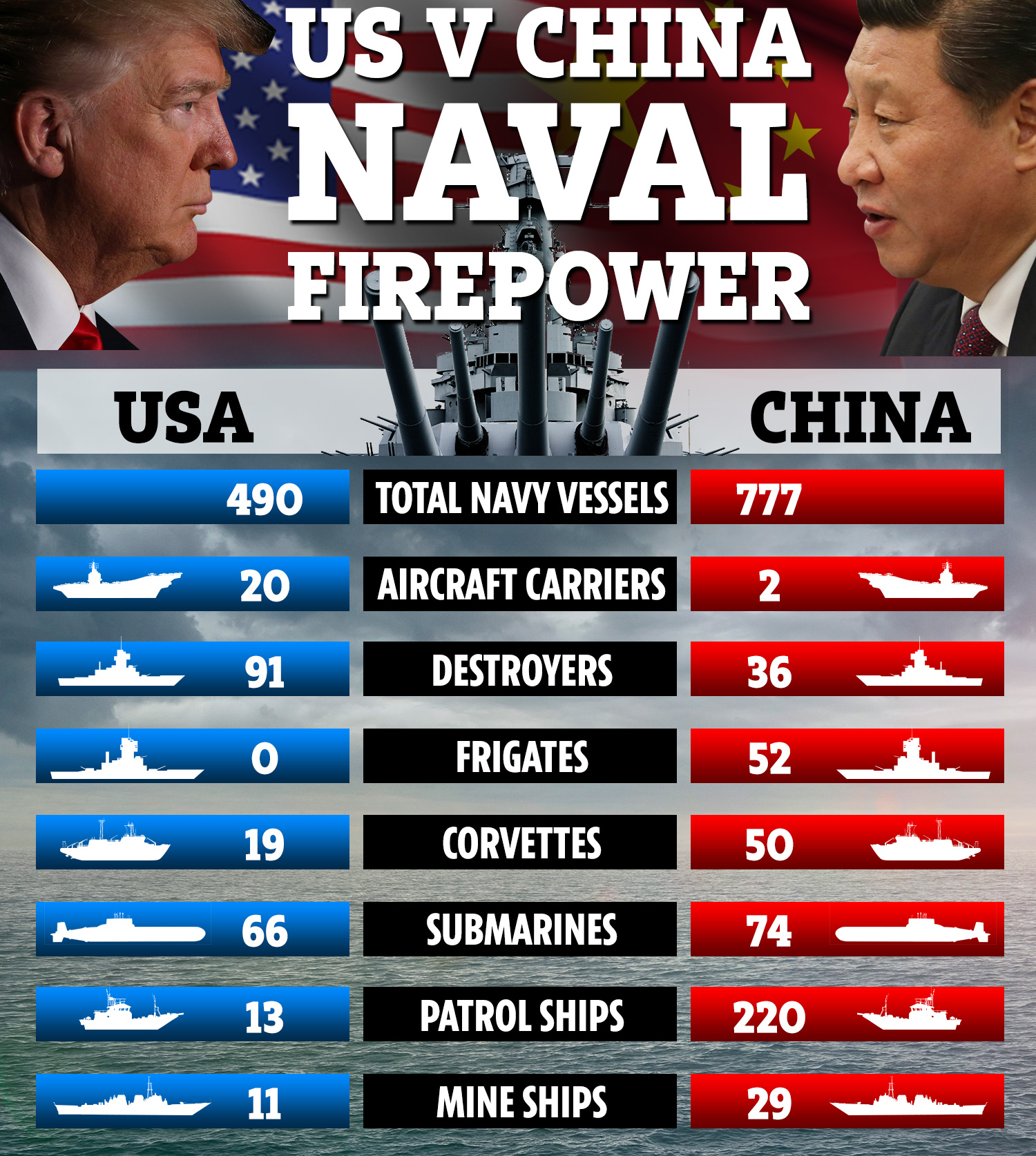 The new ship, dubbed the Type 002, is currently in nine hull blocks sitting in a dry dock at the sprawling Jiangnan ship yard complex but the outline can clearly be made out.

China has been pursuing an aircraft carrier fleet in a bid to match US Navy's until now unassailable power, as the two sides square up over the territorial dispute in the South China Sea.

It also sees them as part of a strategy that will also allow them to see off any attempt by the US to come to the aid of Taiwan in the event it invades the island.

Matthew Funaiole, a researcher at the CSIS ChinaPower project, told the Washington Post “the Chinese are showing tremendous capability of designing and fitting out vessels”.

“It’s moving along on pace. It’s impressive the process they’re going through to position themselves at the forefront of carrier technology,” he said. 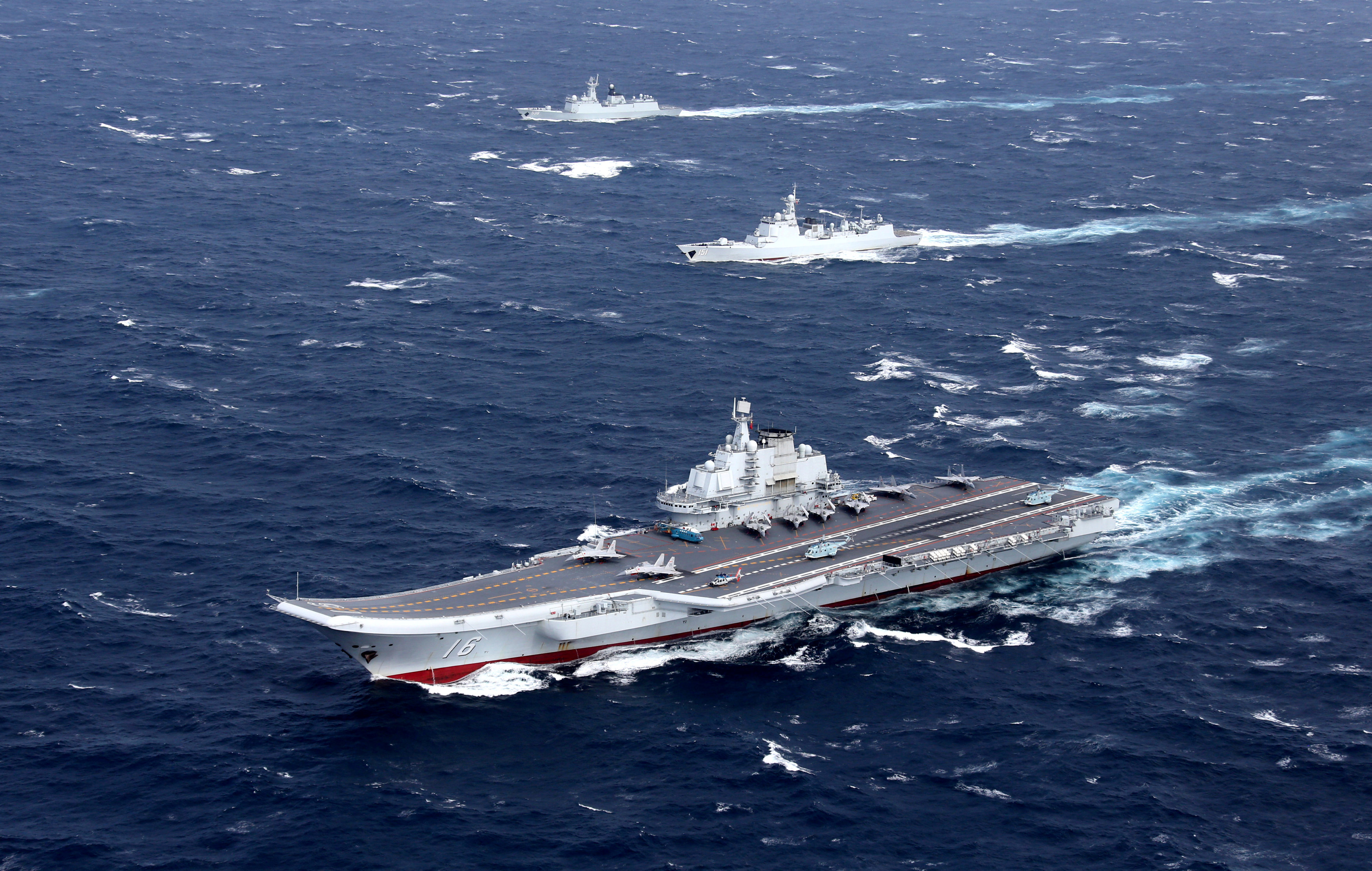 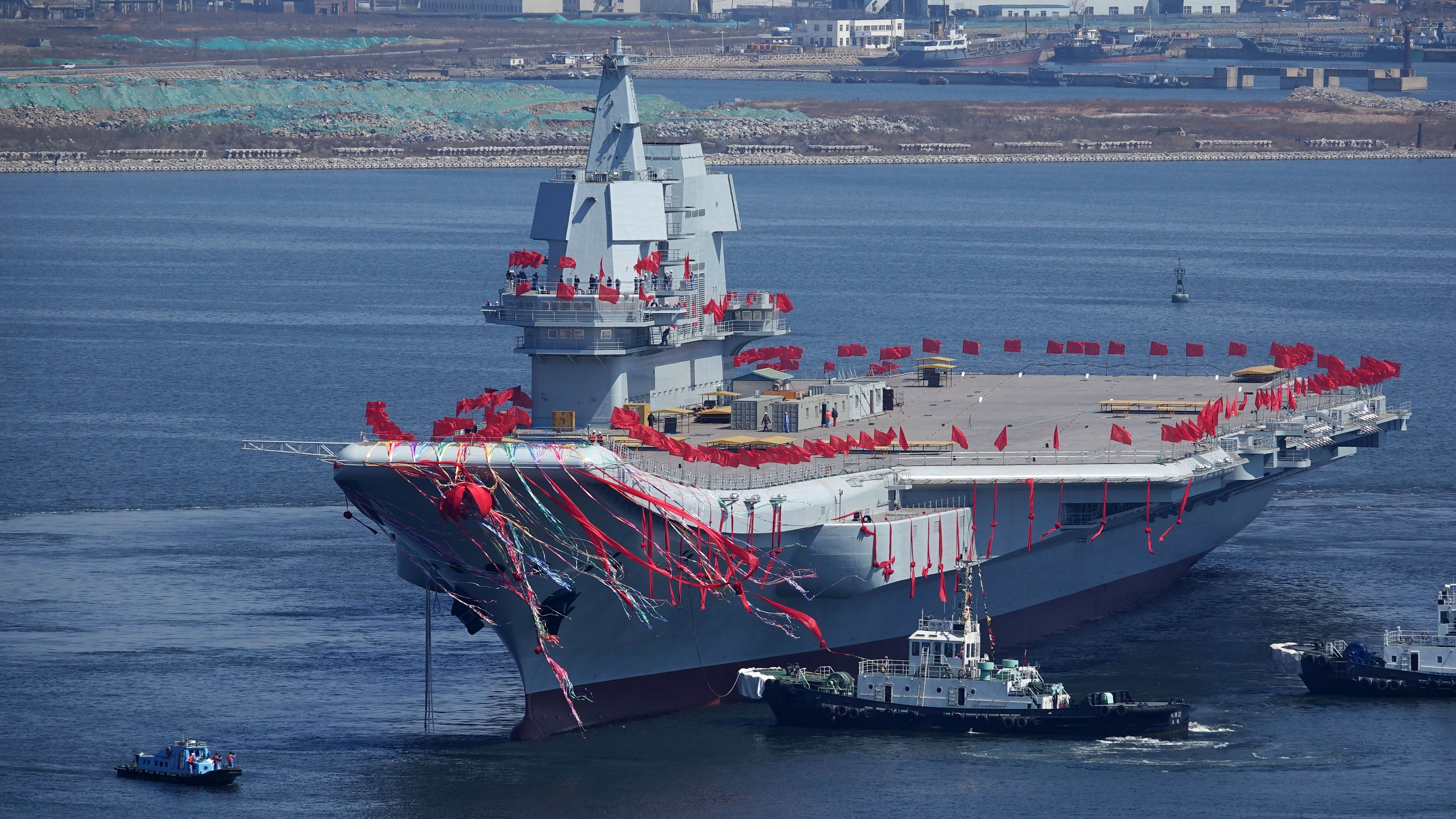 Assembly of the hull is expected to take place over the next several months , says the CSIS.

Once the hull and superstructure are assembled, the dry dock will be flooded and the carrier will enter the water.

The vessel is then likely to then move to another location for fitting out, before entering service in 2023.

The effort to build a large, locally designed carrier is seen as a core part of China's extensive military modernisation drive.

The Chinese Navy’s first carrier, Liaoning, is actually a Soviet-era aircraft-carrying cruiser built at the end of the Cold War and then sold to China.

Its second one Shandong is slightly bigger and was built to carry a more aircraft but it was still based on the Soviet design.

According to recent reports, the Chinese are seeking to build a fourth aircraft carrier.

It has also unleashed a fleet of new destroyers which has the power to wipe out US warships in the South China Sea.

Military experts say the news proves the superpower's naval development has entered a "crucial new stage" amid mounting tensions in the disputed waters. 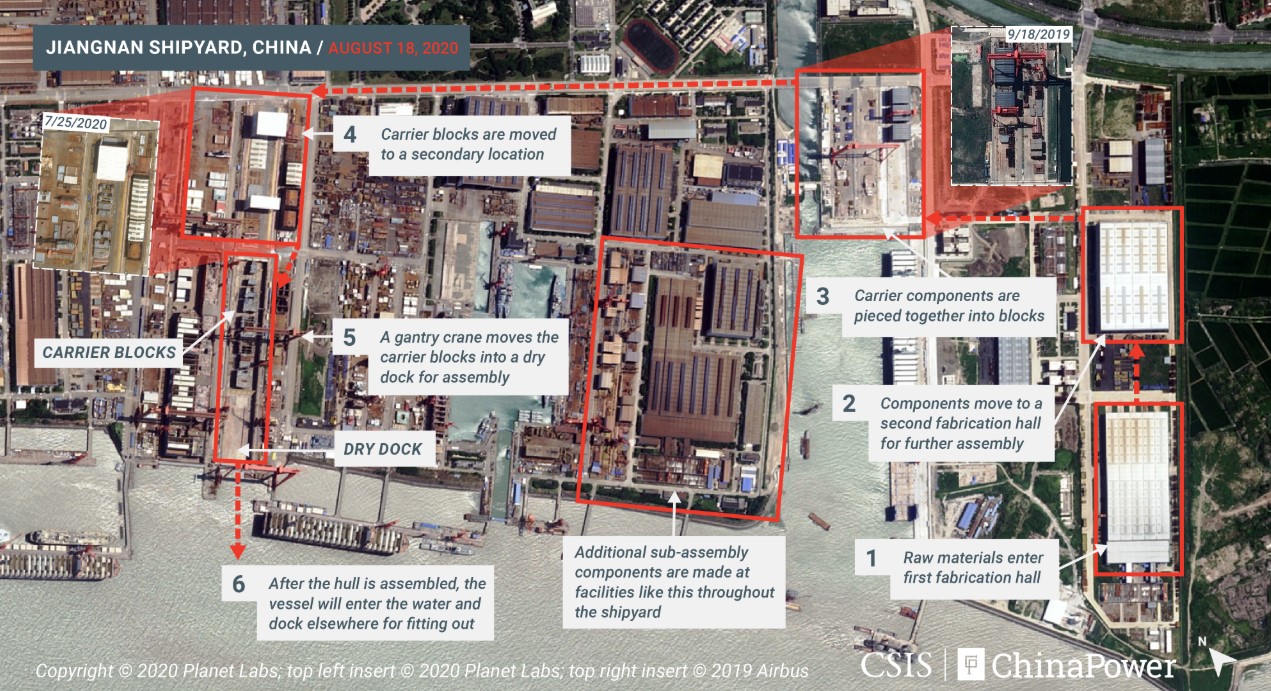