New York: New York state shattered its record for new infections, reporting 85,476 COVID-19 cases as new mayor Eric Adams declared New York City “open and alive” and that it will “not be controlled by crises”.

In his first speech as the city’s 110th mayor, Adams pledged to unite New Yorkers and root out waste and inefficiency, all while overcoming a resurgent COVID-19 outbreak that’s hitting the city hardest in the state. 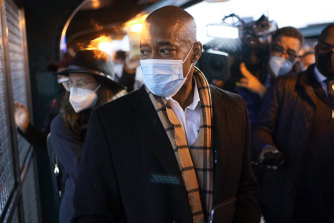 New York City mayor Eric Adams looks at a fight on the street while waiting for the subway to City Hall on his first day in office. Adams called the police to report an assault in progress. Credit:AP

Adams was sworn in just after midnight on New Year’s Day in Times Square, seizing on one of New York’s most iconic events, the annual New Year’s Eve ball drop. He said he wanted to remind “New Yorkers and the world” that “despite COVID-19 and its persistence, New York is not closed.”

Adams urge the city’s nearly 9 million residents to make a New Year’s resolution that their lives not be controlled by the pandemic. “Getting vaccinated is not letting the crisis control you,” he said at City Hall.

But the scope of the challenges Adams faces became clear within just hours of his taking office. The first meeting of his cabinet focused heavily on the city’s viral outbreak, with more than 40,000 cases recorded per day in the city in recent days. 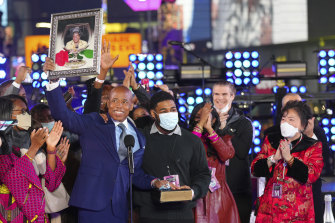 Eric Adams holds up a framed image at his swearing-in as New York mayor at the Times Square New Year’s Eve celebration. Credit:AP

On Saturday morning, as Adams prepared to board a subway train in Brooklyn to make his first official trip to City Hall in lower Manhattan, he saw a fight taking place on the street below the platform and called 911. Police officers drove by, but didn’t intervene.

On the train, Adams encountered an apparently intoxicated man and another sleeping on a bench.

A few hours later, shortly after Adams delivered his brief inaugural speech, the mayor’s planned schedule was derailed by news that a police officer had been shot and injured, a symbol of the city’s growing gun violence problem. Adams and the new police commissioner Keechant Sewell visited the officer at a hospital in upper Manhattan.

Addressing reporters outside the hospital, Adams said he wanted to send a “clear message” that “this is not a city of disorder, a city of violence”.

“I want to tell our police officers, we have their backs,” he said at yet another press conference, outside a police precinct in Jamaica, Queens. “We are establishing a covenant where we will give them the tools that they need but we are also going to hold them to a high standard.”

Adams takes office at a time of uncertainty, where more than 35,000 residents have died from causes related to COVID-19, and almost two years of closures still threaten the once-thriving tourism economy and commercial districts. The city’s unemployment rate, 9 per cent, is the highest since 2013.

Even as the Omicron variant overwhelms the city, Adams said New Yorkers needed to be less fearful, for the economy and their own mental health.

“We have to really be careful of the hysteria that many people are feeling,” Adams said. “We’re not doing what the southern states are doing which is totally disregard COVID.”

“We’re saying let’s be smart and practical, but we have to live our lives.”

Across the Atlantic, England authorities also reported a record number of new COVID case numbers – 162,572 – a slight increase on the 160,276 the previous day. There were 154 new deaths from the virus, down from 178 on Friday.

France became the sixth country in the world, after the United States, India, Brazil, Britain and Russia, to report more than 10 million COVID-19 infections since the outbreak of the pandemic, according to official data on Saturday.

French health authorities reported 219,126 new confirmed cases in a 24-hour period, the fourth day in a row that the country has recorded more than 200,000 cases.

French authorities announced on Saturday that children aged six and older will have to wear masks in indoor places open to the public.

French Health Minister Olivier Veran said on Sunday the isolation period for fully vaccinated people who test positive for COVID-19 would be cut to seven days from 10 days.