Singapore: The Hong Kong police arrived before reporters had a chance to get to their desks. At 7.30am on Thursday, they blocked the entrances to the newsroom of the Apple Daily, arrested the editor in chief, CEO, and three other editors and executives.

For the second time in 12 months 200 police officers searched the newsroom for evidence the company had breached Hong Kong’s national security laws. Its reporters filmed the last gasps of the newsroom through the roof, live-streaming as police combed the halls of Next Digital, the newspaper’s parent company. 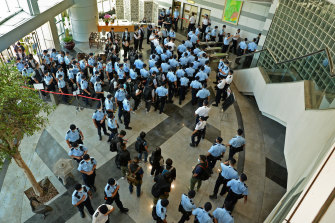 Police officers gather at the lobby of headquarters of Apple Daily in Hong Kong on Thursday. Credit:Apple Daily

Jimmy Lai, the billionaire Hong Kong maverick who founded the company, has already spent almost a year in jail on national security charges. His case was moved to the High Court on June 15, when he faces the prospect of life in prison. Hong Kong authorities allege he colluded with foreign powers to impose hostile measures against Hong Kong as China implemented sweeping national security laws that have been condemned by Europe, the United States and Australia.

“This time it creates much greater terror than last time,” said an Apple Daily editor who asked only to be referred to as K because of fears for their safety.

“Even the editor-in-chief was arrested and they are going to seize news material. Last time they were not targeting day-to-day news activity.” 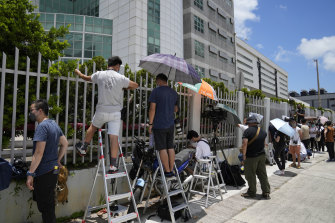 Reporters waiting outside Apple Daily on Thursday morning as police combed through files inside. Credit:AP

Anxiety had been building throughout the newsroom for months before the arrest of editor Ryan Law, associate Publisher Chan Pui-man and platform director Cheung Chi-wai and two other executives on Thursday.

The attention of authorities had switched from the activities of Lai, who met with former US vice-president Mike Pence and secretary of state Mike Pompeo in 2019, to the reporters and editors that put out his flagship product.

Up to 10 per cent of reporters in some divisions had resigned since Lai’s arrest. Rumours that the newspaper would be banned by July 1 flew around the company, prompting some editors to suggest that staff should take measures to minimise their own risks.

K said if Chinese authorities went after articles criticising the national security laws – some of which they had written – “it would be a nightmare”.

“The problem is, for employees still staying with the company, we don’t really know if a resignation is useful to avoid any consequences,” K said.

Those fears appeared to have been realised by Thursday afternoon. 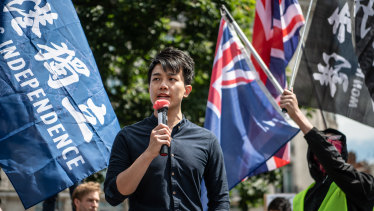 Lau called for global South-African style apartheid sanctions to be levelled against China to deplete the resources of the Hong Kong government and for foreign judges to boycott Hong Kong’s Court of Final Appeal, where Lai’s bail appeal was heard in January.

The court is made up of local and non-permanent foreign judges, but no foreign judges were allowed to hear the national security case.

“This is simply endorsing the regime in the legal system and the judiciary,” said Lau. “The National Security Law has crippled the rule of law. The judges have to leave as soon as possible.”

“I truly believe they should leave,” said Hui. “The law is only used as the manipulating tool.”

French said he believed the Hong Kong Chief Justice and resident judges of the Court of Final Appeal are committed to maintaining the independence of the judiciary.

“My continuance in office as an non-permanent judge reflects my support for that commitment and belief in the ability of the court to give effect to it,” he said when contacted last week. Gleeson could not be reached for comment.

Stuck outside Lai’s newsroom on Thursday, fearing for their colleagues and blocked from accessing the printers housed in the same building, the reporters and editors of Hong Kong’s only remaining pro-democracy newspaper had one last question.

How are we going to get the newspaper out on Friday?

“The editors of our team said all daily work must carry on as usual,” said K. “The best way to face unknowns and terror is to keep doing what we always do.”