Motorist who ran over and killed woman, 29, as she lay collapsed in the road then dragged her body for 150ft before realising she was going slower is banned from driving for 12 months 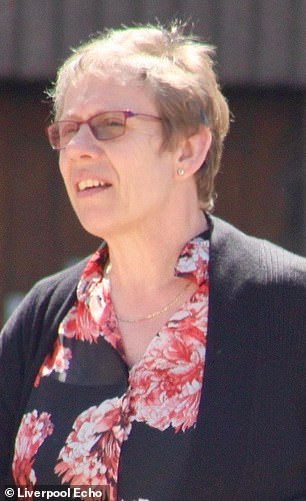 Christine Hannah, 57, drove over what she thought was a builder’s-type bag on March 15 last year

A motorist who ran over and killed a woman as she lay collapsed in the road has been banned from driving for 12 months.

Christine Hannah, 57, drove over what she thought was a bag on March 15 last year, but it was unconscious Kirsty Upton, 29, who had been lying in Church Road, Tranmere for less than a minute.

Hannah’s silver Ford Fiesta dragged Ms Upton along for about 130 feet before she got out to investigate as her car seemed to be going slower.

But not seeing any reason for that, she continued for another 20 feet before stopping again and finding the body trapped beneath her car, Liverpool Crown Court was told.

Yesterday, a jury unanimously convicted Hannah, of Wirral, of causing death by careless driving after two hours of deliberations.

Hannah had savings and will pay the amount within 28 days, the court was told.

Judge Driver told those in the public gallery that any sentence he would pass would never be comparable to the life of Ms Upton.

He added: ‘I can see they [Ms Upton’s family] are in a deep state of grief.

‘This is clearly a case where [there has been] careless driving for a very short period of inattention.

‘There must be a disqualification.’

Sentencing her, Judge Driver said: ‘In this case, Kirsty Upton, who was 20, lost her life.

Guidelines indicate that a conviction for causing death by careless driving can result in a sentence ranging from a low level community order to three years in prison.

Aggravating factors would include other offences committed at the same time, such as driving other than in accordance with the terms of a valid licence; driving while disqualified; driving without insurance; taking a vehicle without consent or driving a stolen vehicle.

How many people killed as a result of the offence will be taken into account, as will any irresponsible behaviour, including failing to stop or falsely claiming one of the victims was responsible.

‘Though she had problems in her life, it was as important and valuable as anybody else’s and her family remain deeply in grief.’

He added: ‘The defendant was a woman of very good character, driving to work at a speed limit, in poor light and rain, when something unexpected happened.

‘Kirsty Upton had collapsed in the road, she’s been there for less than one minute. It was terrible luck for Kirsty and as a result catastrophic for her and her family, while also catastrophic for this defendant.

‘But her driving fell below the required standard.’

Ms Upton had been near St Catherine’s health centre in her pyjamas and dressing gown just before the accident. Although it was not known why she had collapsed, she had recently been known to suffer from fits, prosecutors said.

Barrister Jonathan Duffy told the jury: ‘She [Hannah] failed to exercise sufficient care and attention in her driving.

‘Tragically, rather than taking avoiding action such as slowing down until she could see precisely what was in front of her, or by deviating from her course to drive around, she carried on and drove over the obstruction.’

In a statement to police, Hannah said she had seen what she thought was a bag in the road, but could not avoid it as there was an oncoming vehicle.

However, CCTV showed there was no such vehicle.

Hannah, of previous good character and who had a clean driving licence, said she was at a loss to know why somebody would be lying in the road.