More than 26,000 join UK’s land army to pick fruit and vegetables at farms across Britain as they face a season without workforce

Thousands of people have applied to pick crops on farms to plug the labour shortage of overseas workers prevented from coming to the UK because of coronavirus travel freezes.

More than 26,000 have answered a call to arms to ‘help feed the nation’ by ensuring there are enough workers to pick fruit and vegetables before they go rotten.

They were was sought by three labour firms – Fruitful jobs, HOPs and Concordia – who joined forces to urgently drum up a sufficient workforce.

The providers claim to have been ‘overwhelmed’ by the ‘massive’ response and have been had to turn down some hopefuls.

In a letter to a 53-year-old man who went freelance before the pandemic, one firm said placements were filled up until the end of May. 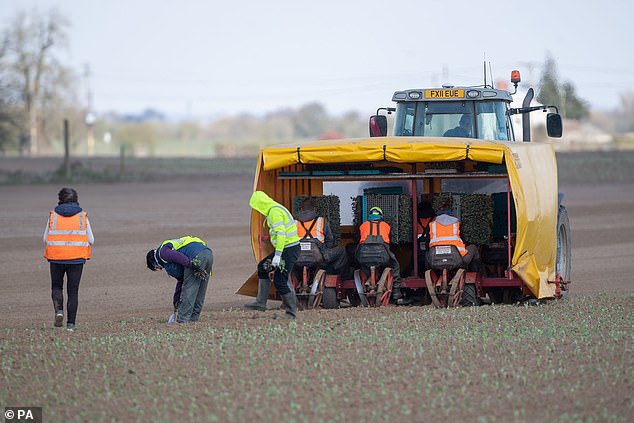 Workers plant crops in a field near Boston, Lincolnshire, as thousands of people applied to pick crops on farms to plug the labour shortage of overseas workers prevented from coming to the UK because of coronavirus travel freezes A farmer drills seeds in a field near Castor, Cambridgeshire, as more than 26,000 have answered a call to arms to ‘help feed the nation’ by ensuring there are enough workers to pick fruit and vegetables before they go rotten

It added: ‘We are speaking with farms on a daily basis and looking at gaps further along the season.

‘We will be in touch with applicants as we have placements become available.

‘We really appreciate the massive response and we are sorry that we cannot help everyone, if we can we will be back in touch.’

According to the British Growers Association, 70,000 seasonal staff a year are needed.

Rachel Hubbard, from Fruitful Jobs, said: ‘At the heart of the alliance of HOPs, Concordia and Fruitful Jobs is to ensure we can support our growers, ensuring the farming sector receive all of their labour requirements for the forthcoming ‘busy’ season of May – August.’

Furloughed staff have the right to seek work elsewhere during the shutdown as long as they have the permission of their main employer and are able to complete any training required of them while stood down.

Guidance published on the Government’s website says those on furlough who take on new work must be ready to return to their normal job at any time and must complete the relevant paperwork making their situation clear to HMRC. 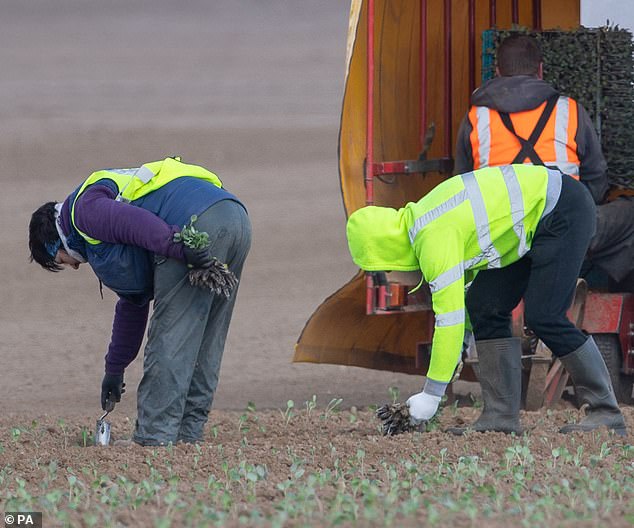 According to the British Growers Association, 70,000 seasonal staff a year are needed (Boston, Lincolnshire, pictured)

Nigel Jenney, chief executive of the Fresh Produce Consortium, the UK’s fresh produce industry trade association, welcomed the interest, but said it must translate to people being trained up and going out to work on UK farms.

He said: ‘What we need to ensure is that that interest becomes a reality and people do support both the harvesting and packing of the fruit and vegetables in the coming weeks and perhaps months in the UK.’

As for produce coming from Europe, he said consumers could be ‘confident’ there will be enough coming in but said people may have to make compromises on some of their usual items.

He said: ‘It is certainly a challenge and will remain a challenge for some time but I think for the foreseeable numbers of weeks consumers should be confident they’ll be able to get a range of fresh produce.

Mr Jenney invited people to visit the recently launched On Your Doorstep website, which he said is aiming to help put local businesses including bakeries and butchers in touch with customers directly.

He said the aim was to give smaller independent businesses which have been hard-hit by the consequences of the coronavirus shutdown ‘an alternative route to the consumer’, linking people with outlets in their local area.